What is it about Spanish Food? 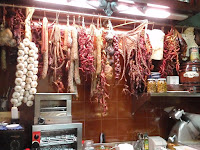 What's the deal with Spanish food? Why is it so darned delicious?

When we first traveled to Spain, the food was something that took us by surprise. Not that we expected it to be bad, or had never tried any Spanish food at restaurants in the U.S....but still...it far exceeded our expectations!

It's always so flavorful, from the simplest, homemade style dishes to cheap fried food all the way up through gourmet and "molecular gastronomy". I have eaten in roadside stands and airport cafes with tasty food. I think I've only had one bland dish in the country. And, that's all done without being particularly "spicy" (caliente) either. Of course, garlic and salt are not lacking, along with great olive oil and other spices like pimienton and saffron.

Like any culture where you find good food, a lot of it goes back to the ingredients. You'll see "according to the market" on a lot of menus, and menu del dias changing to reflect the seasons or even daily market finds. Abundant, fresh produce abounds, mostly at city markets and fruiterias...why bother with buying that stuff at the grocery store (which is often imported from elsewhere too)? I often filled up a large bag full of produce for a few Euros at the vegetable market in Denia. I saw a local fruiteria selling 25 kilos of potatoes for 6 Euro--seriously!

At the same time, the cooks obviously take pride in cooking things well and creating delicious flavors. The aromas nearly kill me when I'm in Spain...my mouth starts to water and my stomach starts to growl...

The other thing about Spanish cuisine is that the diversity and regionality of the country has produced such a diversity of good dishes. Paella may be the most identified dish of Spain world-wide, which I feel is a bit unfortunate (wait, it's not because I don't like it, it's because I love it--read on...). It has led to some really crappy paella being served, often in Spain...but typically outside of the "paella region" of Valencia. Spanish restauarants in Madrid and Barcelona have to cater to tourists' desire for paella, so they buy pre-packaged mixes or come up with something with little resemblance to the "real thing" (if you haven't had the "real thing" it will undoubtedly seem delicious but trust me on this). And, horror of horrors, many places serve it for dinner...which is your first bet it is not authentic. Rice dishes are for lunch, as any good Valencian knows. There's nothing like a large serving of starchy deliciousness served up with some wine to get you in the mood for that siesta:-)

However, those regional dishes, when done right and especially when eaten in situ, mean that this is a country with all kinds of specialties. It seems each town has its special sausage. Though less well known worldwide, the cheeses and wines of Spain are gaining popularity with many high quality regions. Along the different coasts, you'll find an amazing diversity of seafood made in a wide array of preparations. As much as I liked calamari before coming to Spain, I rarely order it anywhere else now, I'm just too spoiled. My hubby thought it always had the "rubber band" texture and was amazed to find it so tender that you rarely need a knife to cut it most places in Spain.

My best advice...get to Spain if you like food. Find Spanish food products in some of the gourmet or specialty stores in the U.S. in the meantime. Find out what the regional specialties are when visiting Spain and don't miss those (there are plenty of dishes that are generally good everywhere, particularly a lot of the simple tapas...but don't miss what the area or restaurant is known for...you won't be disappointed). And, try things you aren't usually "in to" (calamari being case in point for hubby, ham being case in point for me). Oh, and don't even get me started on the ham...you can get an idea of the national obsession by viewing my "homage to jamon".

Check back soon for some restaurant reviews and specific food recommendations...
Posted by Samie at 2:10 PM No comments: