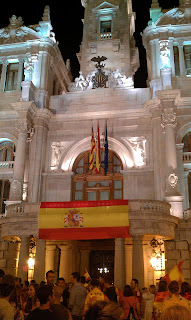 We have truly adopted our "home away from home" country of Spain, including developing a raving passion for soccer (fútbol/football/footie).  We got to attend a local Valencia game at Mestalla stadium, furthering our new-found passion.  So, of course, we have been right there with our adopted countrymen watching the Eurocup 2012.  We planned our schedules to ensure we were at our favorite local hang outs to watch all the matches and the enthusiasm was contagious.

Spain is passionate about its football, as is much of Europe, and Spain's team has consistently delivered with championships.  The Eurocup was to be the "triple crown" for Spain, after winning the 2008 Eurocup and the 2010 World Cup.  With each game, the excitement grew and the red and yellow spread.


We joined in, buying t-shirts and gladly painting our face, arms, etc. with the little Spanish flags (how kind of Cruzcampo to provide handy little paint sticks to the bars!).  In the constant bad news about Spain's economy and the recent "bail out", football provided some positive news and levity (though ardent fans might argue with me about the levity).  In Valencia, this was even more pronounced as horrible wild fires burnt in the province.  People criticized the government cutbacks and the officials' choice of attending the match over visiting the devastated area.  As you can see, the people, stores and bars were all geared up...and hopefully the activity gave some small businesses a bit of a boost.  The "sobre manta" sellers (street vendors, generally illegally selling things they carry or place on top of blankets/sheets, thus the name) stocked up on red and yellow hats, t-shirts, patriotic sunglasses and noise horns.

We chose a local spot to watch the game after we tried in vain to figure out if there was going to be an open air viewing on a big screen (only to see the pictures afterwards of the large crowds at Nuevo Centro and get an email about it from Couchsurfing--oh well!).  We reserved a table and joined a very international crowd, all cheering for Spain however. 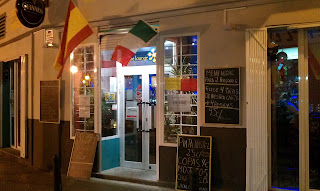 Spain is criticized for being a boring team at times in the media.  I personally would pick a boring, winning team as my team any day--they're effective for sure.  And, boy is that goalie amazing--people were calling for Saint Iker's official beatification on Twitter (the game set a Twitter record for most tweets/second for a sporting event and I loved following the commentary and excitement of some of my fellow "Spain twits").

It was an amazing game for Spain fans.  As this Yahoo News story states, Spain define the word domination both in gaining the three titles and in shutting out Italy for a 4-0 victory.

As soon as the game ended, we went in search of the celebrations.  We had a feeling Plaza Ayuntamiento (Town Hall) would be one of the gathering places, and within a few minutes people begin streaming in to the plaza in all their red and yellow glory.  A big train of guys pushing their friend in a shopping cart, large crowds singing, guys with massive flags on building height poles, and fireworks (of course!)--well, the pictures give you a better idea: 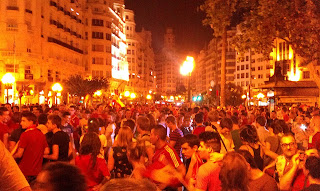 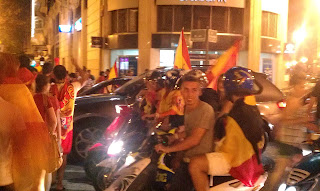 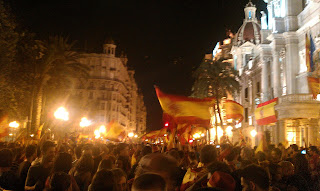 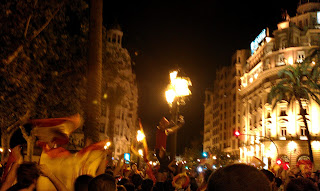 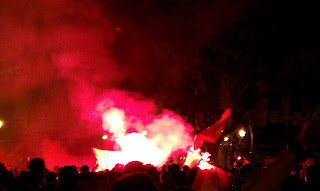 And my three favorite pictures of the night:
A constant round of...
"Yo soy...
...Español
...Español
...Español!" was being sung in the crowds and we joined in many times.  While it may not technically be true, en nuestros corazones somos españoles.  Especially on a night like this one!