Memories of the True Baseball Trip 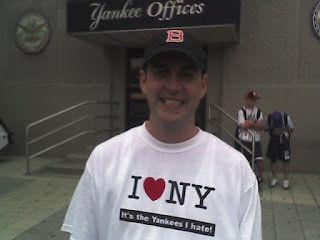 We have done quite a few independent trips to various baseball stadiums, and usually organize them on our own. However, for the Cal Ripken Hall of Fame induction, our research led us to believe in the value of group planning. With huge crowds expected, we were finding it hard to book a room and work out all the details. We were lucky to encounter Sports Travel and Tours on the internet. They put together all kinds of sports themed trips, though their specialty is baseball. Each summer they organize numerous baseball group tours.

Our trip itinerary started in Baltimore, with a visit to the Babe Ruth birthplace and museum--a small place with a big piece of baseball history (especially for two people who grew up near Baltimore and had never been there). The tour company does a good job welcoming everyone as well, with a little reception and kickoff for the trip. We then proceeded to a game at Camden Yards. Of course, this wasn't new for us, but Camden Yards is a must-see stadium. One of the first stadiums built in the now popular style of integrating stadiums in to the fabric and style of the city. It feels old and new all at once. It remains one of my favorite ball parks, though it is often empty nowadays as the Orioles aren't the team to see.

Our next stop was Philly. The Sports Tours incorporate some sightseeing, and so the bus made a stop to visit some of the historic sights. Like any organized group tour via bus, there is not a lot of freedom and you hit the highlights only. Unlike other tours, the main focus here is the baseball. The bus was very comfortable and not full, so each of us had room to stretch out and the ride was comfortable. Our leader was a teacher, and you definitely did not want to be late for "class". His rule was "on time is late". This created some anxiety for me as I pictured oversleeping and being made to sit at the back of the bus. However, our fearless leader was really great--you need that kind of discipline to make things run smoothly and he was enjoyable to talk to and really loved what he was doing (and why not?). The group was more diverse than you might imagine. Our group included: a set of grandparents with a young grandson, several couples of all ages, a father and daughter, a small group of guy friends, and 4 older lady friends as well as some parents and older children.

We saw an afternoon Phillies game. Nice stadium--good food and good crowd! Phillies fans are pretty die hard so the energy is always great. Our hotel was nearby (and the worst of the trip) so we left the game a little early (we were by now learning how we could get some flexibility and independence during the trip) and then took a cab in to the city for the evening. I would not have wanted to come to Philly and only seen the ballpark and the suburban hotel. We went in to South Street and enjoyed dinner and some nightlife--and were home early enough to catch the early morning bus.

Our next stop was NY. A great stadium tour at Yankee Stadium (just as the new park was being built...I'm glad we got to see the old park and all of the history). Love em, or hate em, the Yankee's history is amazing (and my travel partner was lucky not to get any trouble for wearing his "I LOVE NY, Its the Yankees I Hate" shirt, but had it been a game day I'm not so sure).

We did a city tour by bus, which was the worst part of the trip. We had debated getting off at lunch and exploring on our own and we made a big mistake not doing so. It is just no use seeing NY by bus. It's a city to go out and explore. The tour was slowed down by the usual NY traffic, so we got to our hotel just in time for the group to turn around and leave for a Mets game. No thanks! We settled in for a bit and then took the subway to the game (after clearing it with our group)--a much more enjoyable time and riding the subway with the locals made us feel like we were actually in the city instead of peering out from a bus window. I was brave enough to wear my "Real Women Don't Date Yankee Fans" shirt since we were with a different crowd, and it was a conversation starter with the Mets fans on the subway. We met a couple who named their daughter Shea...you can guess why. Also got to see the Mets stadium before its last season...and it was definitely ready for replacement. Even though our time in NY was limited, we did a bit of walking that evening and stopped by the Russian Vodka Room--a great spot! They make great, homemade infused vodkas and authentic Russian food. As good as what we tasted in Russia this past year...

The Cal Ripken induction was by far the biggest memory of the trip. The Baseball Hall of Fame is an amazing place, whether a baseball fan or just intrigued by the history. Induction weekend is crazy in Cooperstown, but being with the travel group made it much better. We had time on our own, but were able to enter the hall as members/VIPS, avoiding a 2 hr. line. We did feel a bit like we were on the Tokyo subway inside, though. Cooperstown is a great little town and on induction weekend, you can visit with a number of Hall of Famers, get autographs and memorabilia throughout the streets. We just enjoyed taking it all in, and even ran in to some people we knew from Baltimore. The crowds were unbelievable. If you drove in, you most likely paid $20-50 to park on someone's lawn and walked a distance. Our group had chairs set up for us, and even passed around some cool rags because it was a scorcher. Some people purchased VIP seats and were right up front. The crowd probably stretched for 1/2 mile up the hill.

The induction ceremony was really inspiring. I've always admired Cal and became a bigger fan that day. He embodies what I think of when I think of baseball and a role model for the kids playing little league. He has continued to do a lot in the community and wants to share that love of baseball.

Tony Gwynn was also inducted and I got to learn more about him and come to admire him as well. There were many fans that traveled all the way across the country, including a mother and son in front of us who had down a whirlwind stadium tour all summer leading up to this. Wow! I was jealous! Though, I have enjoyed spreading our tour out more over the years--that might be a little too much baseball all at once for me. I like to be able to enjoy the cities as well as the stadiums.

I was impressed by Sports Travel and Tours. They did a great job organizing the trip and keeping things on track. Other than our hotel in Philly, all the accommodations were nice and we had good tickets and a very smooth trip. Its not something I would do all the time--we tend to prefer a little more flexibility and adventure, but it was nice to have someone organize everything for you. I would particularly recommend it for big events like the Induction. I know they also do World Series and Superbowl trips, which would probably be worthwhile as well.

We're down to only 8 stadiums left on our quest...and may have to go back after that and revisit some, such as the 2 NY stadiums, that have been rebuilt since. It's a great way to see the U.S., while taking in the American sport...
Posted by Samie at 2:01 PM