Away from it all on Vancouver Island 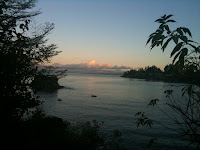 Vancouver Island may be a little out of the way, but it's well worth the trip. There is something about islands that makes them special...that slight inaccessibility lending something that is hard to find in a world where things are mostly convenient and homogeneous. The ferry ride over from Vancouver was a great part of the trip in itself. We took the car ferry--a modern, well equipped, "mini cruise" with plenty of comforts, though the views are the best amenity.

British Columbia is perhaps the most diverse Canadian Province in terms of ecosystems. BC has desert areas, mountains, old growth forests, calm beaches and rain forests and more. Apparently, BC has the world's strongest ocean currents, yet in the Parksville and Nanoose Bay area they have some of the mildest, along with mild ocean temperatures (I would never have guessed the water could get up to 80 degrees Fahrenheit here!).

Some other interesting facts I learned:

The west coast is prone to Tsunamis, though they have been mild and the country has an extensive warning system that works very well.

The world's greatest population of cougars lives on Vancouver Island.

There are many things to do to enjoy the natural beauty of the island:


In addition to the great outdoors, there are interesting shops, museums, places to explore the history of the island's native people, crafts and artisans, tours of the wineries, meaderies, and farmer's markets, and several quaint towns to enjoy. Then, there's the capital city of Victoria...but more on that later...