It is an area less than 3 square miles and 30,000 residents, yet it has its own currency, own language and a history that spans back to long before the Earth was round. Gibraltar, on the southern most point of the Iberian peninsula, has been a British Territory since the 1700s. Driving into Gibraltar we instantly felt we were in a unique and special place in the world. 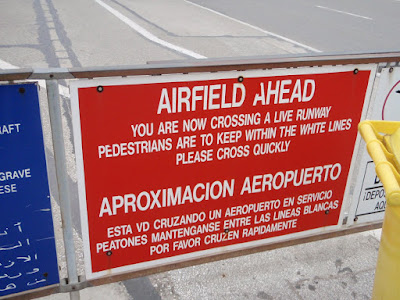 Just after crossing the boarder our bus had to cross over the live and active runway of the Gibraltar airport, holder of two Guinness World Records for only airport with a main highway crossing the runway and closest airport to a city center. Crossing it is also the only way in and out of town. The road and pedestrian walkway close when a plane is taking off or landing. If you are in the middle of crossing at this time, the gates go down, the siren sounds and you better hurry!


The main attraction here is, of course, The Rock of Gibraltar. One of the two Pillars of Hercules, it was at one time thought to be the end of the earth. 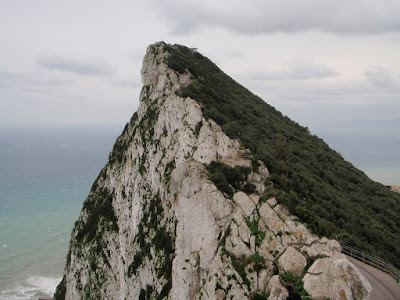 The Rock of Gibraltar is full of sites, beyond it's vast and unique views of the world. A quick hop into a guided taxi and you are on your way up. Not of the faint of heart, the road is narrow and treacherous. Within a few minutes, you are at the top where you see Europe, Africa, the Atlantic Ocean and the Mediterranean Sea all at the same time. Truly stunning! 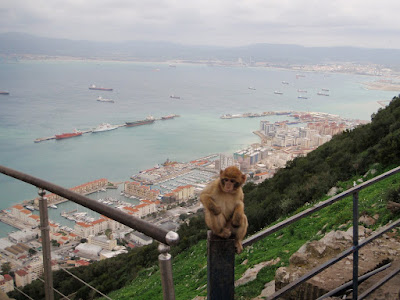 We met the famous Gibraltar monkeys who are cute, wild, seemingly always hungry and make you feel as if they think you are there solely to see them. They roamed around and one even jumped on our taxi as if asking if he could come along for the ride... or maybe he just wanted some food, we weren't sure.

We then walked thorough a narrow tunnel (past the gift shop)and were inside the The Rock, St. Michael's Cave to be exact. This cave is full of Stalactites and Stalagmites formed over thousands and thousands of years. It's dark and wet inside the cave system. They pump classical music through the sound system, which is kind of cheesy, but then you see the stage and the seating built into the rock. There only a handful of concerts there per year, mainly in summer, and we imagined ourselves sitting inside this cave listening to a concert... the acoustics, the setting, the history of this unique place... wow.

From the natural caves, we headed into the man-made system. The English, during WWII, knew that losing the tiny, yet extremely strategic Gibraltar would be devastating to the Allies. So, they built a vast city of tunnels inside The Rock. The tour of these tunnels is fascinating and terrifying at the same time when you think of the thousands of soldiers that lived in them and the constant threat of siege. We left the tunnel system and hopped into a van that looked like it had been there since before WWII and started the drive down. The driver's only rule for the van was “don't scream”. Like a theme-park ride, except you know it's real, we descended down the two-way, but one lane switchbacks dodging and barely missing other cars, scooters and pedestrians and finally landed in the center of town.

Happy to be on our own and on foot after the ride down, we walked down Main Street. The architecture, shops, pubs, restaurants really made us feel like we were in England. Wait... this isn't Spain anymore, we are in England. We had lunch in a traditional English pub with its smokey bar, edible food, and bad service... 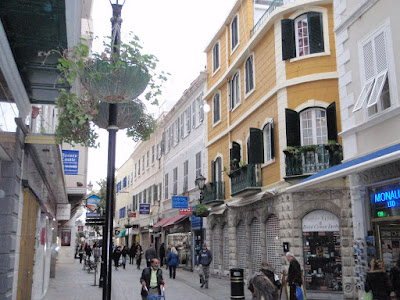 yep, this is England alright, except they drive on the right side of the road here. We spent the rest of the afternoon poking in and out of shops and taking in the sights. We traded a couple Euros for some souvenir “Gibs” - Gibraltar money that, although the same as the British Pound, is only good in Gibraltar. Lastly, we went to the airport and walked across the runway for one of those “only here” moments before getting back on our bus for the 90 minute drive back to Torremolinos in Spain.
Posted by Samie at 9:05 AM