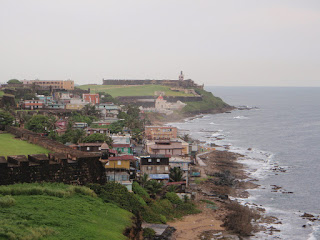 We took the opportunity to spend the holiday weekend exploring a new place (thanks to an email alert about good deals!)--San Juan, Puerto Rico. Puerto Rico is a beautiful island. It is pretty easy to get to from Florida and a nice cross of staying in the U.S. while feeling like you're in a whole different place. I look forward to exploring it more, as I know there are many beautiful spots. For this trip, we stayed in old San Juan and got to explore all of the historic sights, beautiful architecture and lively shops and restaurants.

San Juan feels like being in some small Spanish town, as it should. Puerto Rico's location on the route to the "new world" has made it a strategic spot since its early discovery (in 1493 on Columbus' 2nd voyage) and founding by Ponce de Leon as a Spanish colony in 1508. Two major fortifications were built (La Fortaleza and Castillo San Felipe del Morro) and later, the city was walled in and further protected by Castillo San Cristobal. The island was an ideal spot, along the current of the trade winds and the major island with water, shelter and supplies for ships sailing from Europe. San Juan's deep bay made an excellent port, readily defended.

Puerto Rico became a U.S. territory in 1898 and its future fate may be considered again soon by its residents. President Obama made the first presidential visit in 50 years recently and offered his support to the residents' decision, possibly on statehood. It was interesting to contemplate the island's history and future as we visited over Independence Day weekend.

We really enjoyed walking all over the small town, rambling through the cobblestone streets (check out this picture of the unique blue cobblestones and explanation of their origin), peaking in the shops, photographing some of the beautiful buildings and enjoying plenty of good meals.

Castillo San Cristobal offered beautiful views of the surrounding seas and overlooking the town, as well as a glimpse in to history. I especially enjoyed going in to the observation posts created during World War II, with small windows to spot approaching threats. We walked around the city walls several times, and enjoyed taking in the view from El Morro as well. I enjoy old cemeteries, and San Juan has a beautiful one right at the water's edge. (Really-don't be spooked by them-you're missing out. They can be so beautiful and interesting. I spent a long time wandering through one in London, looking at the inscriptions and different grave stones. My favorite inscription: "Got her wish-gone to nag him." I hope she's haunting someone over that!)

The colorful buildings in San Juan give the town a bright, Caribbean feel with an interesting mix of architecture. There are numerous outdoor cafes and tons of jewelry and souvenir shops for the cruise ship visitors. I had fun window shopping and met the friendliest ladies in a local shop selling miniature replicas of the old houses and buildings of San Juan ("Feel free to ask us anything. It doesn't have to be about the shop, anything about San Juan...").

We stayed at the Sheraton, which was pretty standard but recommended for its great location to explore the town. We barely walked through the casino, but the on-site restaurant came in handy for brunch when we were hit with a deluge on Sunday morning. Three cruise ships were in port on Sunday, but the sites didn't seem completely overwhelmed (we ventured out after the flood receded).

We had a lot of good food...too much, in fact. A few places we tried that I would recommend: on Fortaleza St., the main shopping artery-Pirilo (good pizzas, tasty Puerto Rican tapas and creative drinks), Marmalade (a bit pricey, but unique takes on classics, very inventive), Pieria (good tapas) and nearby, Fefo's Deli & Tapas (great mofongo, sandwiches and breakfast). We had a nice dinner in the beautiful courtyard of El Convento Hotel at El Picoteo. It was a great setting and the tapas were quite tasty. After leaving there, though, we spotted Rosa Triana Tasca and visited the next night...it just had that authentic Spanish Tasca look, and didn't disappoint. In no way the atmosphere of El Picoteo, but at the same time it felt like we could be in Spain. And, the tapas were very authentic (with the addition of some Puerto Rican specialties), though the portions were more American (should have ordered much less!).

We also made the obligatory stop at the home of the Pina Colada (how did I miss this important historical fact that the drink was invented here?!?...though the details are open to some dispute apparently), Restaurant Barrachina. Regardless, it was tasty and sometimes you just have to be a tourist!

To view the rest of our pictures, check out our San Juan gallery.
Posted by Samie at 1:39 PM