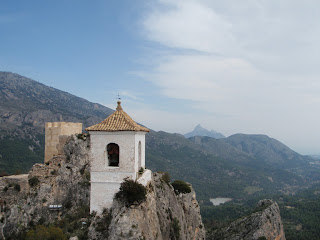 El Castell de Guadalest is a small town in the Valencia Region, Alicante Province.  It is about 25 km inland from Benidorm on a stretch of road not for the weak of stomach.  The town has a tiny population (around 200) and survives on tourism.  Apparently, it is one of the most popular day trip destinations in Spain.

To start, the situation and views are amazing (if you aren't the driver concentrating on the hairpin turns, the drive itself is worth the trip...if you don't get car sickness).  You can visit the Baroque church, multiple museums and climb the remains of the 11th century Moorish castle.  You actually pay a small admission to Casa Orduna which is a preserved home on the site, through which you enter to see the castle.  It is a bit of a climb, but you are rewarded with panoramic views of the area. 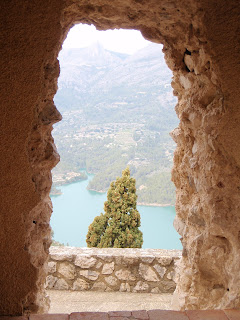 My favorite part was actually the little cemetery atop the castle, with a small ancient section and more recent graves with family information and pictures.  Our favorite was the tiny, old Spanish man dressed in overalls sitting at his favorite bar smoking cigarette, looking peaceful and content (who, by the way, died at age 89). 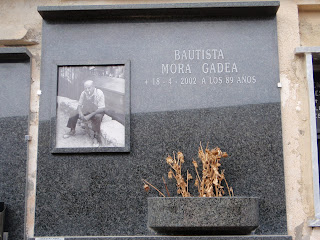 The town has some ten or more "museums", ranging from the torture museum to the microgigante museum (where you can see things like the entire Bible on a peanut--well, maybe not exactly, but something along those lines).  We found it all a bit touristy, but kind of a funny place to spend some time.  Each museum had a small entrance fee, so we stuck to the historical highlights, the views and the torture museum. The torture museum was small, but had a pretty sizable collection.  How does one describe a torture museum?  Enjoyable?  Interesting? Disturbing?  Probably the latter two.  Amazing to think of the efforts people have taken to torture fellow humans over the years.  But, we did get the requisite picture in the stocks. 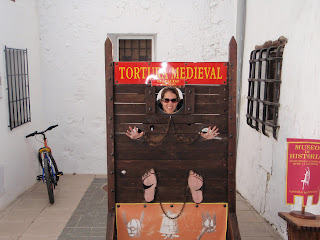 It was a pleasant day to visit, though a bit windy, with sunshine and relatively small crowds since it was off-season.  My conclusion on Guadalest?  Worth a side trip if you are nearby, but I would not rank it up there with any of the top sites in Spain.  If you love quirky museums, you will get a kick out of this place.  It is an enjoyable place to spend part of a day just looking at your surroundings and rambling around town. 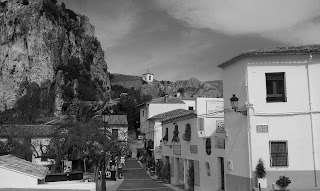