One our last day in Siem Reap, we scheduled a cooking class. This was a great (and tasty!) way to spend the day before our late flight home that night. The class was offered by Le Tigre de Papier, located right on the Pub Street. This place is a restaurant with a designated area on the 2nd floor set up for the cooking classes. What I really like about this cooking class is that you have many choices. We each got to choose our appetizer and main dish from a pretty extensive menu. The group then had to make a decision together on one dessert to make and share.

After making our choices, we set out with our guide to the local market. As we walked through the busy market, she stopped to show us various products and answer questions. We picked up some of the pre-mixed spice packets, campot pepper and more to take back with us in hopes of repeating some of the delicious dishes we had tasted. 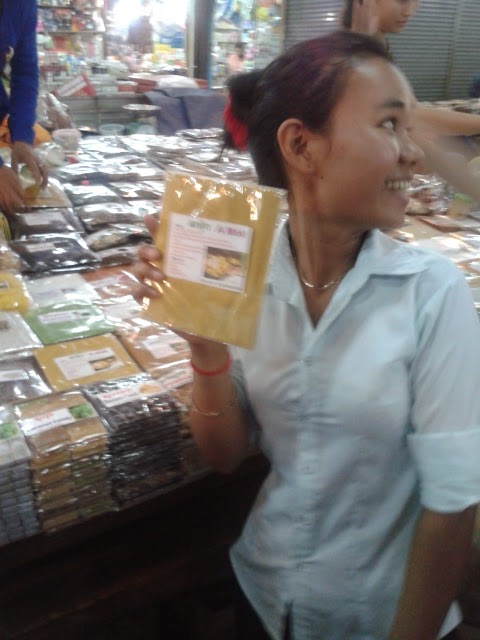 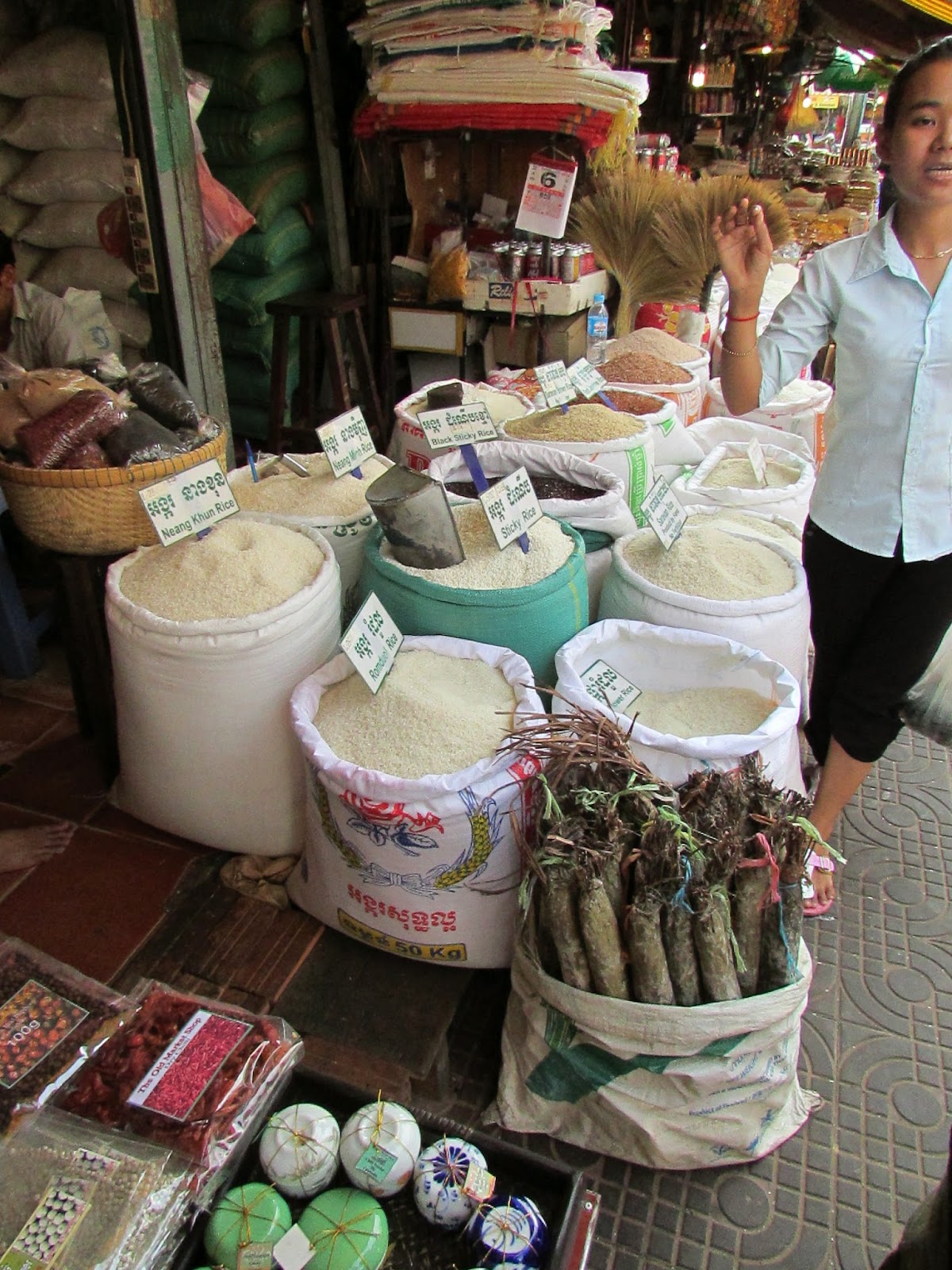 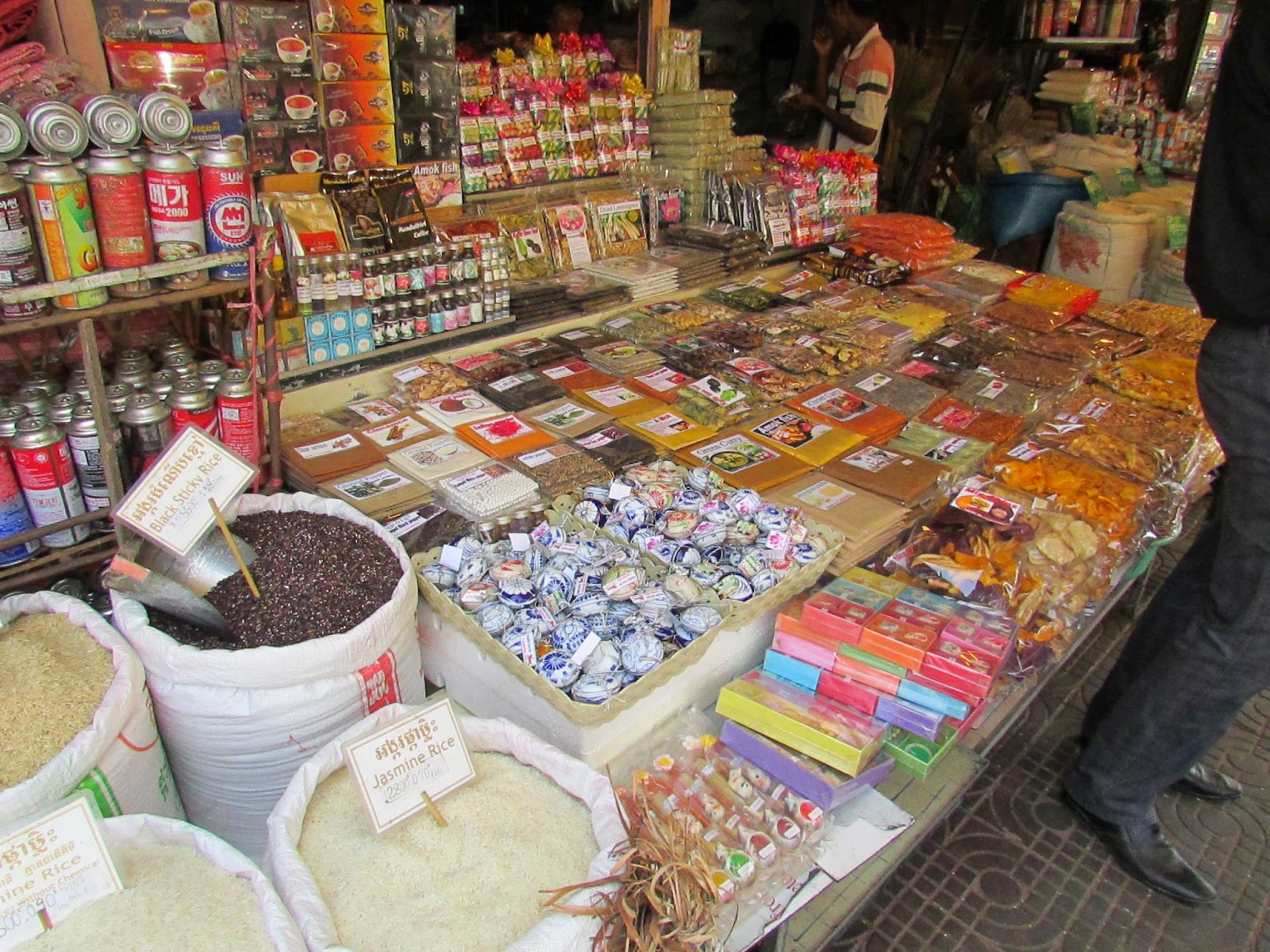 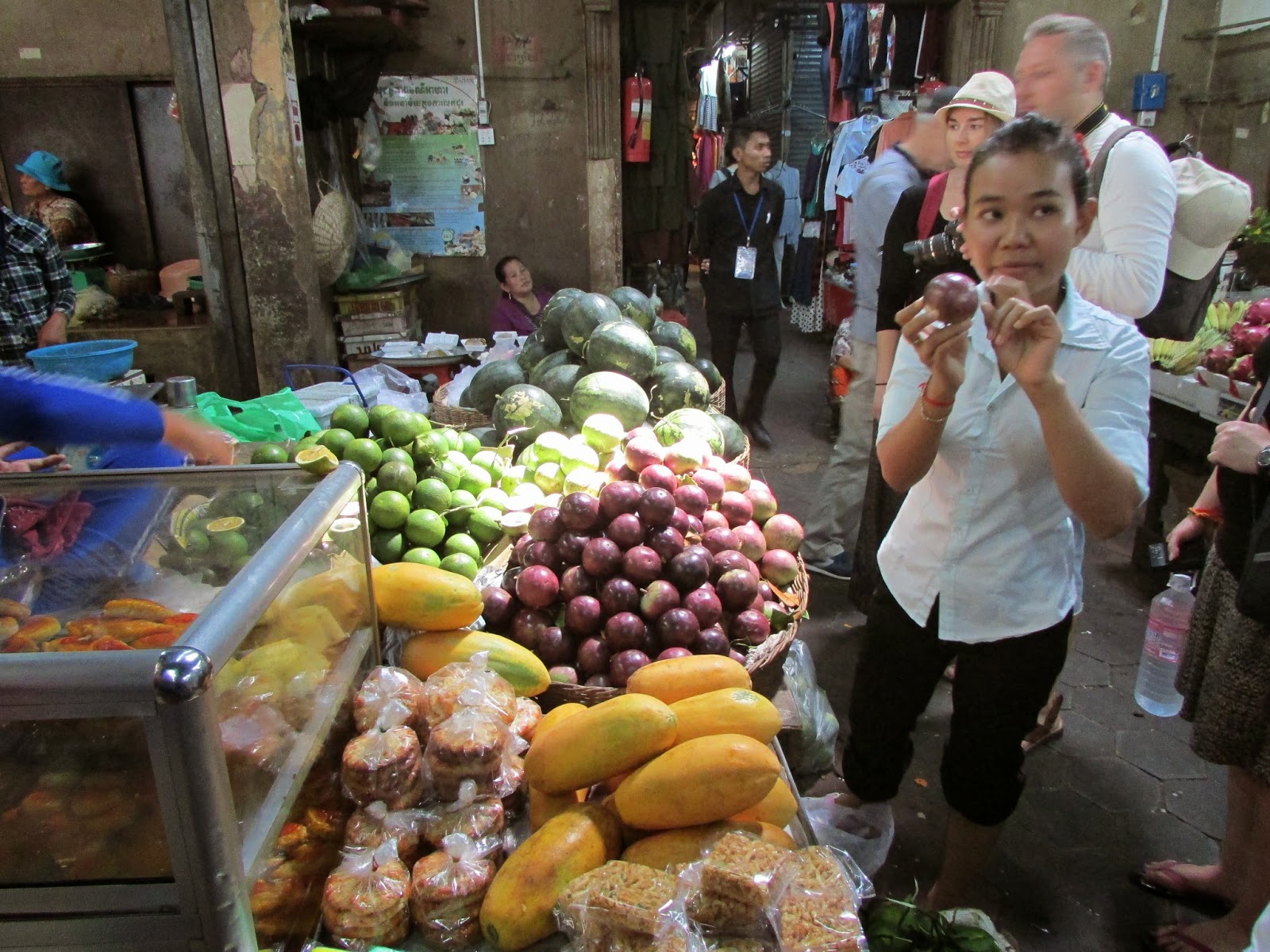 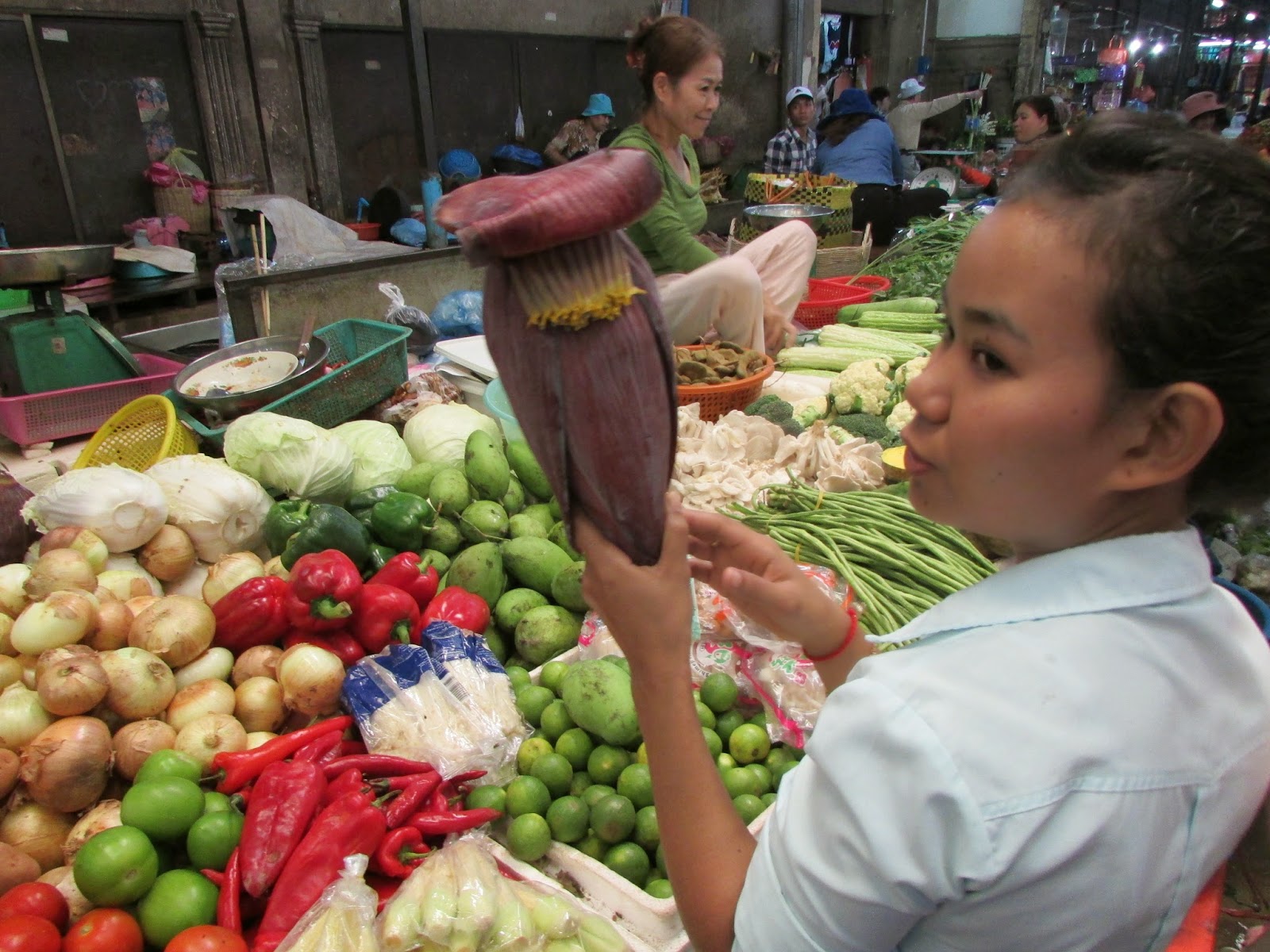 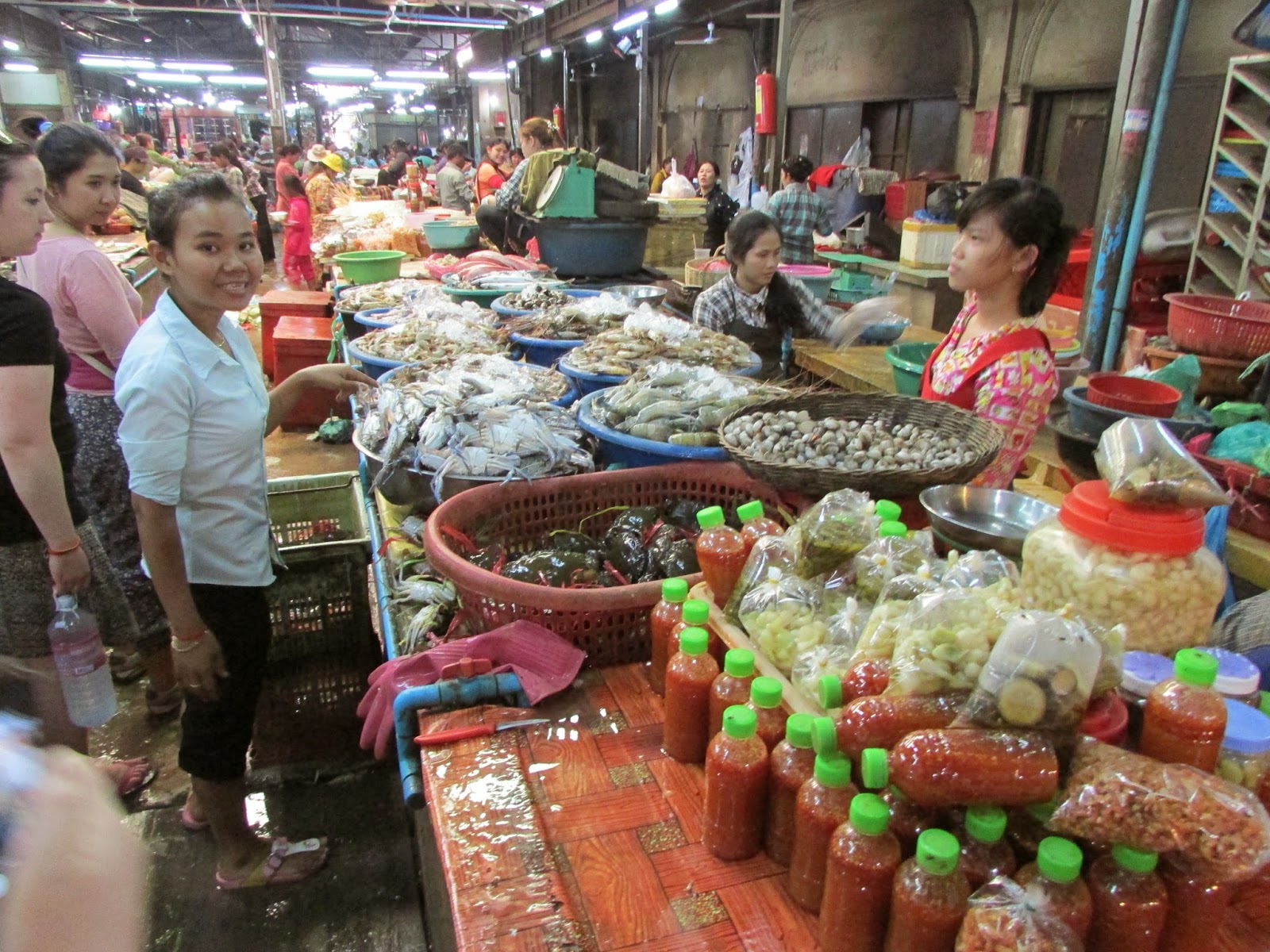 After picking up some of our ingredients (because the cooking school is also a restaurant, that allows them to provide you the list of choices they do...we didn't need to shop for all the ingredients on our market stop as most were already being used in the restaurant) we went upstairs to the well-stocked kitchen to begin. 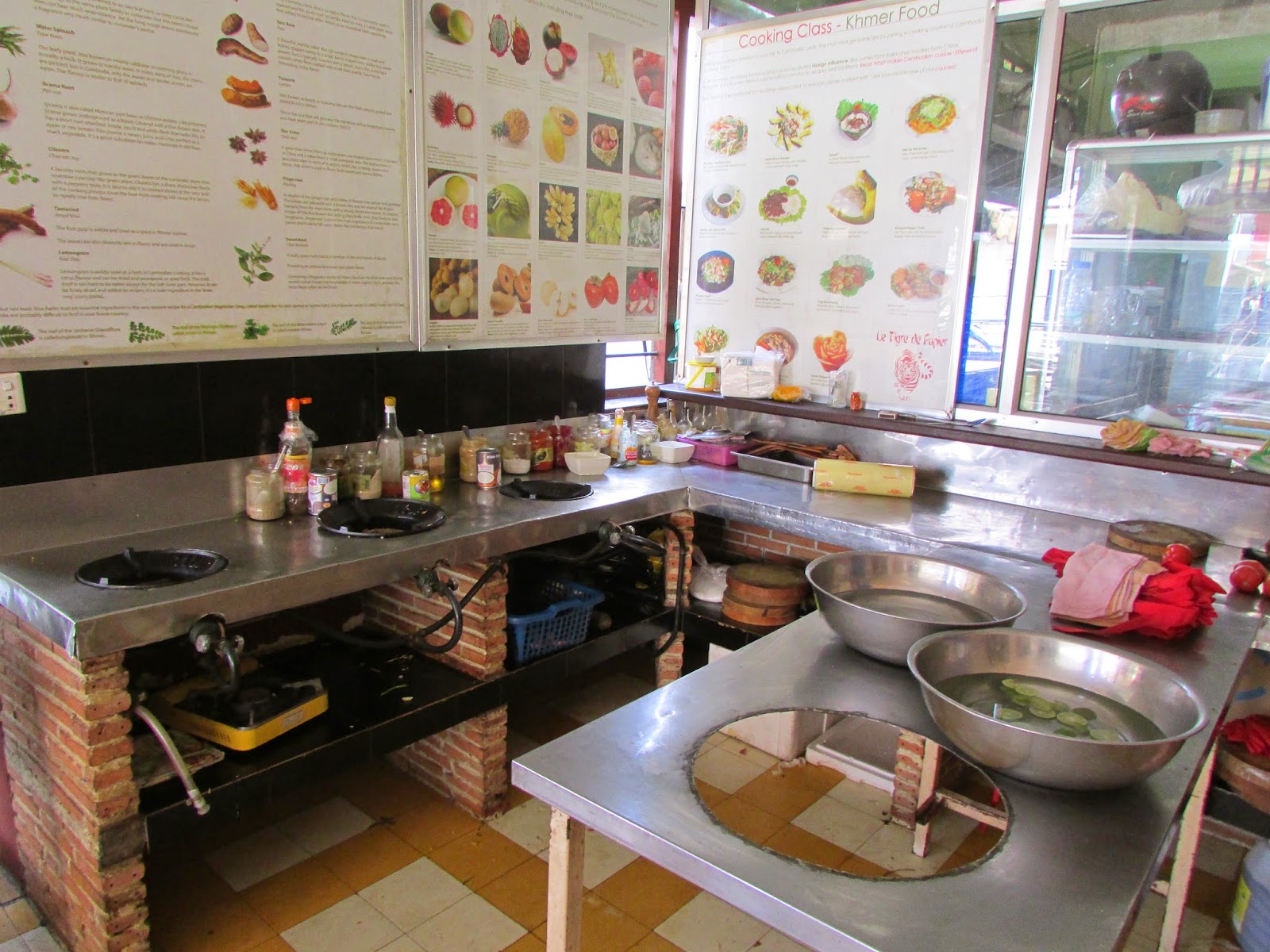 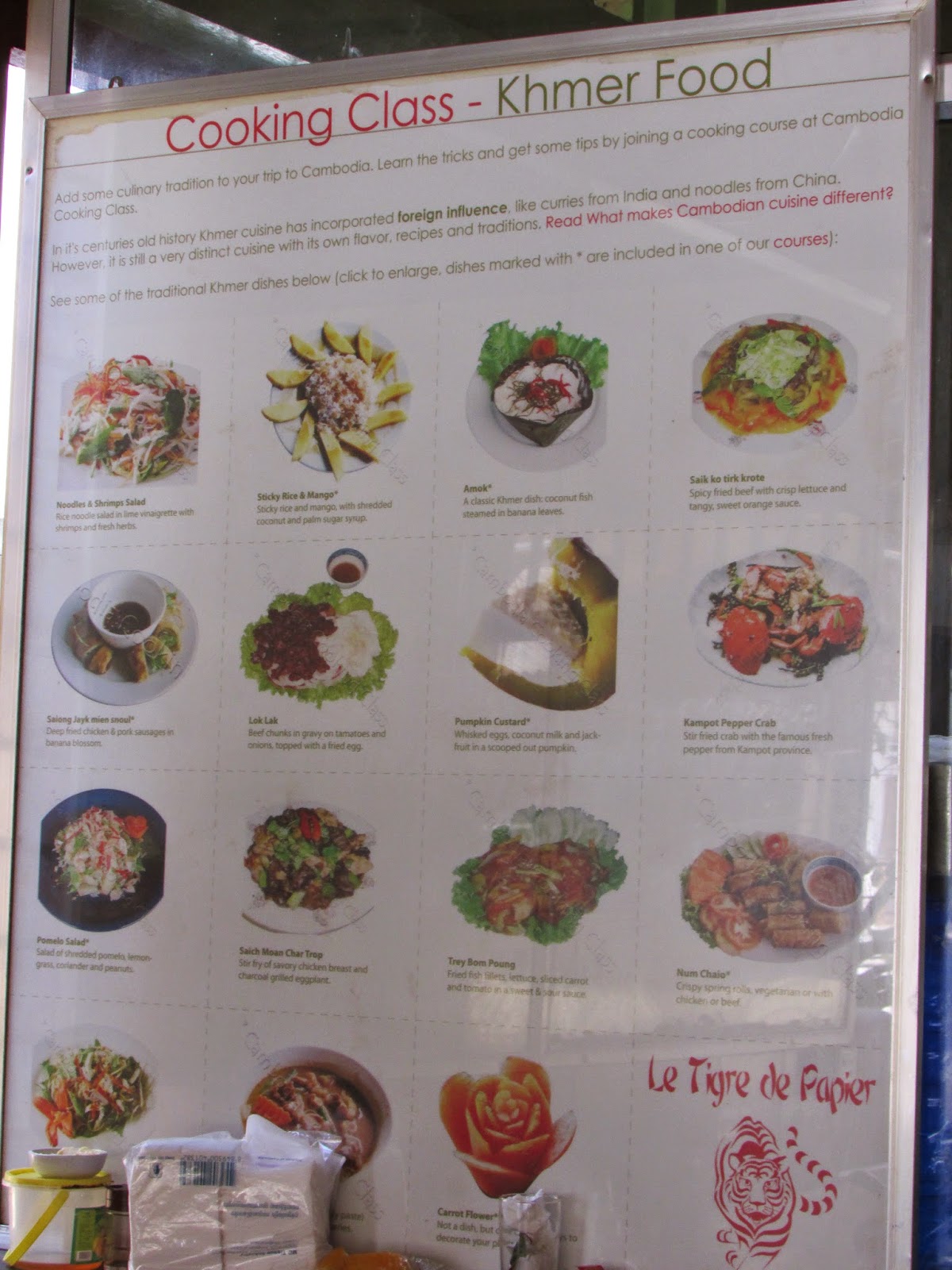 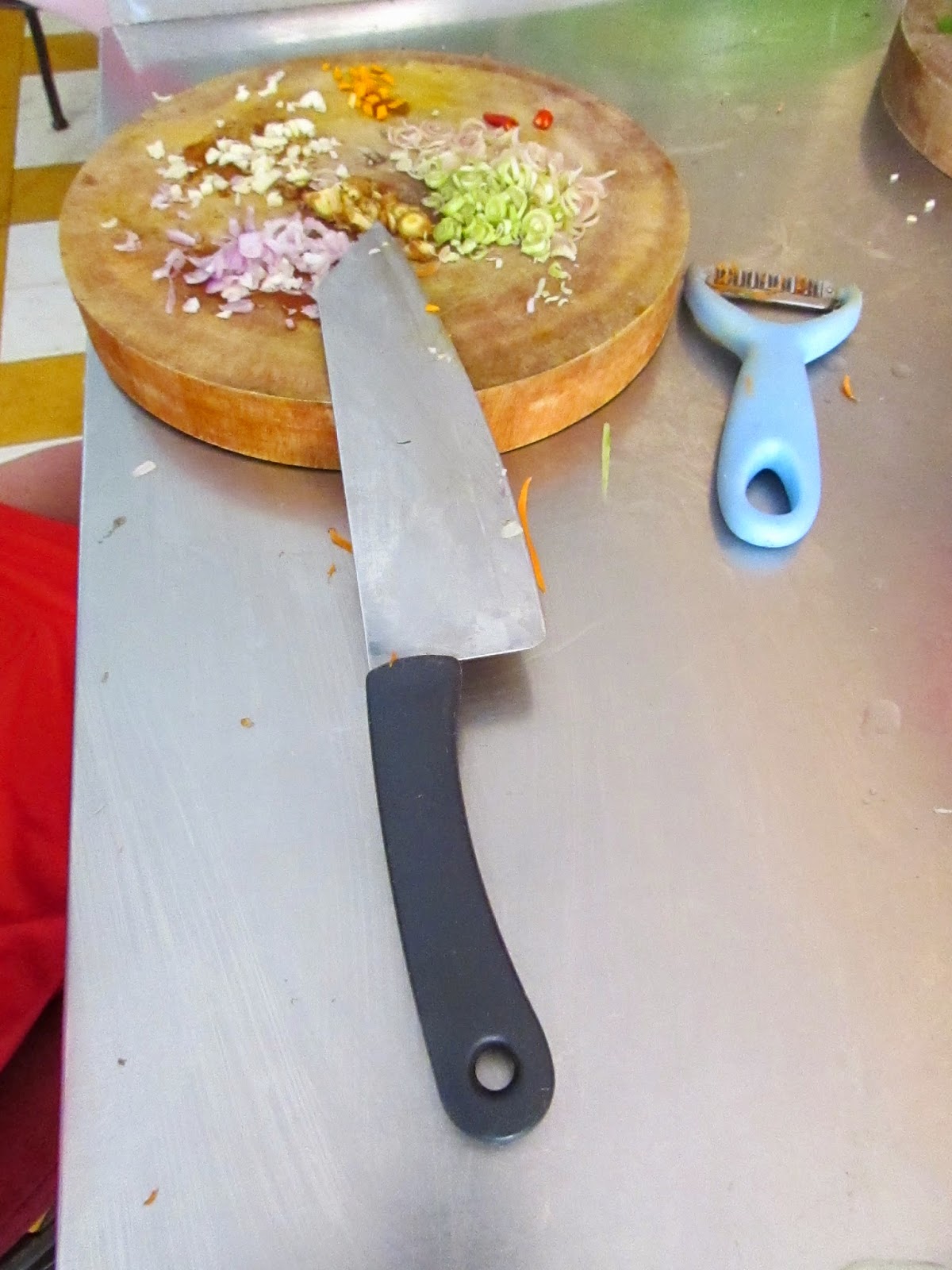 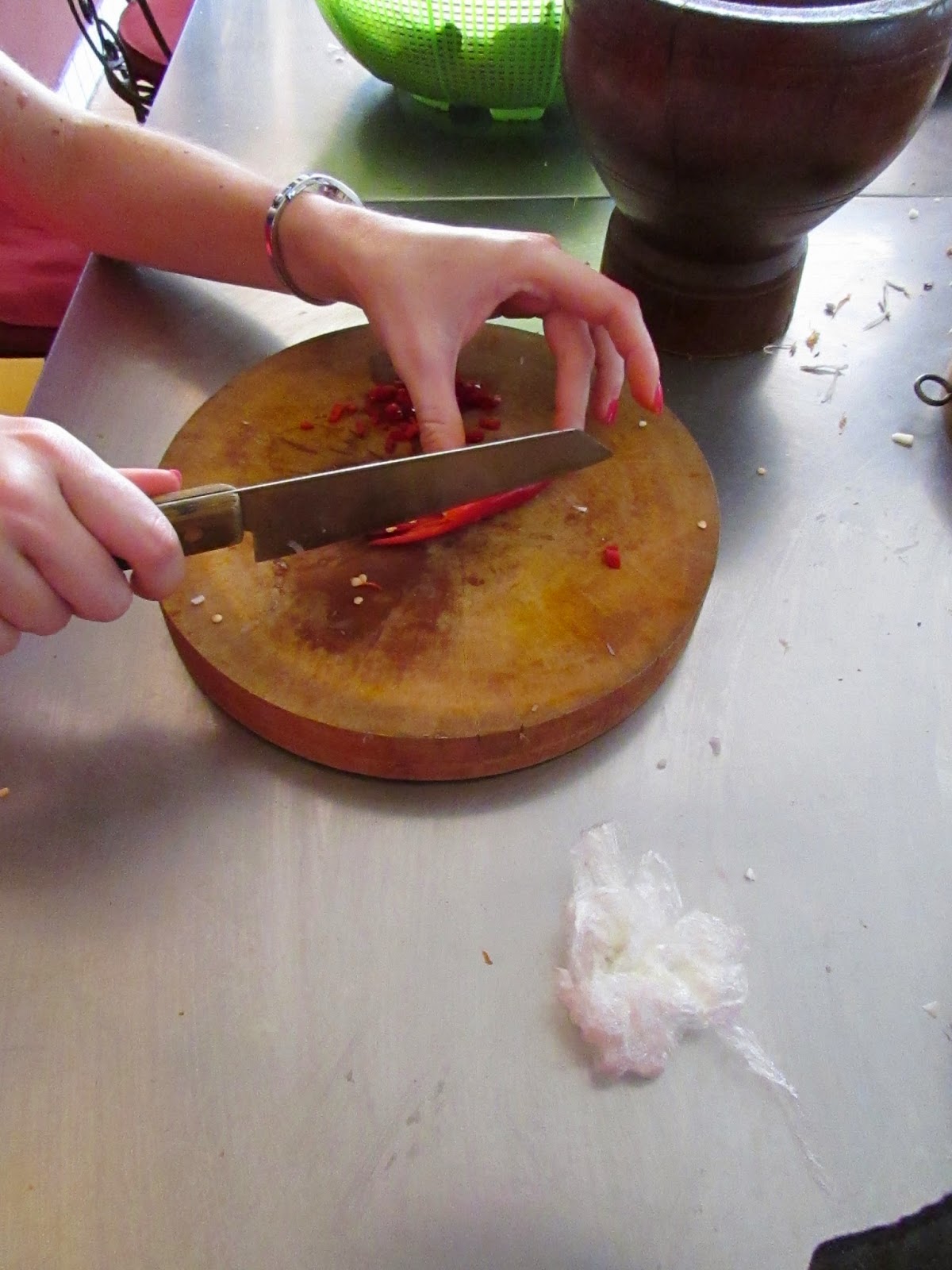 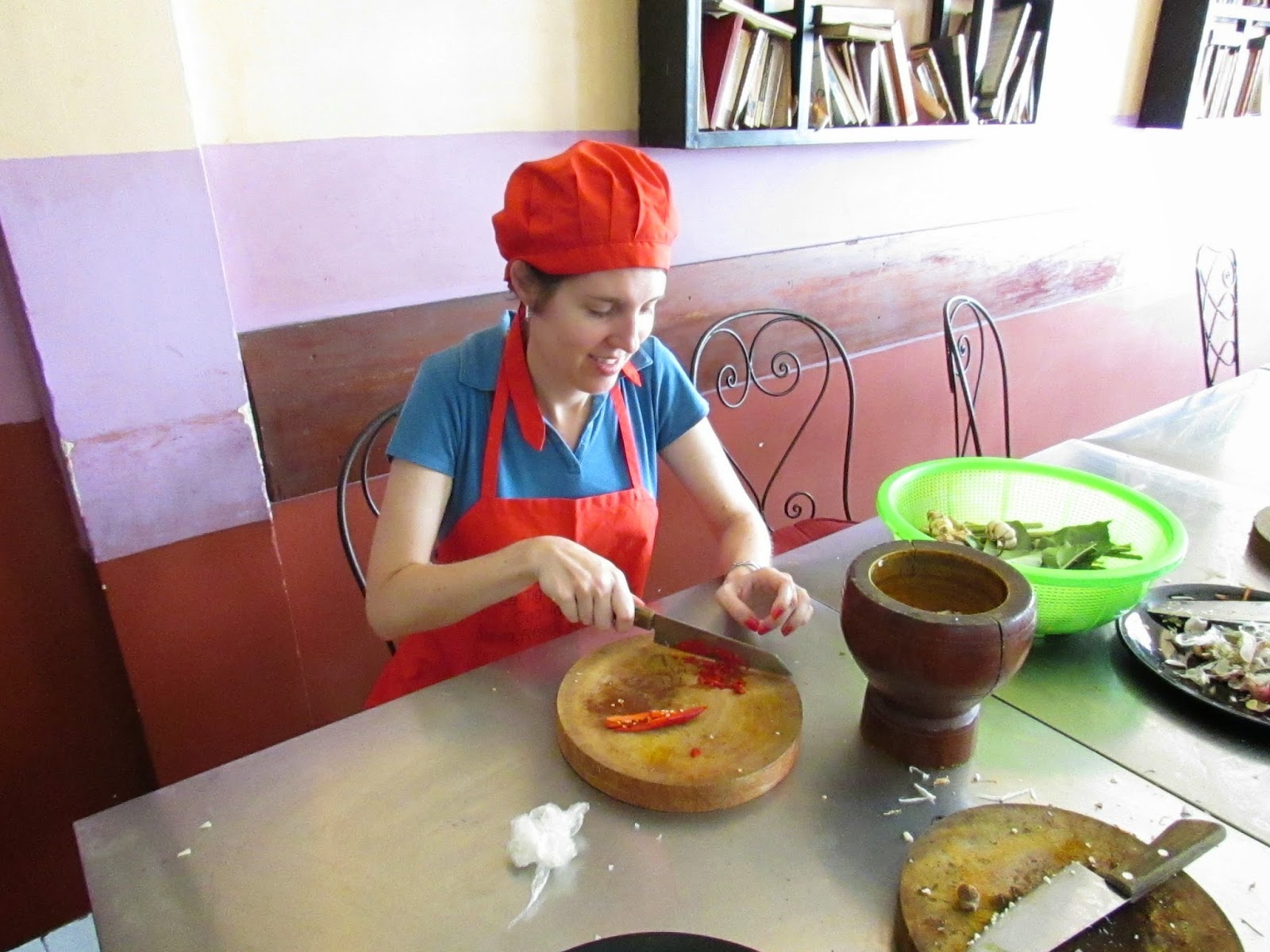 I chose to make some spring rolls for my appetizer and the famous Cambodian Amok for my main dish. Cambodian (Khmer) food shares many similarities with Thai or Vietnamese cuisine and makes use of a lot of fresh herbs. The curries tend to be a bit thinner and less strongly flavored and fish, rice and vegetables feature largely. Delicious kampot pepper is one of the more popular spices, but you also see a lot of tamarind, galangal, ginger, lemongrass, kaffir lime and tumeric used. The cuisines of nearby countries as well as India and France have a clear influence.

For the shrimp spring rolls, we learned how to cut/prep the ingredients, moisten the rice paper and carefully stuff the rolls. The meat (shrimp in my case, pork for B) was already prepared for us. Other class members made papaya or green mango salad (much like those you'd get in Thai cuisine, perhaps with a little less spice).

We choose a pumpkin custard for the class dessert and our teacher showed us the preparation. She had chosen a small pumpkin at the market, scooped out the center and prepared the custard mixture. It was then poured into the pumpkin, which was steamed. The main dish of Amok is pretty simple in preparation. Amok was traditionally a fish dish, but can be made with various proteins. I chose fish and B chose shrimp, while another classmate chose chicken.

We mixed the amok spices by hand (tumeric, garlic, red chili, galangal, lemongrass, shallot, kaffir lime leaf), a good workout for the arm with the old mortar and pestle. You can buy the prepared spice mixture at the local market, as we did in order to make this again at home without having to search for all the components. This spice is combined with palm sugar, coconut milk and some shrimp paste to cook up with onions, before adding the protein. 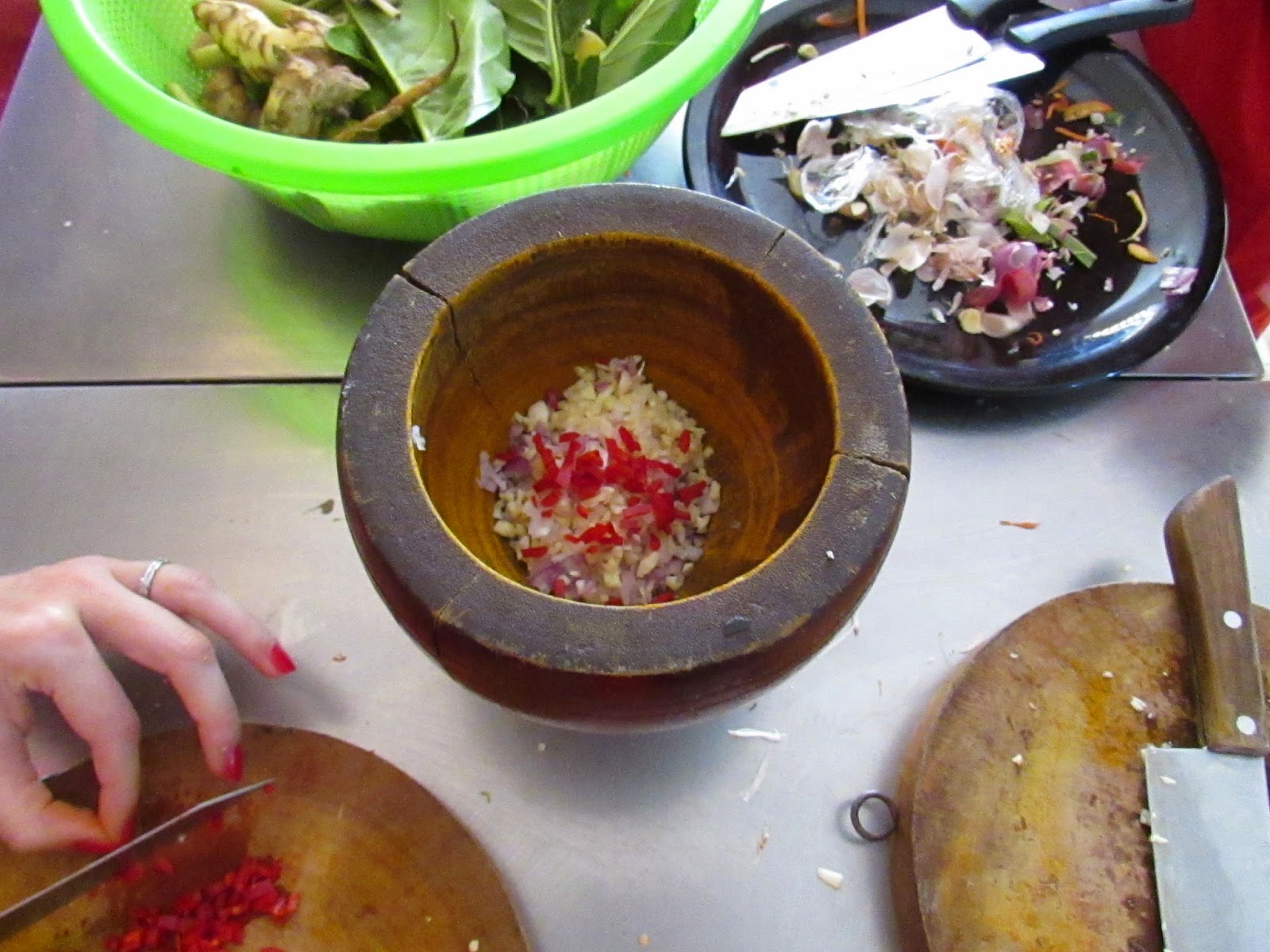