Ha Long Bay (literal translation in Vietnamese: descending dragon bay) is a Unesco World Heritage site and massively popular tourist destination. Some would say it is ruined because of this, and there is no doubt that the heavy boat traffic carrying tourists must be destroying the natural environment. However, it remains a beautiful site and the cruise can be a great part of a trip to Vietnam.

Our hotel arranged a cruise for us on the Paradise Luxury. Paradise is a large company with several ships of varying sizes and their own terminal area as well as a hotel at the port.

We were picked up (bright and too early!) from our hotel in Hanoi and taken via a small shuttle van to the port. It was comfortable, though the ride is a bit long and occasionally bumpy. The annoying part is the 45-minute stop along the way at a large shopping place (all the statues you could ever wish for!). It's necessary to have a bathroom break and you can grab a cup of coffee and stretch your legs, but I'd vote for 15 minutes extra sleep and a shorter stop. Fortunately, there was no pressure to buy, the coffee was tasty and the bathrooms were sparkling.

You arrive at port for a short wait in the lounge; the boarding process was truly efficient and the whole cruise is quite well-run. Being that you're on the ship less than 24 hours (for the one-night cruise), the time is maximized. Yet, I felt like it was still low-key and allowed us to relax. 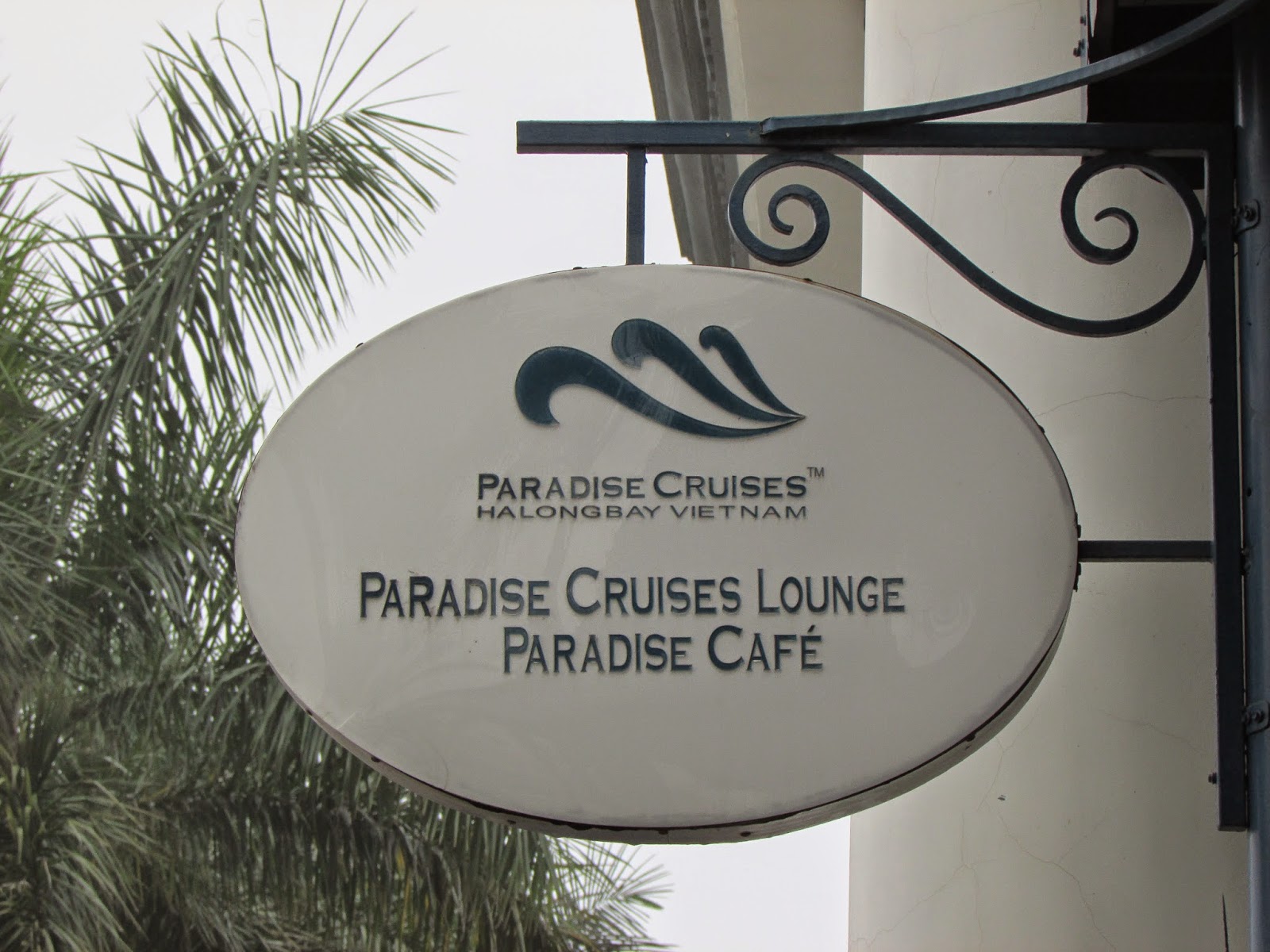 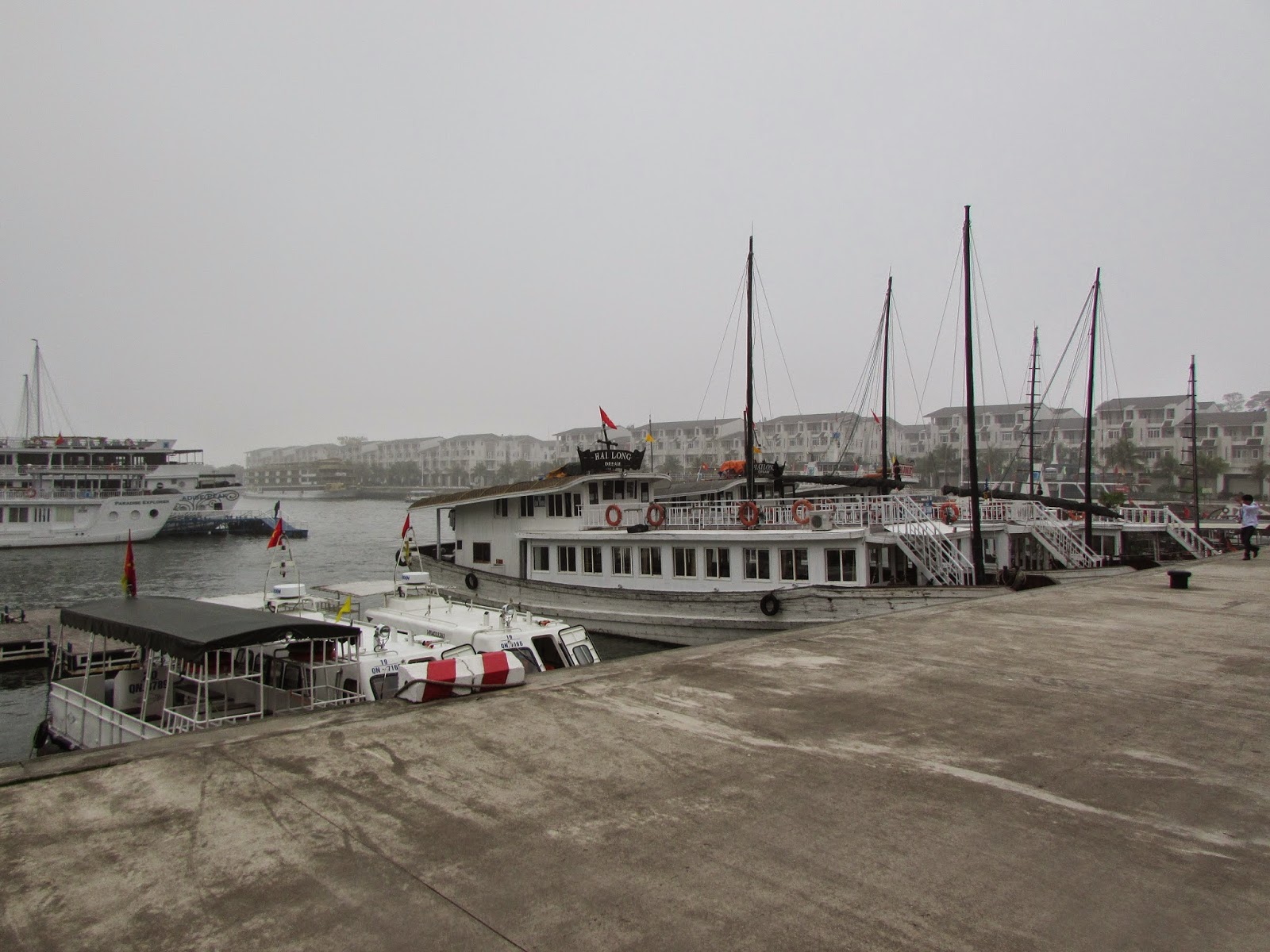 I loved our deluxe room, with extra sitting space, large windows and its own deck. The deck was accessible from public parts of the ship, but we quickly angled our chairs to discourage wandering passengers (we saw several of the large tour group members climbing up on our neighbor's balcony and peering in the doors). We also had a nice tub and you could open up a little portal window to take in the view while soaking. 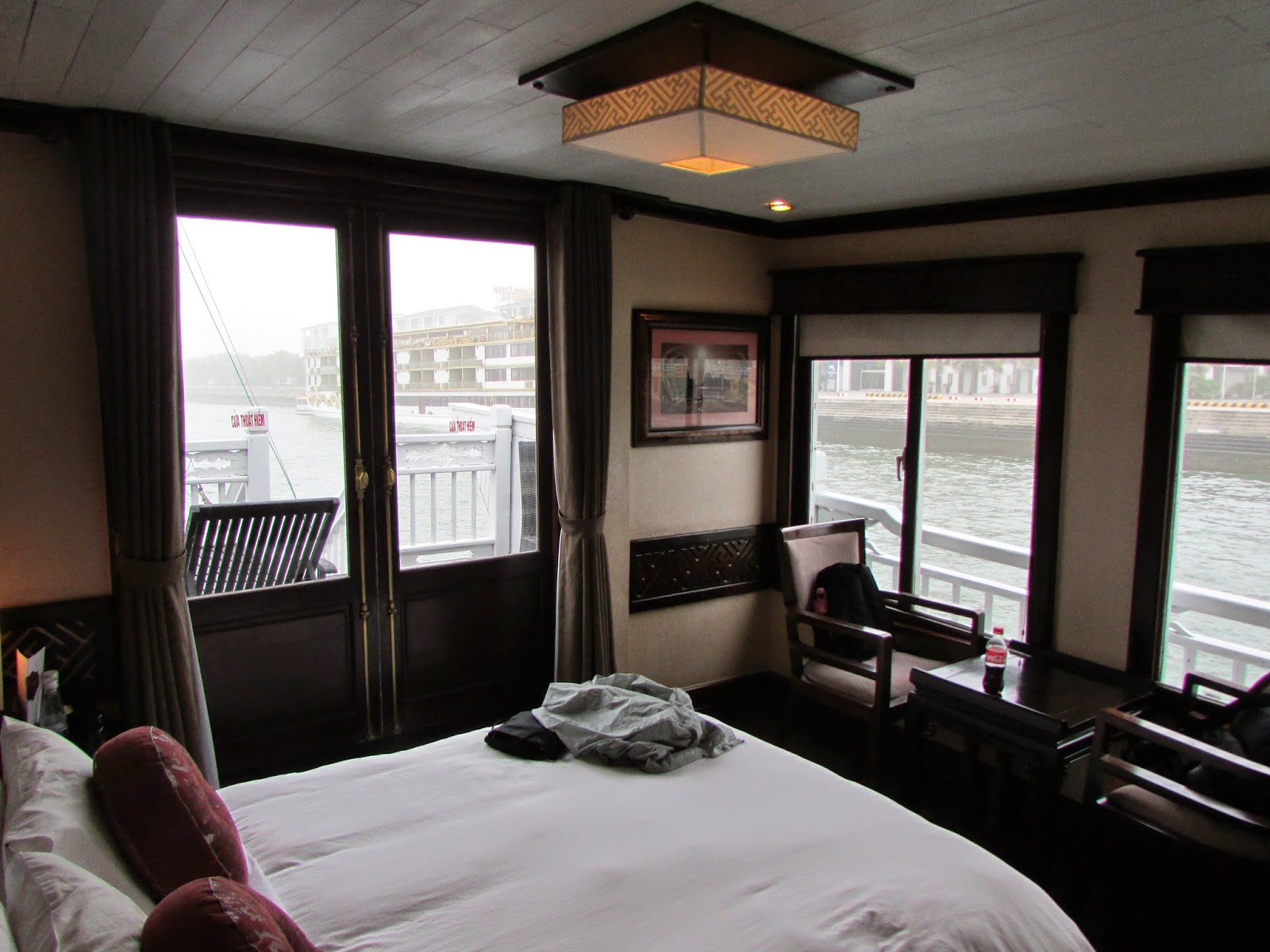 The cruise begins with a hearty lunch full of tasty Vietnamese specialties. Shortly following, is the first excursion opportunity to a cave. They give you fair warning of the 900+ steps, but it's a good way to work off that lunch. The cave had a very "Indiana Jones" feel (minus a lot of fellow tourists) and beautiful views of the cove below. 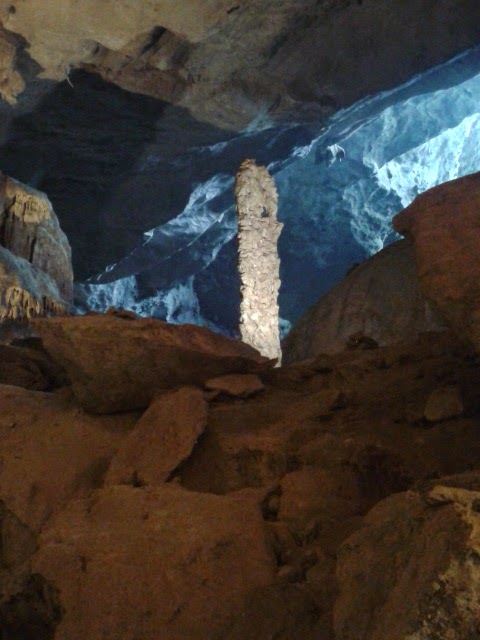 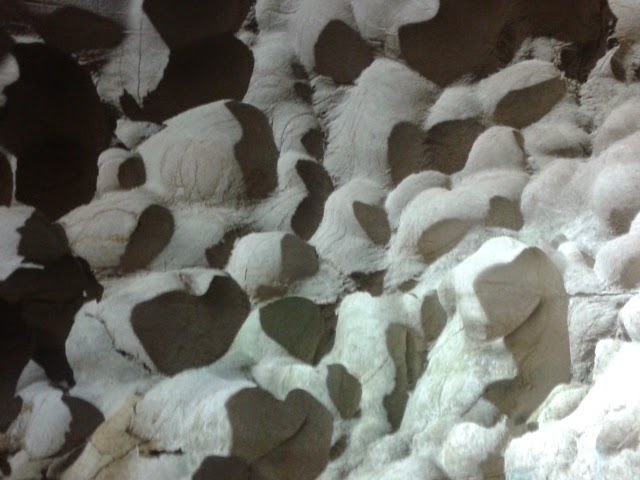 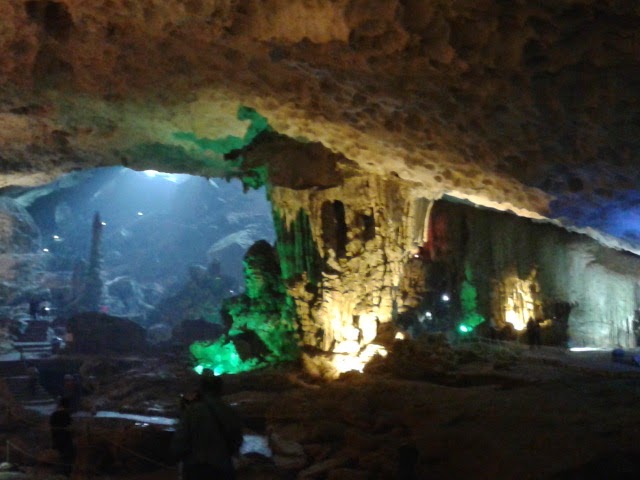 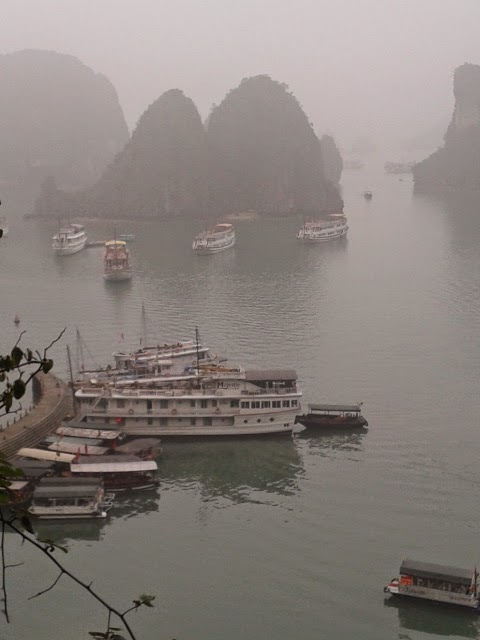 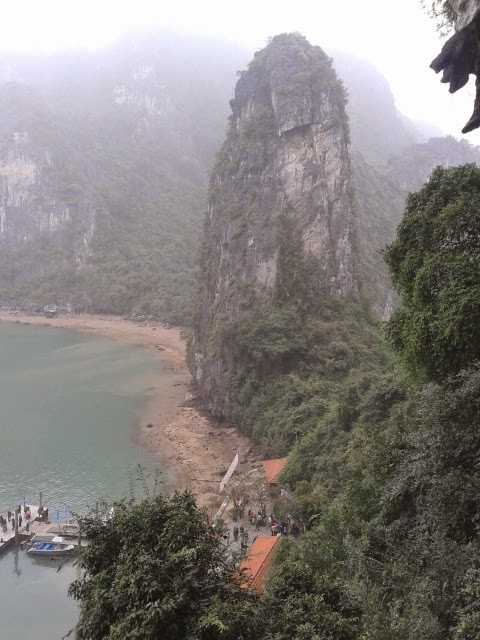 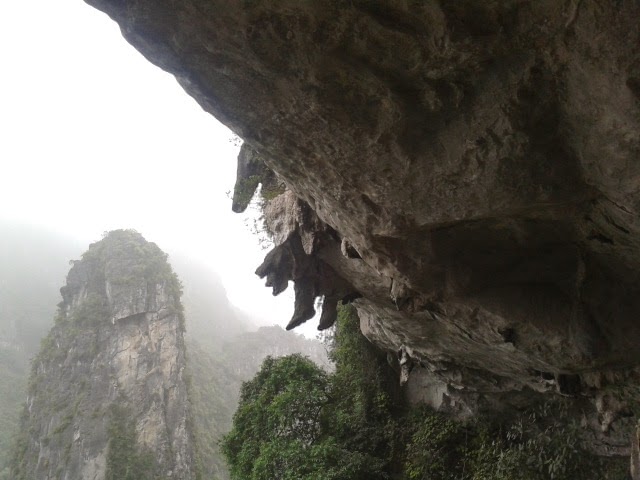 We skipped excursion #2, Titop Island, since the weather remained quite overcast (the most appealing activity there for me would have been climbing to the top for the view). You can also pay a little extra to kayak or simply relax on the beach there. We chose to relax with spa services instead and enjoy the views. 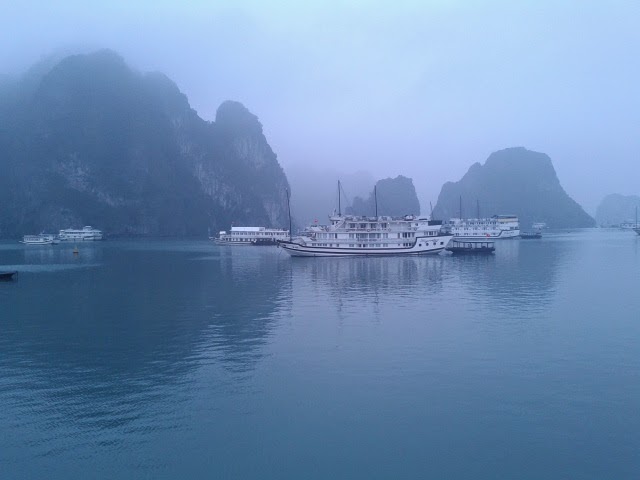 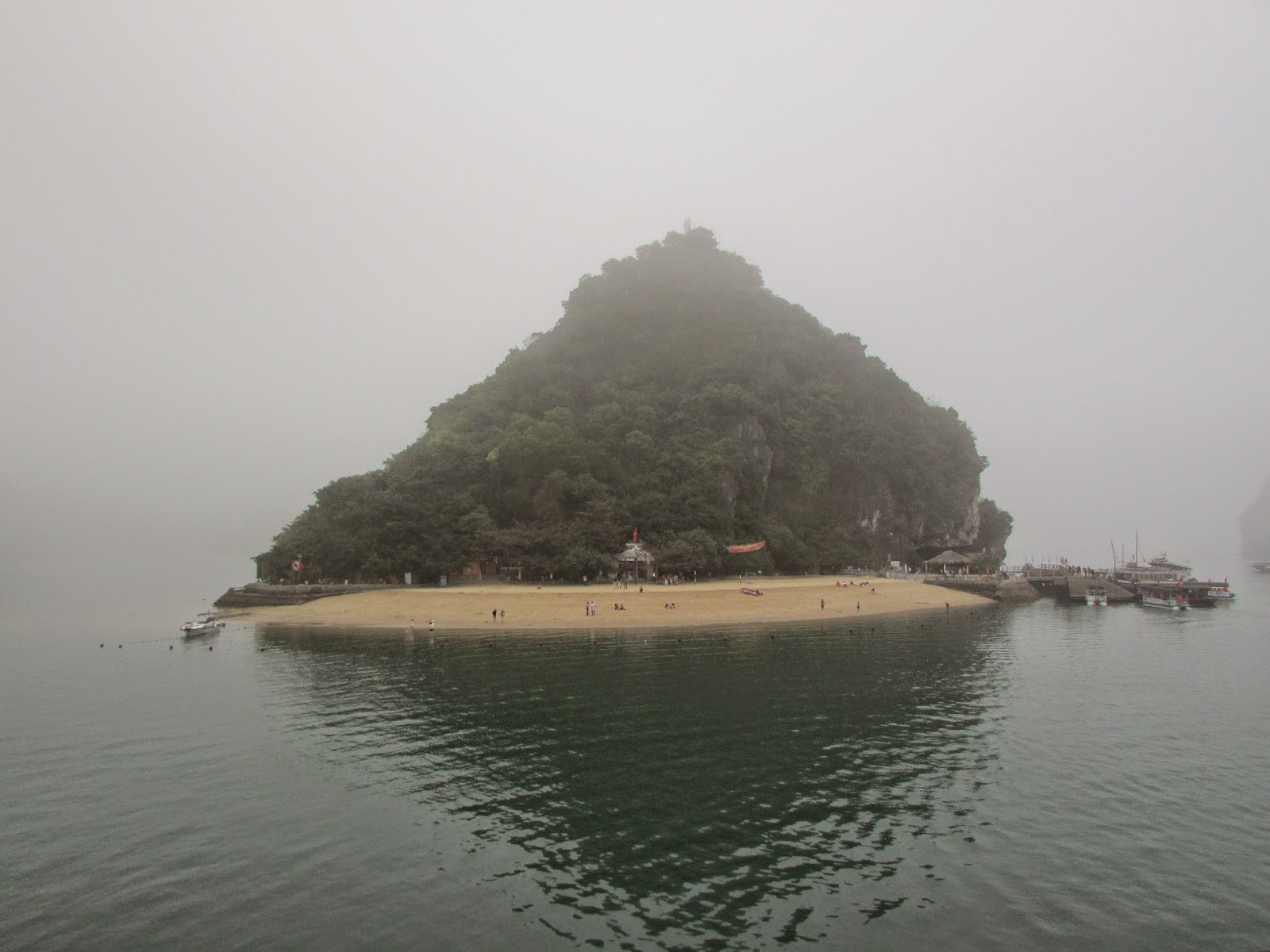 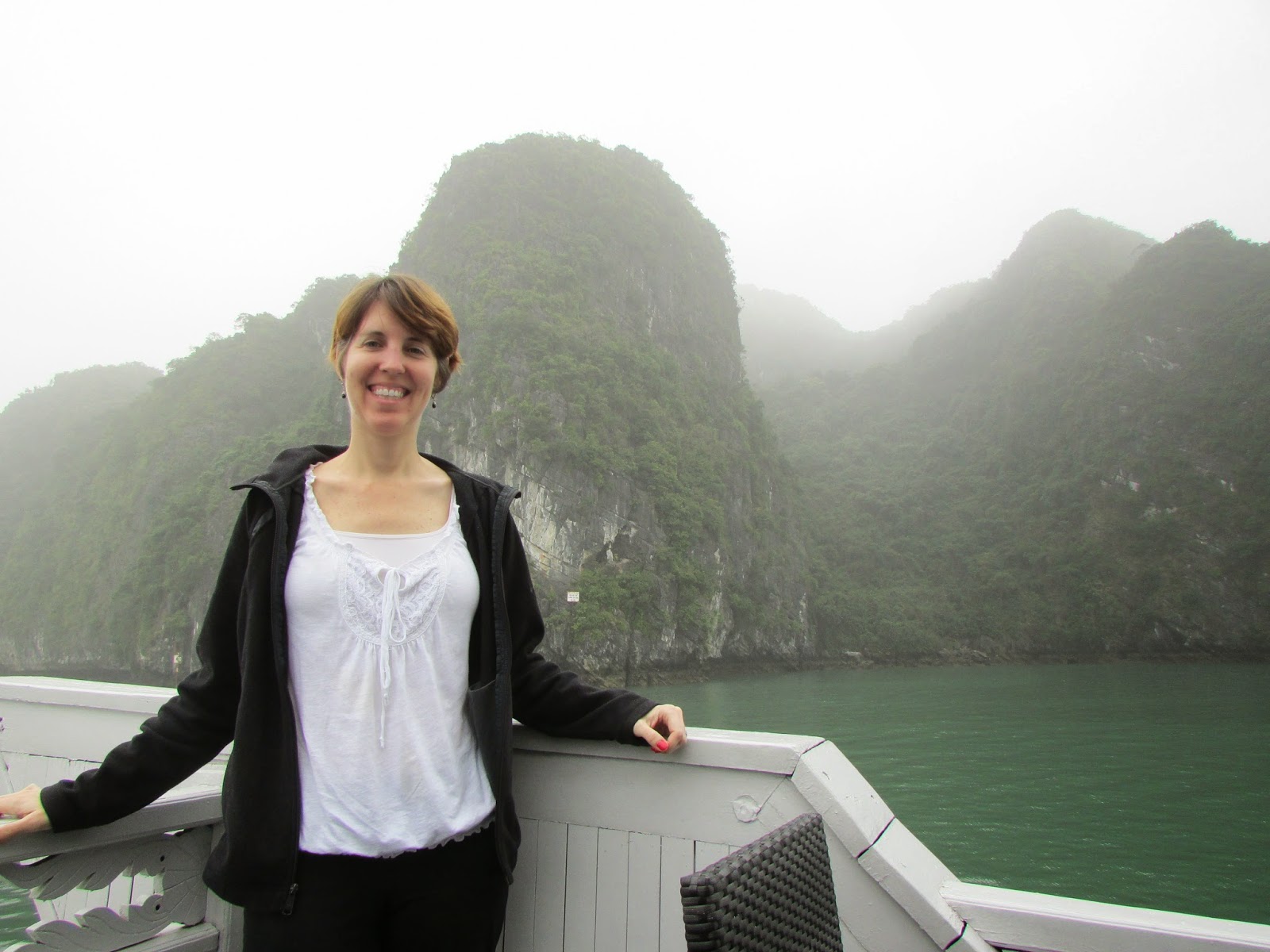 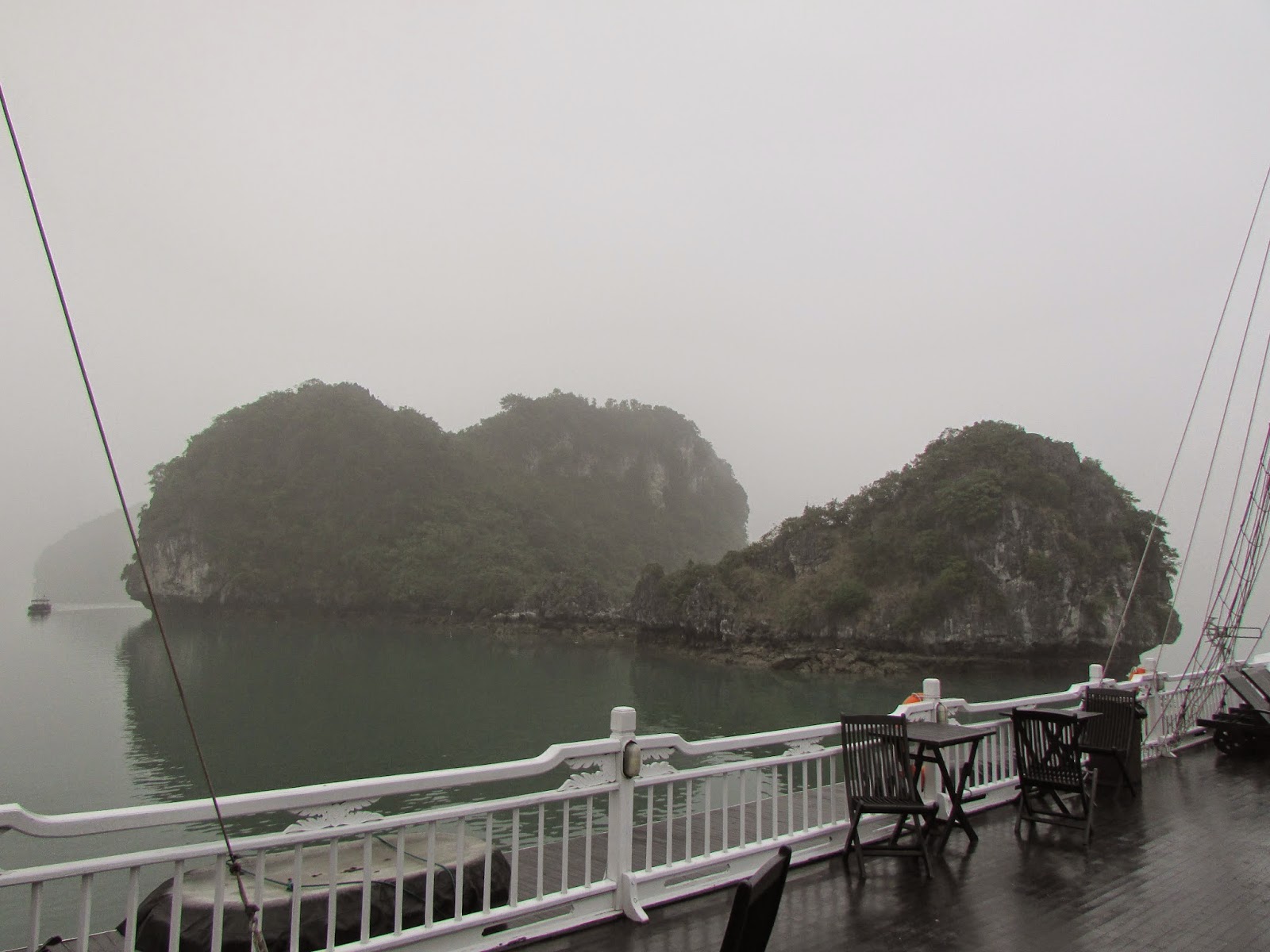 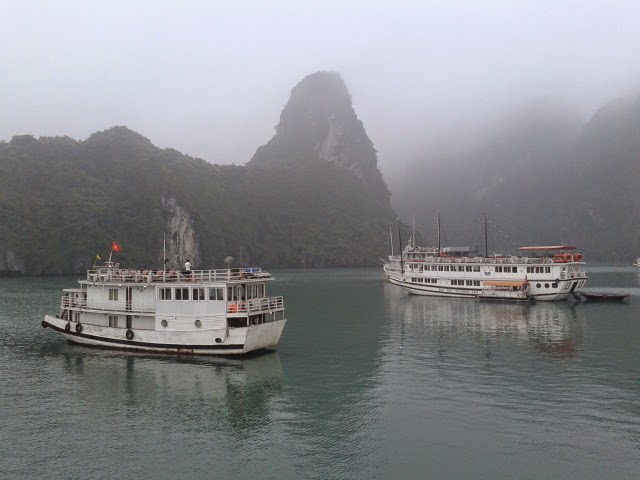 After some downtime, they start happy hour (drinks on board are extra, two-for-one during this period) which includes a cooking demo. I've made spring rolls before, so it was not especially enlightening, but it was fun to hang out with the group trying their hand at it while sipping a drink and enjoying the scenery. 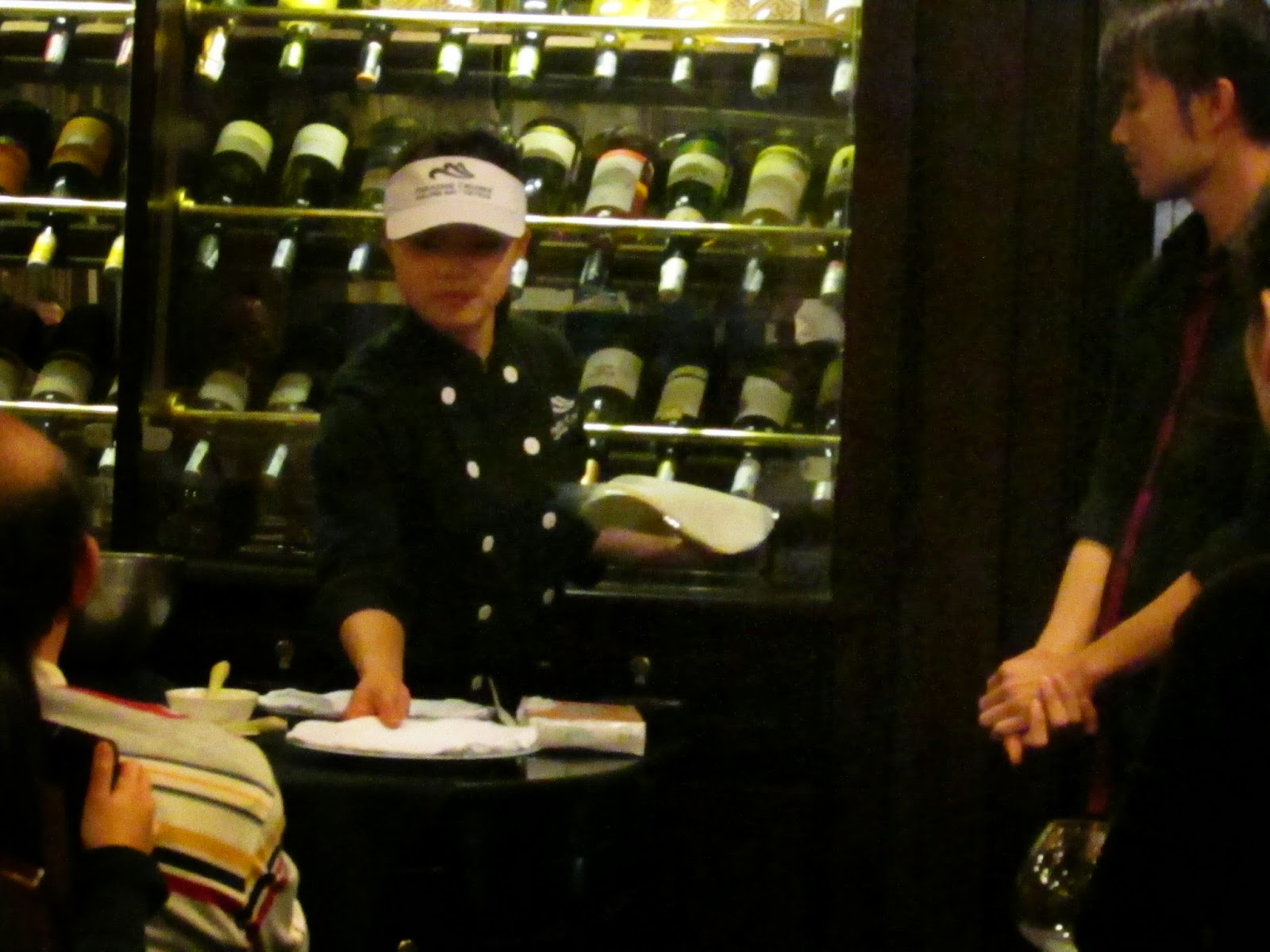 Later, we enjoyed a nice dinner (with a surprise "hongbao" for lunar new year...the red envelopes traditional here and in China given out with cash gifts...a nice touch). We chose to settle in for the movie after dinner, which was Indochina, an old but quite apt film to show on a trip to Vietnam. The younger guests tried their hands at squid fishing, while others retired to their rooms or had a massage.

The morning starts bright and early with tai chi on the top deck and coffee, before the morning excursion. I didn't make it for tai chi, but was really glad I got up for the excursion on the row boats (you could also kayak). Hang Luon cove was beautiful in the morning light and we were treated to quite a show by the monkeys, swinging down the rock face on the vines (unfortunately, my camera phone wasn't up to the task of capturing them). 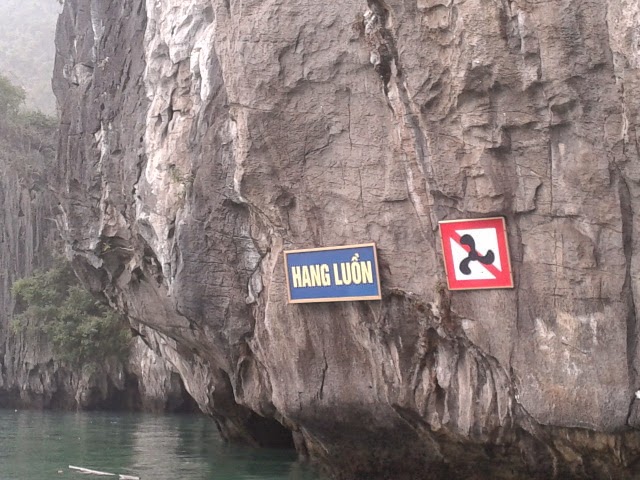 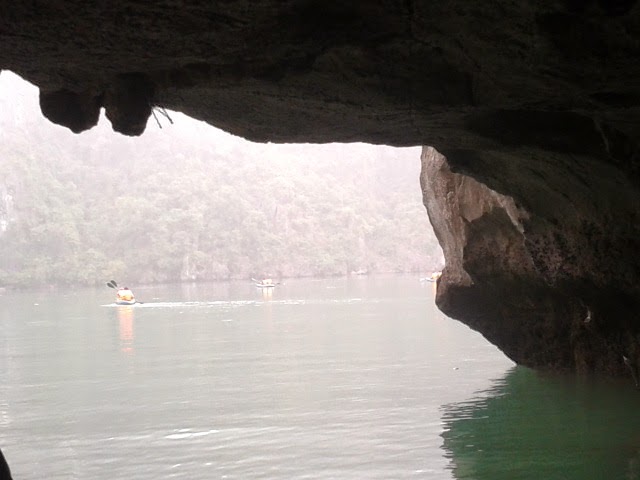 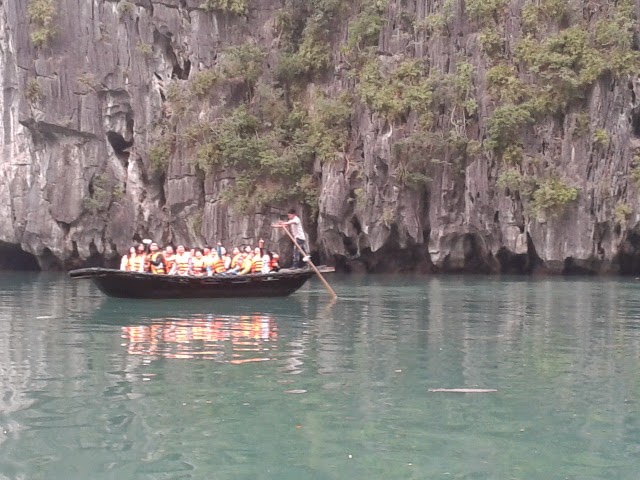 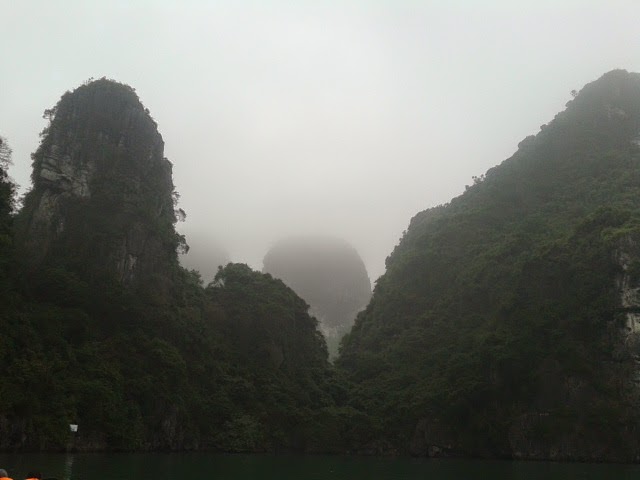 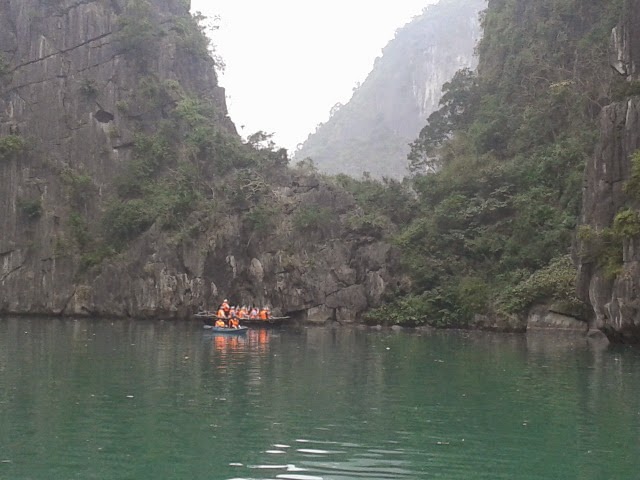 Lastly, it was back to the boat for breakfast and our final views before departing. 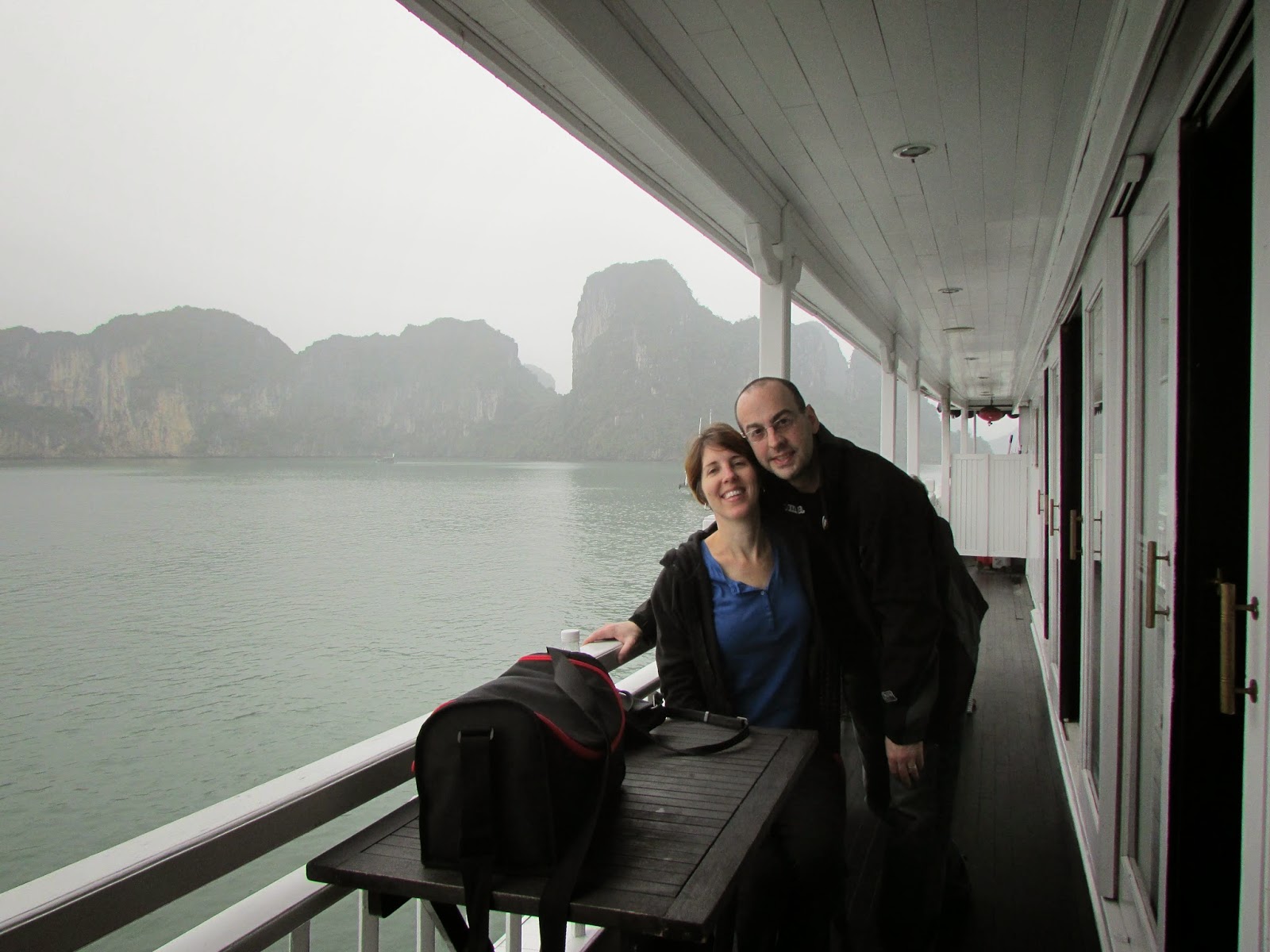 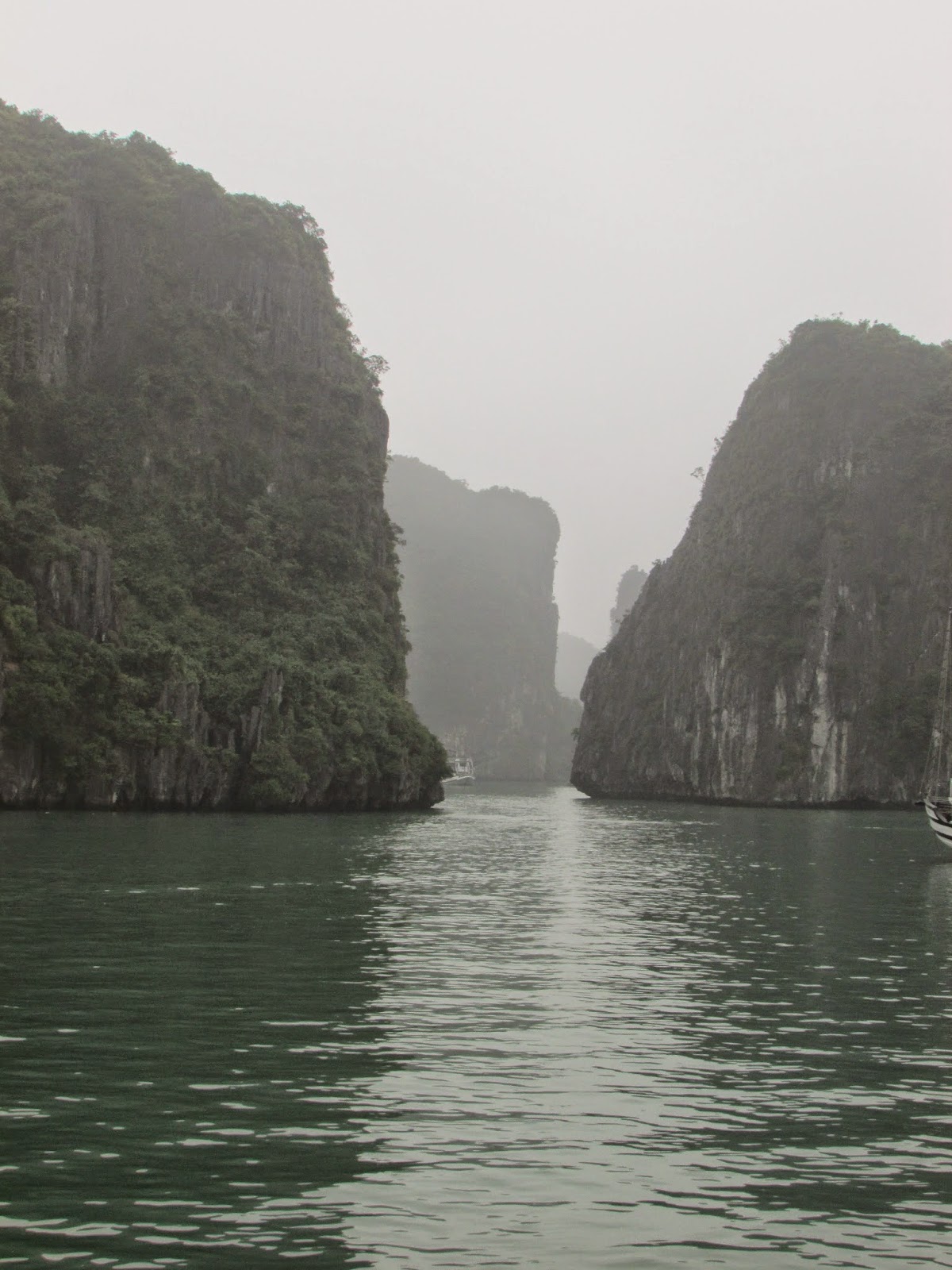 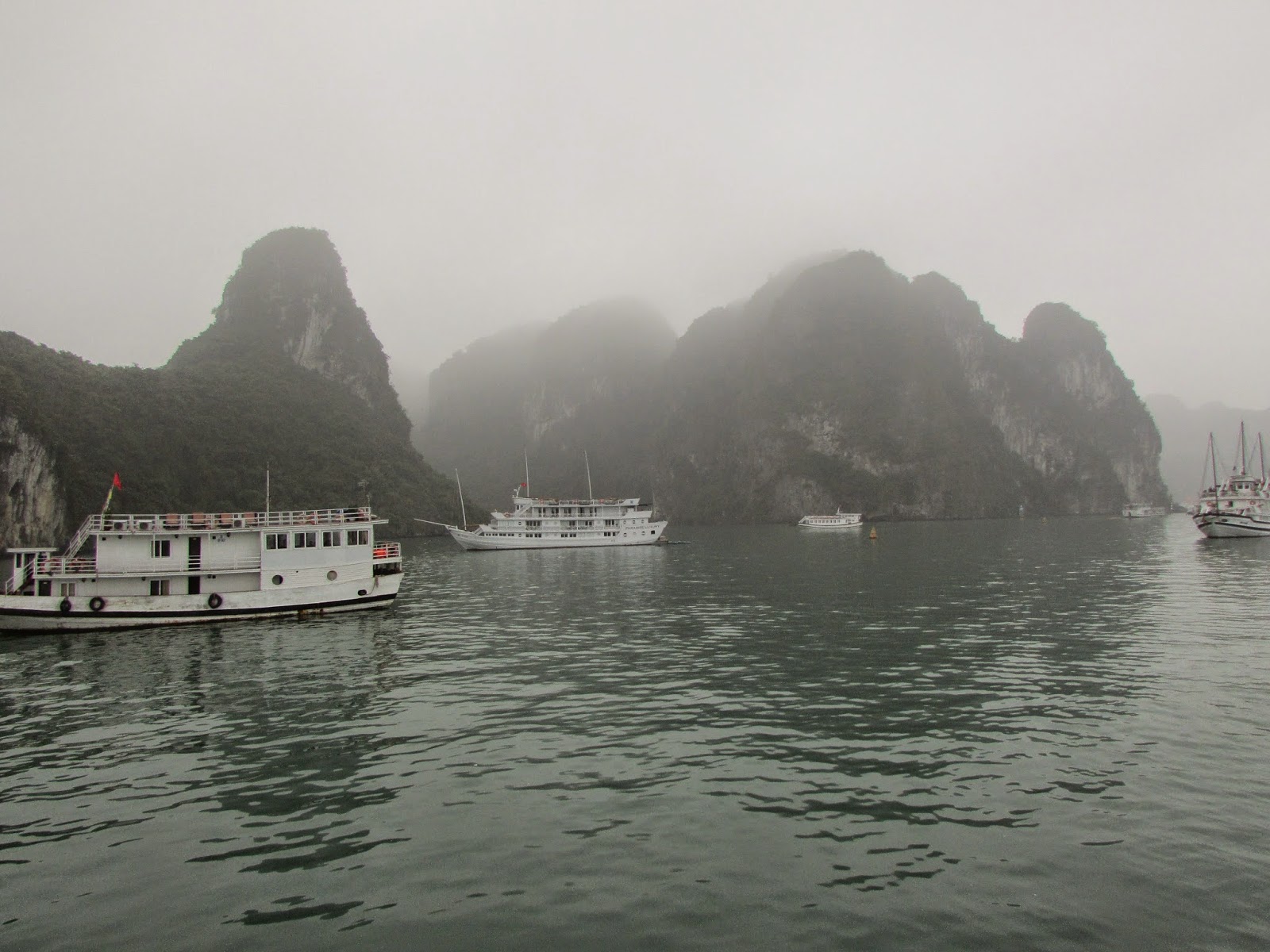