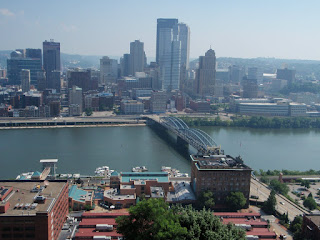 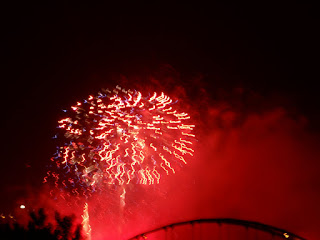 We started off on a bad note in Pittsburgh: our hotel room wasn't ready for check in at 4 PM. Two free drink coupons didn't really make up for it, but at least our wait wasn't long (beware the challenges of travelling on holiday weekends, especially when a big rivalry game is scheduled). And, can I just ask, where are the supposed cookies the Doubletree promises? I smelled them, but I guess they'd given them all away to Phillies fans.

I had long heard about The Church Brew Works so we sought it out. The Church is definitely worth checking out. It's a brewery and restaurant in an old Catholic church. Pretty amazing looking, and great food and beer. They have a nice lineup of styles of beer, including seasonals. And beer is considered holy water to some people...

We had heard "The Strip" was an area to check out...and our cabbie explained it was a straight shot down the road so we attempted to walk. I'd probably advise against it, though I'm a walker so it didn't bother me. Definitely wouldn't feel comfortable doing it by myself or in the dark--kind of sketchy and some fairly empty patches.

We happened upon a cool place called Kaya--Caribbean cuisine (looks like a great place for dinner) and enjoyed some nice drinks at the bar. They had some pretty creative cocktails. Finished hanging out on a porch overlooking the street at a sports bar--nothing special but nice to sit outside and some amusing people watching (the beginning of the rowdy, yelling behavior we saw time and time again in Pittsburgh). A group of women on the street below was thoroughly enjoying yelling obscenities up to a group at the bar--entertaining since we were safely removed from the action. Proceeded by Phillies fans partying (and singing) late in to the night (3 A.M.) in the hotel:-(

The Strip definitely didn't live up to the hype. The market there during the day is what's cool--visit that and don't expect a lot of nightlife. If we had known better, we'd probably have skipped it and gone to Southside, which we enjoyed a couple nights later.

Pittsburgh apparently is known for its fireworks shows and it was quite spectacular. With the river view, it's a great place for the 4th. Huge crowds gathered and we just found a spot to stand near the bridge to take them in. Be warned: huge crowds and you don't want to be driving through the traffic. It was again pretty rowdy on the downtown streets after--huge police presence and once again, experienced the yelling, angry crowd of women...

Our favorite spot for evening entertainment was Southside. For nightlife, it had the best variety. A favorite spot: The Library--a library themed restaurant and bar with menus presented in old books, with great food ("tapas style" but huge portions on their small plates). I had delicious (and huge) scallops and the Edgar Allen Sweet Poe-Tatoes:-) Also fun to check out: The Tiki Bar and Lava Lounge.

I'd recommend: The Church Brew Works Brewery, Kaya, Southside, the incline rides (but beware, no windows so it is very unpleasant during a heatwave), PNC Park, Andy Warhol Museum
Posted by Samie at 3:01 PM