We had heard good things about Valencia from the locals in Dénia and seen parts of the city before, but only en route to the Valencia airport and bus terminal. On a recent trip to Valencia we found the city to be very much better than had been described. 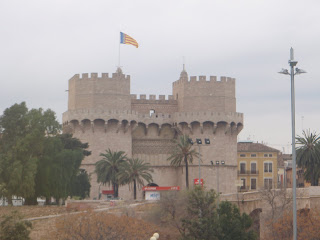 The city is probably best known for it's oranges and being the home of paella, but that only scratches the surface. Valencia is the 3rd largest city in Spain (Madrid, Barcelona) and is a great mix of old and new. We were there the weekend prior to Fallas (fie-yas) and were able to see some of the festivities leading up to the event. (Stay tuned for a dedicated post on Fallas coming soon).

The old town is reminiscent of the old towns of Granada and Seville, but with a somewhat Parisian feel. Quaint cafes outline the squares. There is a large shopping district and endless bars and restaurants that serve jamon, tapas and paella, as well as street vendors selling churos and chocolate. The old town is situated between the beautiful train station (next to the bull ring) and the ¨river¨.

Valencia´s river was diverted many years ago due to flooding and the area that was the river is now flowing as a park system that runs through the city. There are gardens, concert and sporting venues, trails, etc. On the other side of the river is the new city, with the business district, new fútbol arena, zoo and ¨the city of arts and sciences¨.

The city of arts and sciences is an area of Valencia that is home to the largest aquarium in Europe, state of the art symphony hall and many museums. It was designed by architect Santiago Calatrva and is ¨jewel¨of Valencia. The zoo is better described as a wildlife preserve and focuses mainly on African species.

The city has a very nice hop-on/hop-off bus tour with 2 different routes. The red route focuses on the old city, while the blue is dedicated to the new city. You can get a ticket good for both lines for 24 or 48 hours and this is an excellent way to see the city, get transportation to the highlights and learn some Valencian history along the way. The blue route also covers the beach, the marina and the port. Valencia's port and water front is very nice and was host to the last 2 America's cup yacht races.

Valencia is also a major transportation hub for Spain. There is high speed (AVE) train service to Madrid (in 3 hours at over 230MPH). Barcelona is also only 3 hours away by train... it's not high speed yet, but won't be long and it is a beautiful journey along the coast. By bus, you can get to many of the other beach towns of the Valencian Province in just a couple hours. Valencia also has a very nice airport host to many low-cost European carriers.

While Valencia may not be my favorite Spanish city (jury is still out on that one) it is on the short list and not to be missed. In fact, for a week or two in Spain, my suggestion on a "home base" is Valencia. Very family friendly and safe... it has everything and an easy way to get anywhere... oh, and the paella is out of this world!
Posted by Bryan at 8:18 PM