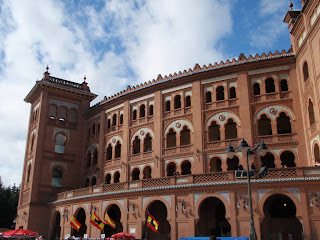 Bull Fighting dates back to 711AD and like it or not, is the National Sport of Spain. It is also seen in parts of France, Portugal, Mexico and Central/South America. In Spain, there are hundreds of cities that stage Bull Fighting and most are in the Andalucia region. We've seen the 'Plaza de Toros' (Bull Ring) in Seville, Valencia and Granada. However, according to the locals the place to see a Bull Fight (outside of Andalucia) is in Madrid. The Bull Fighting season runs from March to October and similar to other sports, starts with a 'pre-season'.

Our recent trip to Madrid (accompanied by good friends from the US) enabled us to catch one of the final pre-season matches for 2011. Pre-season is really no different from other Bull Fights except the Matadors are young novices trying to gain popularity in the sport.

I was recently asked, "so they kill the bull, right?" Yes, and 5 to 7 more. Each "match" lasts around 15-20 minutes from the time the bull enters the ring, until they drag its dead body out. I call it a "match" but in reality the bull doesn't really stand a chance. Although we did see one pass where the bull got hold of the Matador, flipped him airborne and came close to trampling him. The other Matadors, assistants and men on horses quickly came to his rescue and distracted the bull. It happens but is rare. In that match, score one for the bull.

When we were in Seville we toured the Bull Fighting museum. Our guide told us how many years ago, in the 1950's I think, one of Spain's most celebrated Matadors was killed in a match. She then pointed to this killer bull's head mounted on the wall, next to its mother. After they put the killer bull down, they killed its mother so that she would never produce another killer bull.

Bull Fighting is not pretty, but does have a beautiful artistry and ceremony to it. It is bloody, cruel and has to be seen to really be understood. I am not advocating the sport or recommending everyone sees a Bull Fight, but when in Rome... or in this case Spain. It is truly unique and very, very Spanish.

The next part of this post describes a match... and in some detail, so be warned.

A match starts by several Matador's assistants (Picadors) and Horsemen (Rejoneadores) teasing and angering the bull. This is in an attempt to gauge the bull's behavior and reactions. After about 5 minutes of this, the Horsemen stabs the bull in the shoulder once to twice to start the bleeding. The Matador's assistants have the bull take several passes at them while they attempt to drive Banderillas (long decorative spikes) into the bull's back. Once the bull is further weakened and made more bloody by the Banderillas, the Matador throws his hat into the ring and comes out to finish off the bull.

The Matador and bull perform a sort-of dance to the death as the bull makes many charging passes. The Matador is judged by his skill and artistry at getting the bull to charge and successfully avoiding getting gored in the process. After the bull has made many passes and the Matador is ready, he is presented with his killing sword, or Espada. This time it's the Matador that charges at the bull and attempts to drive the Espada into the bull's heart. If he misses, he is booed by the crowd and tries again until he succeeds. The bull will then fall to the ground and will finally be put out of it's misery as the Matador drives a Puntilla (small dagger) into the base of bull's skull severing it's spinal cord. Lastly, the dead bull is attached to horses and dragged out of the ring. Within minutes, a new match starts. Most Bull Fights consist of 6 or 8 matches.

People say, you either love bull fighting or hate it. I'm not sure how I feel about it. I imagine in the dead of summer, with seats in the shade among a packed arena of fans and more experienced Matadors is a better way to see a Bull Fight. I would like to experience that, perhaps with a local fan who can better explain the history, culture and sport. I'm not sure my sensibilities would allow me to become an ardent supporter, but I think to travel is to explore, be open and learn more before judging via those sensibilities.
Posted by Bryan at 8:28 AM