One of the great things about a city with the size and sophistication of Shanghai is the variety of options--for food, nightlife, shopping, etc.  Being transplant Americans whose hearts reside squarely in the Mediterranean, we immediately got excited when we saw the number of Spanish (and Italian, Greek or more general Mediterranean combos) restaurants here. 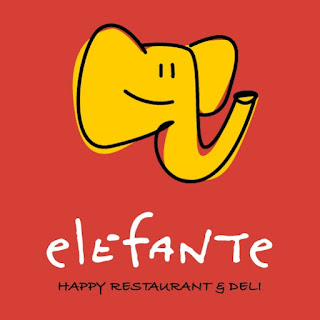 The newer brother to the famous El Willy, this restaurant resides in the old El Willy space left behind when it moved up in life to the new Bund location.  We loved its tranquil setting in the Former French Concession with a lovely garden.  On our first trip we had a variety of tapas.  The 5J Iberico jamon did not disappoint, an expensive treat even in Spain but here you really need to love it to pay these prices (and someone nicknamed Ham Tooth in our family does!).  We had delicious crab croquettes and I chowed down on a great crab salad also.  We visited another time to just sit at the bar and munch on the ham and cheese plates.  A little trip down memory lane!

We had to make plans to return for paella when we discovered Elefante is open for lunch.  We had thought about going to El Willy, but they are only open on Saturdays for their set brunch.  The garden at Elefante is really the perfect place for a paella Sunday anyway!  (Of course, we didn't make reservations so we sat at the window looking out at the garden--close enough for now.)  We are admittedly paella snobs.  How could we not be?  We spent almost a year in the Valencia province and put a good deal of research time in to paella.  We spent most Sundays taking in a long, leisurely paella lunch at all the best places in paella's birthplace.  We scoff at the versions we find most places outside of Spain--and inside of Spain for that matter (sometimes even in Valencia)!

So, what was the verdict on Elefante's paella?  Yum!  (That's a valid description, right?)  The seafood paella had all the right elements and that perfect taste.  It could have used a bit more soccarat (the "crunchies") but people often mistake that for burnt or overcooked when they don't know good paella, so we don't blame the chef for avoiding it.  It did leave the delicious oil residue on the plate and two very pleased, full bellies.  I started with a worthy companion...a burrata cheese salad (Elefante is the more varied Mediterranean restaurant versus the more strictly Spanish El Willy).  Cheese really is the most heavenly food, is it not?

As you can tell, we will be revisiting Elefante on a regular basis!


Mercato at Three on the Bund

Three on the Bund, a building at that address, contains a variety of restaurants and other spaces--everything from an art area to an Armani store and several restaurants and bars.  Mercato is the newest concept, a Mediterranean restaurant/lounge centered around a pizza oven.  The concept is shared plates of fresh food, with a big focus on the pizza oven and seafood roasted in the same oven.
I wanted to move in to the space--they have managed to create a space that competes with the views.  It is cozy and yet refined--the kind of apartment I'd like to have but would never be cool enough (heck, I probably wasn't cool enough to be here).  There is a bar and lounge area when you first enter, followed by the pizza bar with seating all around it and more typical restaurant seating, with many tables enjoying the amazing Bund views of the Pudong skyline.
We were fortunate to get a seat at the pizza bar with no reservation.  It was fun to watch the perfectionism of the pizza makers--I have never seen such concentration on stretching the dough.  They had such an efficient operation with each person managing their tasks and no one coming close to getting burned by one of the hot pizzas on the long pole.  The service was superb--one of those places where you have to be careful about drinking your wine down too much as they're always there to refill it when your glass starts to get low.
We started with an Italian salad with fennel and figs--super fresh and tasty.  From the roasted category, we went for the mussels.  Even though you can get a lot of mussels prepared with the typical garlic, aromatics, olive oil and chopped tomatoes, they all manage to be a little different.  These were stellar.  The roasting brings the flavors together just right and there was just a small kick too--making for a sauce you just had to "sop".  Our next dish was lobster ravioli--again quite tasty, and somewhat unique.  They seemed to have a bit of an Asian twist, with no sauce and a wrapper that had a bit of a wonton feel.  They were covered with fresh herbs and a bit of lemon, which kept them nice and light.  It was a bit of a departure from what we were expecting, but there was not a crumb left.  To wrap it all up, the dessert list was too tempting to resist.  We tried the hazelnut/coffee concoction.  It was listed as a hazlenut panna cotta with a coffee gelee and hazelnut chocolate crumbles.  That pretty much describes it, but doesn't really do it justice.  The flavors came together perfectly when you placed a little bit of the crumble with the rest and it was a relatively light but delicious ending to the meal.

We went upstairs to check out the views at the HOW (House Organic Wine) Bar and New Horizons.  HOW was a cozy little wine bar, with a small outside area/view, but New Horizons is the place to go for the view.  The front bar was unfortunately closed for a private party, but we'll definitely return for a bite or cocktail some time. 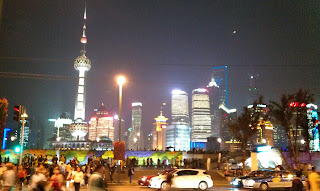