The little red stamp marks all papers as legitimate and is highly prized.  Show someone your official paperwork with the chop and you get happy, admiring responses.  Paperwork and bureaucracy reigns supreme and there are many careers built on protecting and managing the official company, agency, etc. stamp.  The significance is such that the stamp forger was a lifesaver in one story I read from the Cultural Revolution (it's one thing to forge papers to save a loved one, but without that "chop" skillfully crafted, it would be a failure).  I most enjoy listening to the loud echo of the "chop" reverberating through the speaker from behind the glass as it is proudly slammed down on every paper at the bank.

2.  Bikes
Most vehicular traffic is of the two-wheeled variety.  While cars have increased exponentially in the last several years in China, bikes and scooters still rule.  Cities like Shanghai limit car traffic (I cannot begin to imagine the noise, congestion and air quality if they didn't.) so you mainly see taxis, buses and every form of two-wheeled (or sometimes three-wheeled carts, etc.) transport.  Electric bikes are quite popular, whizzing by you without lights at night--beware!  Bicycles, motorcycles and scooters whiz by with babies in seats on the back, or more often simply "sitting"/hugging the lap of the parent.  A bike cart can carry furniture, an entire city block's laundry or 100 coolers.  Bikes, and even the scooters, are very reasonably priced and I have thought about getting one but I think I'm daring enough sticking to walking amongst them for now (sometimes I even put headphones on--and have yet to get hit!). 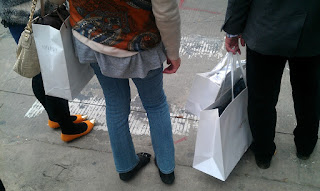 The economic reform of the last many years here has taken hold with a pent-up vengeance.  Ads blanket the city, from subway stops and constantly revolving elevator ads to actual LED built in to the sides of skyscrapers and a trip to our local EMart is an assault on the senses, with products everywhere and numerous employees pitching the latest special from a headset/mic.  A trip to the "fake market" or any area with street stalls is an exercise in resistance--don't look too closely or point at anything unless you really want to start the bargaining process.  Just about everything that exists is for sale here, depending on what you want to pay.  I have read some articles recently commenting on the "Chinese thriftiness" that remains, but retailers are pinning hopes on the younger generation taking on more Western spending habits and being drawn in to high prestige items.  I find that a shame, but I guess it is good for all the high end stores around here, which are most often completely empty.  I prefer the thriftiness and the addictive thrill of bargaining (I thought I would hate it, but must admit there is a certain feeling of "winning" that makes shopping much more exciting--of course, I'm probably not the one who is winning.).

There is just a constant "industriousness" (busy-ness?) here, the pulse of so many people in commerce.  There are an overwhelming number of people working everywhere (thus the resistance needed--don't imagine you are going to look at something in a store for long without someone at your side to "help" you, a funny exercise when you don't speak the same language and yet, they've often managed to sell me something!).  On a trip to a local Watson's (like a CVS or Walgreens but without the pharmacy), there were at least 7 sales women working in a tiny store, stationed at their particular areas.  Uh oh, lingered a little too long at the lotion display--time for a sales pitch and demo...

Ok--this is one of those instances where my post should perhaps substitute Shanghai for China.  I am sure there are peaceful rural villages with little noise, but that seems as foreign to me as China might to you if you're sitting on the other side of the world.  There are brief moments of quiet.  Generally this is a pretty "early" city, by which I mean that at night things shut down fairly early, dinner is eaten by 8 etc.  Of course, there are nightclubs and people out late, but the most peaceful times are at night.  There is even a brief period, from about 12-4 where there are only intermittent horns blowing (I still hear one or two if I don't have ear plugs firmly embedded).

I read an article with mouth hanging open that said the police were cracking down on noise, by doing things like fining the elderly people who dance and sing at the subway stops and parks.  WHAAAT???  There's a good idea--stop the healthy behavior (and something that always makes me smile) and let the horns keep blaring.  But, good luck doing anything about those horns--that would cause a revolution for sure.

I have found a couple really odd quiet spots--one Metro stop which for some reason is often empty and the high end malls/stores.  This is not a good thing, in Chinese thinking, where renao (essentially translating to "hot and noisy") is sought out.  The concept does not exactly translate literally, but the idea of something being bustling (and thus often hot and noisy--and chaotic to the Western view) equates to exciting and desired.  (See above re: commerce, where this concept definitely applies as well.  Do not go to your local Ikea or EMart on a Saturday or holiday if you have a headache.  Learn to enjoy the renao or figure out ways to avoid it, but you'll be missing out on the quintessential Chinese experiences.  Just think Black Friday all the time and you get the idea.)

These pictures only begin to show the constant presence of laundry in our daily lives: 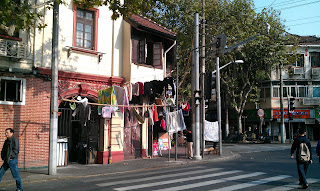 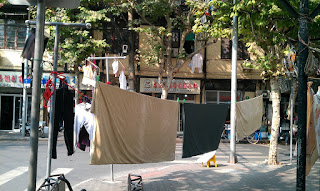 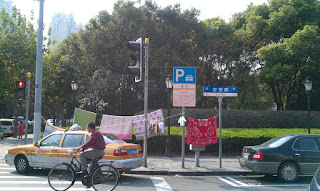 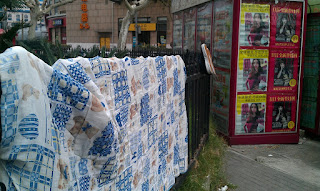 This is a dangerous one for me, as every day is an act of willpower not to buy the next adorable tchotke.  Everywhere you look you'll find some adorable panda, pig, bunny, Hello Kitty... something (slippers, wallets, p.j.'s, hats)--see Exhibit1 of my lack of resistance (actually it was a gift!). 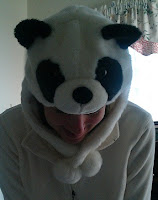 I also could not resist the cartoon pig coffee mug, which makes me smile every morning, and the bunny pajamas (which, in China, double as shopping wear).  Yes, adorable people of all ages (but mainly the older generation and young adult/teenage girls) wear their p.j.'s out and about for all sorts of activities, and these are no yoga pants or sweatsuits but full-on old school or fluffy pajamas.  So far my favorites have been the fully quilted versions and the man in plaid pink silk.  Even the dogs get in on the action, with their little outfits and shoes to match. 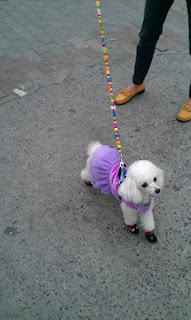