We picked our apartment in Shanghai based on several factors, plus a dash of just feeling at home there.  The process was quite different than some of our past experiences living overseas, where we could do much of the legwork online (and managed, mostly successfully, to do everything site unseen).  In China, we needed a realtor, particularly because of our lack of language skills, but it is also more typical here and as newbie expats, we would have been woefully unprepared to even begin.  We knew a little bit about locations and got some great advice from someone we met online, who was very kind in sharing her expertise and advice.

But, we had to be here to begin getting an idea of what we wanted--and touring helped us really narrow things down.  We had our choice (but also, two backups) by the second day of looking.  We love our apartment for many reasons (where else would we live on the 17th floor looking out--when it's clear--to this view?) but the location is a big one. 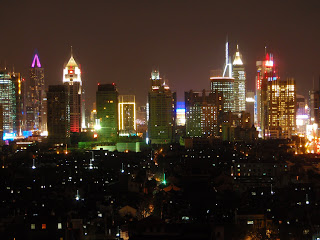 We don't live in an area highly populated by expats, though there are quite a few in our complex.  Our neighborhood lies in the heart (of what is left) of the old city and we are surrounded by lane houses, wet markets and tiny shops (for now).  We mostly get puzzled looks from other expats when we explain where we live, though everyone knows nearby Xintiandi which is one metro stop away.
Our neighboring streets are filled with activity all day, with street vendors, bikes and people going about their business.  Most of the sidewalks are filled up with small stools where people eat their noodles from the local vendors, merchandise spilling out from the stores, groups of men playing cards and lots of laundry thrown in for good measure.  Several nearby streets are packed with fruit and vegetable shops or stands and there is a large wet market right around the corner.
When we looked at our apartment, the proximity to a big grocery/all-purpose market was a huge plus and we still love having E-Mart so close (literally almost part of our complex so we say "I'll run downstairs to E-Mart").  E-Mart has a large grocery store and everything else from housewares to clothing and electronics and small appliances.  It is a crazed assault on the senses--especially if you hit it at the right time when you and thousands of your neighbors (and the people that come via special E-Mart buses) are all clamoring for the latest specials (which someone in a costume and mic will be pitching).  But, as we get to know our neighborhood further, we appreciate the little vendors (and their bargains) as well. 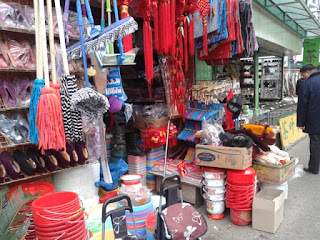 We still travel to hit the "imported goods" grocery stores that cater to expats and we get organic products delivered, but we try to balance that out with a local bargain more and more often.

When we first decided on our apartment, we "googled" to see what was around.  The answer being not a whole lot that shows up on google maps (surprisingly, the "mop lady", "plug guy" and street food carts don't have google listings!).  We have a great central location with easy access to many really fun neighborhoods and things to do, but the direct neighborhood is not exactly known for happening night spots (unless you count foot massage parlors and hairdressers).  However, right from the start we saw "Jackie's Beernest" and learned that it's a popular little beer joint, with an international following.  We arrived during national holiday and Jackie was closed for a bit--and then somehow time got away from us as we were busy exploring the whole city.  We passed by it almost every day and finally made plans to go with our neighbors.  The resounding thought was why didn't we do it before?

Jackie's Beernest is a tiny little storefront amongst the local shops.  Once you step inside, you'll find nicely paneled walls covered with some beer paraphernalia, a big table with several bench seats and a couple small bistro tables, one wall of refrigerated beers and another wall of beer, wine and scotch (and some assorted medicinal spirits complete with petrified--or pickled?--snake and lizard).  It feels like an extension of your living room, with a cozy, friendly atmosphere.
You are welcomed by Jackie and invited to check out the selection and pick your beer.  The selection is primarily Belgian, or Belgian style.  Jackie has really picked some of the tastiest beers and can help you out with the options.  Once you select your beer, he'll get you the special glass for your beer and it's time to sit, chat, relax and enjoy.  Jackie will offer you some peanuts to munch on and also has a fridge full of ham and cheese for some extra nourishment.  The evening we were there, he also shared some little rice/corn cakes from one of the nearby street vendors. (Cakes may not be the right word--they're little tubes, which the vendor pumps out of this mobile machine.  I had almost bought some the day before and it was nice to taste them.  They are surprisingly good--don't think typical rice cake, though they do have a bit of that Styrofoam texture.)

This place is a true neighborhood treasure and our only disappointment of the night was hearing that Jackie has plans to move away.  I guess the spot is a bit removed from the heavier expat neighborhoods and other bars and restaurants which might garner him more of a crowd, but from a selfish perspective we really hope he reconsiders.  This is a great neighborhood and we'll invite everyone over!