If you would have told me on December 31st 2011, that we would be living and working in China a year later...  I would have told you that you were crazy!  Nonetheless, we rang in 2013 in Shanghai after moving here in October.

After spending a few months in Spain in 2011, we were determined to get back and for a longer period.  We worked hard to make all the necessary arrangements and our 2012 adventures started somewhere over the Atlantic.  We landed in London on New Year's Day 2012 and enjoyed a long layover at the Yo-tel Gatwick before heading to our final destination - Valencia, Spain.

Ah Valencia, she welcomed us with her warm sunshine and charming culture.  Christmas is traditionally celebrated through January 6th in Spain, so we were in time to witness the decorations, last-minute shopping and celebrations leading up to 3 Kings Day.

We settled into our new apartment in the Barrio del Carmen and quickly got back into the swing of Spain... remembering almost instantaneously why we fell in love with this country, people and culture.   We had been to Valencia several times in 2011, but always short trips.  This time we had 6 months (minus some travel) to explore all Valencia has to offer.  See the numerous past Spain posts for more.

We were both going to be working this time - US hours - so this immediately felt like a move and not a vacation... although we did have round-trip tickets.  It was a slight adjustment getting used to working different hours and a different routine, not to mention finding reliable internet in the old city.  But we got adjusted fairly quickly and this was home.

In February, we took a short trip... back to Italy again, Rome this time and met our good friends Curtis and Teresa from Florida there.  It was a fantastic trip full of food, drink and history.  If you missed the blog post on Rome, you can find it here.  As well, see our many pictures from Rome here.

We returned to Valencia to find the city getting ready for the annual Fallas festival.  We had planned from the outset to spend the month around Fallas in Dénia.  Fallas in Valencia is a little too wild and crazy, especially trying to work, so it was planned for us head south for a month.  We enjoyed Fallas in Dénia last year, and were extremely excited to be returning again.  We stayed at our same apartment as we did in 2011 and were very happy to reconnect with all the Dénia locals at our favorite places in town.

As much you can plan travel down to the smallest detail, there are always unexpected snags.  Some small, others not so much.  Upon returning to Valencia from Rome and preparing to make the trip to Dénia, I learned that I would be losing my job.  This was most unexpected and unfortunate.  Adding to it that we are away from the US, made it more so.  However, if there is one thing traveling has taught me, its "go with the flow".  No problem is too great and there is always a solution - most often, with a silver lining - awaiting you at the other end.

One of the best things about traveling and being away from "home" is that everything is fresh and new.  Possibilities seem endless and things that you would never usually consider doing, somehow seem perfect and necessary.  With the right attitude, anything can be a good thing.

Although offered a couple, I decided to not try to find another job with my company and go ahead and leave.  I enrolled in a TEFLA  (Teaching English as a Foreign Language to Adults) class in Valencia.  I interviewed and was accepted into the May class.  I took the time in Dénia to enjoy my surroundings, Fallas and brush-up on my English...  its been a long time since I studied English.  Moreover, the learning I was doing was Spanish...  not English.

We returned to Valencia in mid-April, but had planned a road trip of Rioja and the Basque country of Spain earlier in the year.  Job or no job...  we were not cancelling the trip.  Plus, I love driving aroud Spain.  We spent a week touring the north of Spain, enjoying scenery very different than other areas of the country, and some of the best food and drink we´ve ever had.  Highlights of our journey can be found here, but by far the most memorable part of this trip was the day at Basque Gastronomic Society, eating, cooking and learning the real secret behind making Spanish rice.

May was now upon us and it was time to hit the books.  I was prepared as I was going to be for my TEFLA class.  Having no idea what to expect, no idea how I´d do... only that I was sure I wouldn't like it, I jumped in with both feet.  My only 2 expectations were that 1) I'd be the oldest person in the class and 2) that I'd be the only American.  Both were wrong.  In fact everything I expected was wrong.  I didn't like the class, I loved it.  It was incredibly rewarding and enlightening, also very intensive and required some very long hours.  You see, the job I was doing benefited no one...  our stockholders, maybe.  Sure, I was helping the advancement of technology, but is that always a good thing?  Here I was truly enriching someone's life by helping them gain a skill that they could use to get a (better) job, travel or just become a more well-rounded person.  I was making an ever so small difference in the world...  it felt good.  Every day I walked from our apartment in the Carmen, across the bridge over the Turia to the metro.  I enjoyed the short train ride with the other commuters and got to class.  Class taught me less about English as a language and more about how to teach it... which I truly enjoy.  It's certainly not curing cancer or solving world hunger, but rewarding all the same.  I finally figured out what I want to be when I grow up...  funny that it only took 40 years.

Also in May we had a nice visit from Shannon's parents.  I missed out on a lot of the visit due to my class, but we did go down to Dénia for a day and enjoyed a fantastic paella lunch at Agua del Mar...  one of our favorites.  It was nice to be able show them Valencia and Dénia and have them understand what we enjoy so much about this part of the world and travel in general.  It was around this time that my company (the one that let me go just a month prior) reached out to see my interest in a job in China.  I entertained the idea, but teaching English in Spain was now the goal...

June was spent in Valencia and Dénia, watching Spain dominate Euro2012 and looking for some jobs teaching English.  Although I had lots of offers, it was a lack of a Spanish work permit that prevented my getting a job.  It is truly a catch-22 in Spain.  You need a contract to get a work permit, but you need a work permit to get contract.  Frustrated but determined to get back, we left Spain in early July after receiving some bad family health news and rushed home to be there.  Luckily everything turned out to be just fine in the end and all are happy and healthy.

Realizing I couldn't legally teach English in Spain as I wanted, and also not wanting to be in US (where I had a couple offers), I accepted the job to go work in Shanghai.  The job is good for travel as I literally cover the entire world and so far, it has been a good decision.

We returned to Florida in late July and I boarded the plane to China on August 1st.  It takes a full month to get all of your visas and permits in China.  So, I was in Shanghai for August.  I found an apartment, got acclimated, etc.  Shannon was back home (except for a short visit) making preparations to sell our house and all of our stuff.  We had the house rented while we were gone in Spain and came home to realize none of our "things" really mattered any more.  Sure there are sentimental items that we keep and treasure, but our TV, sofa, pots/pans...  all replaceable and not needed.  It is true what they say about the stuff you own, eventually owning you.

I returned to Florida in September and we spent the month getting ready for the move to Shanghai.  We "moved" to Valencia in 2012, but when you start your journey with a return ticket in your hand...  its not really a move.  When you sell your house, your car, everything you own and buy a one-way ticket...  that is a move.  We timed everything as well as we could.  We had an offer on the house after 3 days on the market.  Wow!  We had an estate sale...  full liquidation, everything must go!  And it did.  It is quite liberating to let go of everything, nothing holding you back and free to roam. 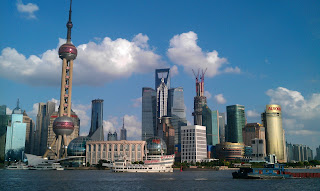 We've been in Shanghai now for 3 full months now and I must say I love it.  We don't speak Chinese, we don't need to - but it sure would help sometimes.  We have a nice place in the center of town, close to the metro and places we like to go.  I'm traveling for my job, not too much so far...  and we are learning how to live amongst the Chinese, in their culture.  You can read recent posts for more there.

The goal of teaching English in Spain is not abandoned, just delayed.  The Spanish economy isn't looking any better than it did 6 months ago and realistically, this probably isn't the time to be there.  There are tons of English jobs in Asia and my eyes are always open for the right opportunity...  and it would be a great experience to teach here.

So goodbye to 2012, what a year...  it's 2013 and for now, we are content and happy to be here.  Every day is a new adventure and that is refreshing.  It's not without the occasional snag, but travel never is and the snags are what it is all about...  really.