So, not surprisingly, where to eat in Hong Kong took some priority in our (my) planning.  We have become fairly enamored of several Cantonese restaurants in Shanghai and I was determined to take part in the local dim sum and tea house ritual.  Here are a couple of our yummy (or interesting) experiences, covering the gamut from extremely traditional to contemporary fusion.  Like Shanghai, you can truly get it all in Hong Kong (it just comes with a lot less honking and pushing in Hong Kong)...

This is a quintessential Hong Kong experience, unchanged over many years.  We were a little wary as we had heard they make no concessions to tourists and therefore no English (or really even Mandarin, of which we at least know a few words) so we thought we'd take a look and "scope it out".  Heading upstairs to the dining room, the place was packed.  Bustling with "renao", the hot, sweaty loud atmosphere that indicates a place is great...we were quickly swept up in the action.  Before we could decide what to do, we were ushered in to a small corner spot, a stool procured to squeeze us in an already packed table of about ten.  Guess we will go with the flow!

We were brought some dishware along with hot water and the lady next to us was kind enough to gesture and briefly tell us we should wash out our cups/dishes in the boiled water.  So, we followed along as instructed while glancing around trying to get the flow.  Being dim sum, various bites are brought around on carts...but as I had heard, at this place, you generally don't (can't) wait for them to come to you.  The patrons jump up when a cart comes out of the kitchen and the best dishes are quickly gone.  We easily got some sweet, steamed bread that came by the table and I then braved the carts to see what I could get.  I got some tasty shrimp dumplings and then got a bit stymied by the pork choices (the meatballs looked harmless but were chewy to say the least).

After a few snacks, we felt like we'd had a sufficient experience to say we'd done it.  I can't say that the food was anything special, but it was something unique for us.  In a world where so much becomes modernized and more homogeneous, this was a fun trip back in time, so I'm glad we braved it.  We were far from mastering the process...as we left still pondering how we could have managed to get some of the better dishes that people seemed to custom order.  Next time, perhaps we'll go with a Cantonese speaker and see how the experience contrasts.

When we arrived we were afraid we had somehow missed Dim Sum hours due to a sign out front regarding tea hours, but it simply meant we had missed the special prices (reduced very early and later afternoon).  This was probably a good thing because we were able to get seated immediately (whereas on our way out, there were probably over 100 people waiting).

This place has the large Chinese banquet hall look and was definitely several steps above the first tea house in elegance.  They had a massive dim sum menu as well as other a la carte dishes.  They do have some carts that come around with items (particularly sweets), but most items are ordered with a checklist and brought to you from the kitchen/stations.
Everything I had was delicious.  It was typical dim sum fare, a lot of steamed buns and dumplings.  My favorite was probably the roast pork snack (shocking as a previous non-pork eater and former vegetarian, this is often my favorite dish).  Melt in your mouth! 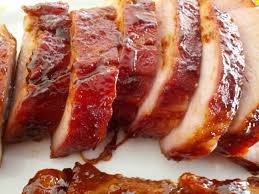 Even though no English was spoken, we managed just fine as the menu had English and the waitress took control.  We started out observing to figure out what we might have to do in terms of picking items but once we realized we would order most items from the checklist or menu, it was easy.  I probably could have completed the checklist myself, but the waitress did it for me as I pointed to items.

The only "faux pas" we probably made was that we did not clean out our dishes (a la the previous place) and later realized people were doing this.  This is often done using the weak tea they provide (as we saw people doing here).  Oh well, no one looked too strangely at us and we drank the tea.

Leafing through some freebie foodie magazine while we ate breakfast, I read about Le Chef restaurant.  It was described as Spanish-influenced and the overview of the meal sounded very tempting.  With rainy weather later that evening, we decided it would be nice to have a reservation for a nice dinner rather than wandering around searching.  It is actually located in a Metropark hotel (we were also staying at this brand) so we called our concierge to book us a table, though we probably could have walked right in.  It was a nice setting, very well decorated and quite "swank" and we had a great window seat to watch the bustle of the streets below.

The food lived up to the magazine's praise.  It was definitely influenced by molecular gastronomy, but never in sacrifice of taste.  They have a couple set menus, but we decided to go a la carte.  Bryan started with a wagyu beef appetizer, which was simply prepared to highlight the delicious beef (I tasted a piece and have to say, this could win me over to being a beef eater).  The beef was adorned with cherry tomatoes which held a nice little surprise as they were filled with salt flakes (and maybe olive oil) that contrasted and highlighted their fresh sweetness.  He also got an iberico ham plate.  The ham was delicious, as true quality iberico always is.  This is probably not the highlight dish for a place like this, since the ham really stands on its own without help from a great chef.  It did have an interesting "olive oil powder" served with it, which was innovative if not special in taste.  We shared a "mantis crab" dish (which I think is really called a mantis shrimp).  The large shrimp was done to perfection and the waitress poured a wonderful hearty broth on top of it.  The shrimp sat on a bed of fine seaweed and the whole thing worked perfectly together.  Finally, we split a main dish of lobster.  It was a small but delectable portion...again, done perfectly, so the sweet lobster meat stood out.  This was served with a mozarella "balloon" which was another interesting molecular touch and a "turnip ravioli" which tastes better than perhaps it sounds.
It's obviously a testament to Hong Kong's dining scene that this place was not more crowded. It was a real treasure, but much like Shanghai, Hong Kong attracts some of the world's top culinary talents and you can get anything from fabulous $1 dumplings to multi-course meals that cost more than the average per capita income.

We started off our daily "bites" in Hong Kong at a  great little cafe right next to our hotel called Peace Square.  They had wonderful breakfast sets and great coffee, along with a pretty diverse lunch and dinner menu.  It was a bright and peaceful place, a wonderful little neighborhood treasure.  Why anyone would choose the Starbucks down the street remains a mystery to me.

When we post about our day trip to Macau, I'll share some of our tastiest bites of the trip...our little bit of Portugal in Asia.  Yum...I'm day dreaming about Portuguese egg tarts now...