You can get just about any type of food in the world in Shanghai.  We've previously shared a couple of our Mediterranean favorites and have newly discovered Casa 700, a great Spanish restaurant and DeMarco for outstanding Italian.  But, of course, the greatest number of options come from the regional cuisines of China.  Again, you can get it all here, from fiery Sichuan hot pot to crispy Beijing duck.  I constantly bemoan all the pitiful renditions of Chinese food I ever had in the U.S. but I'm dedicated to overcoming that by sampling as much as I can here.  Here are a few short reviews of some we have tried: 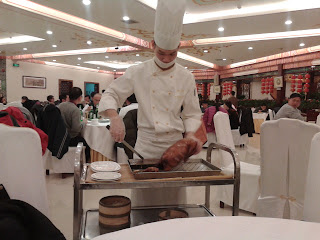 This chain from Beijing is known for its duck, though it has a huge menu spanning various Chinese regions.  While a Beijing native would likely pick a local favorite over this large chain, this place does know what they're doing.  When we crave some of that crispy skin, it is nice not to have to travel to Beijing (though I look forward to sampling some there!). Your duck arrives on a cart and is skillfully butchered table side (you can tell these guys do this every day by their speed and skill) and presented to you along with scallions, sauce and the pancakes to roll the pieces of duck in to tasty little pockets.  Small bits of the crisp skin come along with a small bowl of sugar for dipping (if you've never had it, have no doubt!).  A lot of patrons get the carcass in a bag to make soup later.

The atmosphere here is nothing great--think large banquet hall--but always lively and packed.  It is fun to go with a group so you can enjoy the duck and also try some of the many other dishes.

Tidbits: The menu is bilingual but the staff generally are not.  You can easily get by with gestures, though.  The staff who answer the phone can generally understand enough to get a reservation and you will receive a text message confirming your reservation and providing the restaurant address/info. (automated, so only if calling on a local mobile #).  It always seems pretty crowded, so a reservation is recommended.

This is a favorite amongst Shanghai expats for homestyle Yunnan, along with the more upscale Lost Heaven. Everything we sampled was tasty and they also have one of the most extensive international beer lists in Shanghai.  This place is a bit dingy and not much on atmosphere, but it is fun to taste their wide array of choices to sample the homestyle cuisine of Yunnan (some are even daring enough to try the various bugs such as fried honey bees).

Tidbits: They obviously cater a bit to expats, so the menu is bilingual.  This is a great place to go when you're in the mood for beer as you'll rarely find such an extensive list.

Tsui Wah originated in Hong Kong and has several branches throughout Shanghai.  We discovered it because the Tianzifang branch was always packed with locals so we knew it had to be good.  We've been to the Tianzifang branch and one near our home, they are quite consistent.  The wait at Tianzifang, especially, can be quite long.  Tsui Wah offers up a large menu of mostly Cantonese favorites along with some of the popular western imports and unique blends made famous in Hong Kong's cha chaan tengs.  They run a bakery where you can get the various popular Cantonese baked goods to take away, as well.  The food is consistently tasty and pretty inexpensive.

Tidbits: The menu is in Chinese and English, but the staff are mostly Chinese speaking only.  We have always managed with our limited phrases and gestures, though.  Expect a wait at Tianzifang and many of their branches.  Grab a pineapple bun or other baked good to tide you over.  Pay your check afterwards at the cashier.

For a bit of better atmosphere with the same tasty Hong Kong dishes, Molokai is a great choice.  It has a clean, modern design with an open air kitchen.  Everything we have tried is tasty and they have a nice array of choices.  Consider saving room for some baked goods, such as the sinful buttered condensed milk toast.  They have a creative list of drinks too, from the ubiquitous milk tea to fruit combinations and even some innovative alcohol concoctions.


This one does not necessarily fit under one Chinese region, as it serves an array of dishes inspired by various Chinese cuisine and ingredients, often with a bit of a twist.  I would say this place is all about the atmosphere, but the food deserves more credit than that.  However, the atmosphere and presentation make it special.  Somehow they have created a innovative, modern atmosphere without pretension.  It is all a bit mysterious, with a "trick" front door and a bathroom that is like a hall of mirrors.  It is interesting and yet the overall effect is very "chill".  We sat on the 3rd floor, a romantic setting amongst the tree tops in the Former French Concession.  They also have a great bar and lounge area downstairs where I enjoyed the most delicious dessert coffee ("floating coffee", i.e. an ice cream float made with coffee).

Favorite dishes: The spicy tofu was great, but I think the winner was the udon noodles in vinegar (hearty udon noodles with a sweet sauce almost reminiscent of cinnamon, veggies and pork).  The stir fried beef was also delicious, and every dish looks as good as it tastes.  The prices are not bad considering the atmosphere.

Tidbits: Don't wait until you're desperate to go to the restroom as it may take some time to figure it out.  There's a secret to getting in the front door (google it if you don't want to play detective).  If you have poor eyesight or bad balance, this might not be the place for you.  Check out the cool dumbwaiter system traveling up from the first floor.  Plan to get a drink or coffee in the lounge afterwards, you'll want to spend some time here.

I decided to separate Shanghainese places in to another post, so look for more deliciousness to come, along with a post about my beloved dumplings (again, I think that will need to be its own as there is so much dumpling deliciousness!).  Happy eating!