We made a last minute decision for the second day with our guide in Chengdu to go to Dujiangyan instead of Leshan (home of the giant Buddha) after hearing about the holiday weekend traffic.  The Buddha will have to wait!

Dujiangyan is an irrigation infrastructure built in 256 BC by the Kingdom of Qin. It is located in the Min River and is still in use today to irrigate over 5,300 square kilometers of land in the area.

There was quite a bit of traffic to get out of Chengdu, but the site is a relatively quick drive on the highway.  Our guide had us dropped off at the best spot at the top of the mountain to enter the park and hike down. 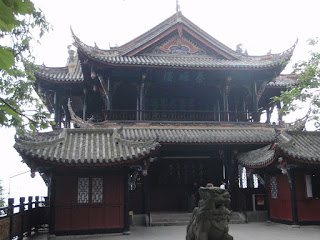 Though it was a bit foggy, you can get the idea of the scale of this site from the view. 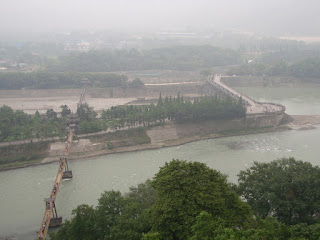 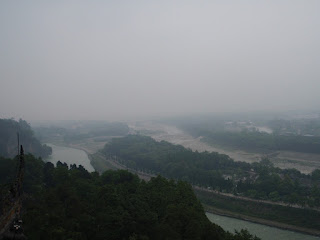 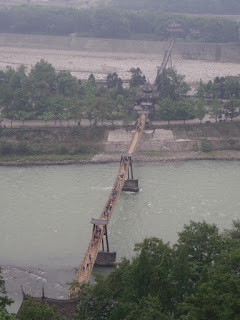 We hiked along the mountain stairs to the various temples and viewing points.  Even with holiday crowds, it felt very peaceful.  The mountain is a cool wooded escape from the nearby city.  We stopped at numerous Buddhist and Taoist temples along the way with great historical context from our guide. 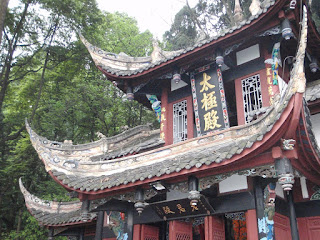 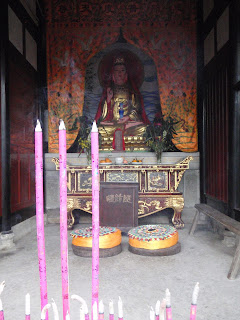 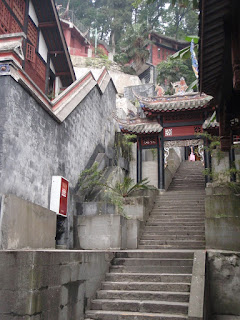 About halfway through the hiking, we took respite at one of the Buddhist temples serving tasty vegetarian cuisine.  For about three yuan (.45 cents), we got different styles of rice noodles with a combination of spices and a pungent vinegary sauce.  Even with our guide asking that mine be made less spicy, my lips were completely numb from the Sichuan peppers by the end.  It was a delicious numbness, though.

After reaching the bottom of our hike, we crossed the suspension bridge over the main river.  It can quite a harrowing experience crossing it, but that did not discourage the crowds.  The Anlan Bridge, also known as Couple’s Bridge is 261 meters long across the inner and outer river.  There have been various incarnations of the bridge but the latest concept was proposed by a man and his wife after prior bridges were burnt in war…thus “couples bridge” in their honor. 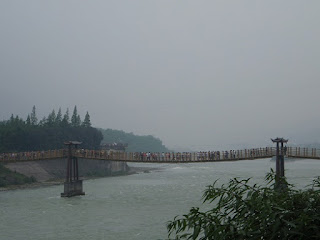 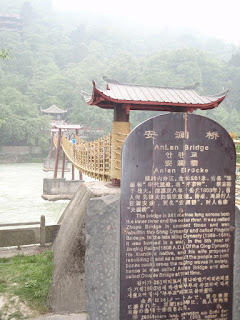 Once we got across the bridge, we learned more about the irrigation project.  A simple design diverts the water in to two rivers, allowing better control of flooding and funneling water for use throughout the area.  A simple, yet massive project (especially when you consider when it was created), which has had lasting benefits.  Here is the old suspension bridge atop the "secondary river" which was currently pretty empty during the dry season. 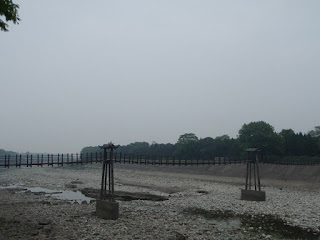 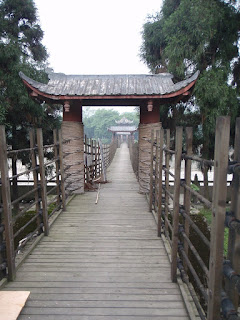 There is some information explaining the project and showing the materials originally used to build the dams.
After crossing the bridge, you could see some great views up the mountain from a new vantage point. 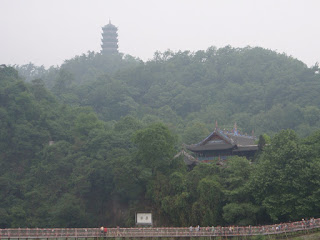 There is a lovely extensive park area to walk around with a variety of ponds, gardens and structures. 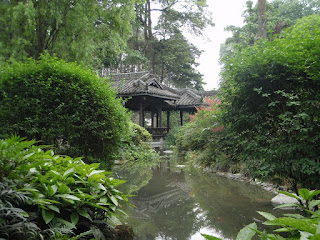 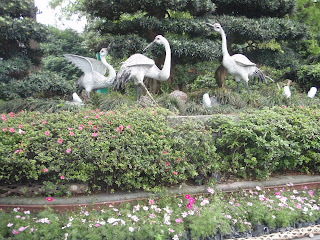 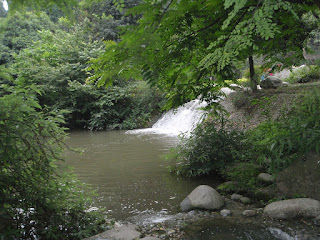 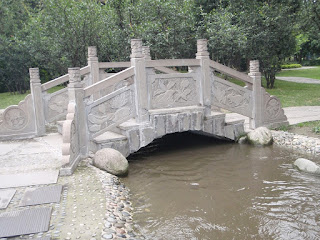 Upon leaving the park, there are additional cultural sites to see.  We walked across the intricately decorated covered bridge in to the cultural center. 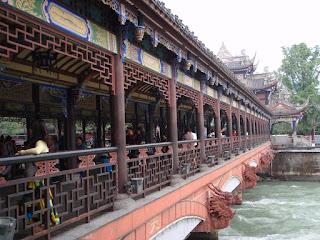 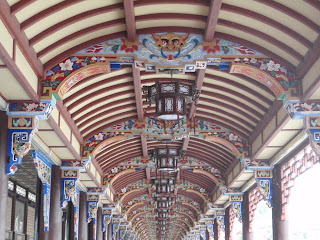 If you need some refueling from all the steps, there is a great street food culture here.  One vendor gave us a taste of some homemade yam chips and Bryan got a sort of meat pancake/empanada (obviously not the official Chinese name for it). 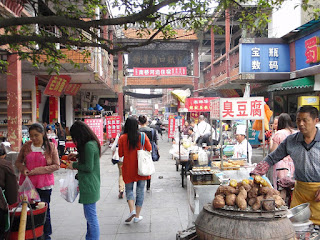 We climbed up to another temple area and read about the inscriptions about the different gods and mythical creatures of Taoism (many quite spiteful, including the masters of the various forms of hell with some pretty vivid punishment descriptions). 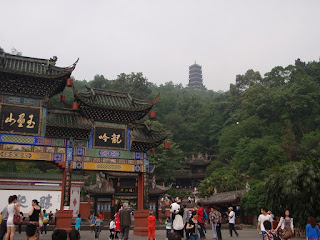 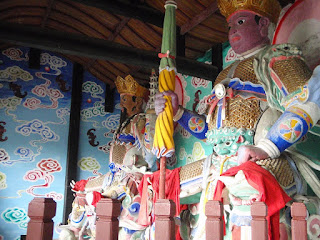 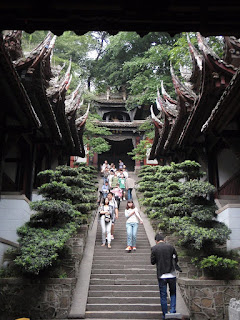 I would be offering some prayers up after reading those inscriptions too.  The trees outside the highest temple were filled with prayer offerings/wishes. 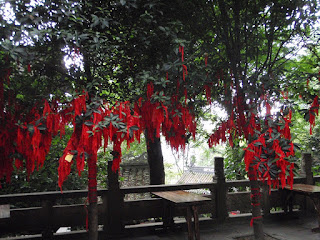 The beautiful calligraphy made me feel ashamed of my lack of initiative with Chinese characters. 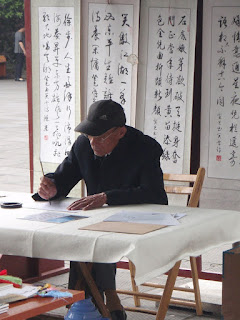 The final steps of the ancient city were a mix of old and new, with shops and some modern panda graffiti lining the way. 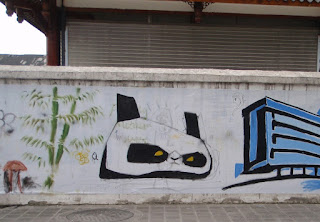 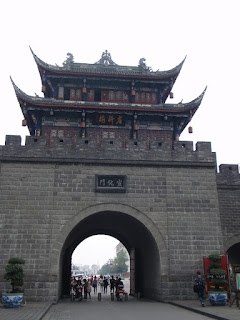 As we left, we were fully immersed in modern day China (on a holiday weekend no less) with a mad rush of people shopping and holiday deals being promoted everywhere.  Even the traditional parades had been remade in to a commercial for some local electronics shop.  It was a bit shocking after the peace of the mountain and we were ready for the peaceful ride back to Chengdu in the air conditioned car.