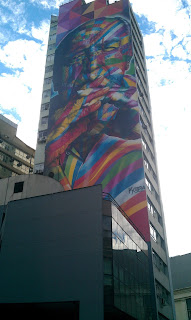 Murals, Street Art - call it what you want.  The Brazilian locals call them "grafites" and they are everywhere you look in São Paulo.  We usually don't write about business travel, but after a week in São Paulo for work, I found myself with an extra day thanks to a problem with my return flight.  I decided to make the most of it and check out some of the city.  I've been here before, but most of my sightseeing was done in the taxi between hotel and office/airport.

According to wikipedia, São Paulo is the largest city in Brazil, the largest city proper in the southern hemisphere and the Americas and the world's seventh largest city by population.  So what do to?  Not having any transportation or really an idea of where to go in this vast city, I decided to take a local tour.  I chose the "street art" tour offered by AroundSP.com.  While expensive, this tour was exactly what I was looking for.  My guide, Luiz, picked me up at the hotel and we were off.


Our first stop was the most popular grafite in the city.  A combination of many different styles and a collaboration between some of São Paulo's best artists.  Located in the central park of São Paulo, Ibirapuera Park, we saw the work by Os Gêmeos (The Twins) with help from "Suzie".  My guide explained that you can always tell the work of "The Twins", when you see the small eyes of the characters.  The Twins, are identical twin brothers in their late 30's from São Paulo that have grown quite a following for their work around the city.  Suzie collaborated on this work and you can see her influence in the "life like" women depicted in the scene.

We made our way from Ibirapuera Park to the next highlight on tour, the subway underpass.  This is a stretch of elevated metro line that has become a favorite spot for local street artists to display their craft.  Each of the many support columns for the metro line have been used as "canvases" for grafites.  This area stretches on for about a kilometer. 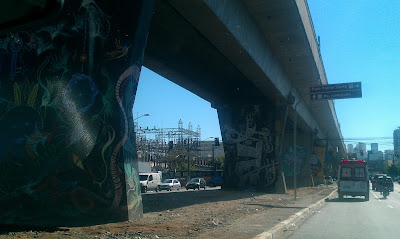 Some of my favorite from this area were:

As we braved the relentless São Paulo traffic on our way to Beco Do Batman (Batman Alley). We saw many more, unique works along the way... 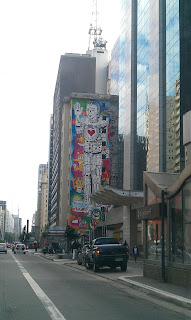 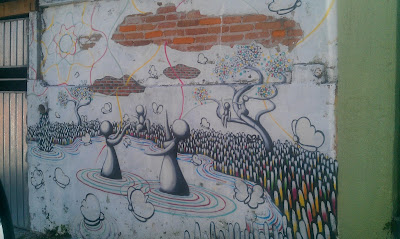 Our final stop was Batman Alley, in the Vila Madalena district of São Paulo.  This is like an open air grafites museum, featuring the best of the best of São Paulo artists.  Upon arrival, it is a little overwhelming.  There is so much art, it is hard to try to focus on one thing at a time.  My guide explained that many of the works here are commissioned and an artist is given a specific area.  This means their work will be preserved until the artist chooses to paint something new on their reserved space. 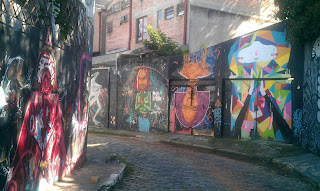 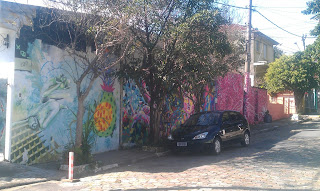 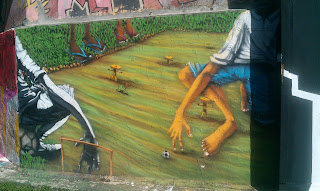 I first found my appreciation for street art while we were living in Spain. In China, it is considered more vandalism than art and unfortunately there are very few areas where it's sanctioned.  I'm really glad I was able to experience São Paulo's scene.