The Capital City: A Visit to Beijing 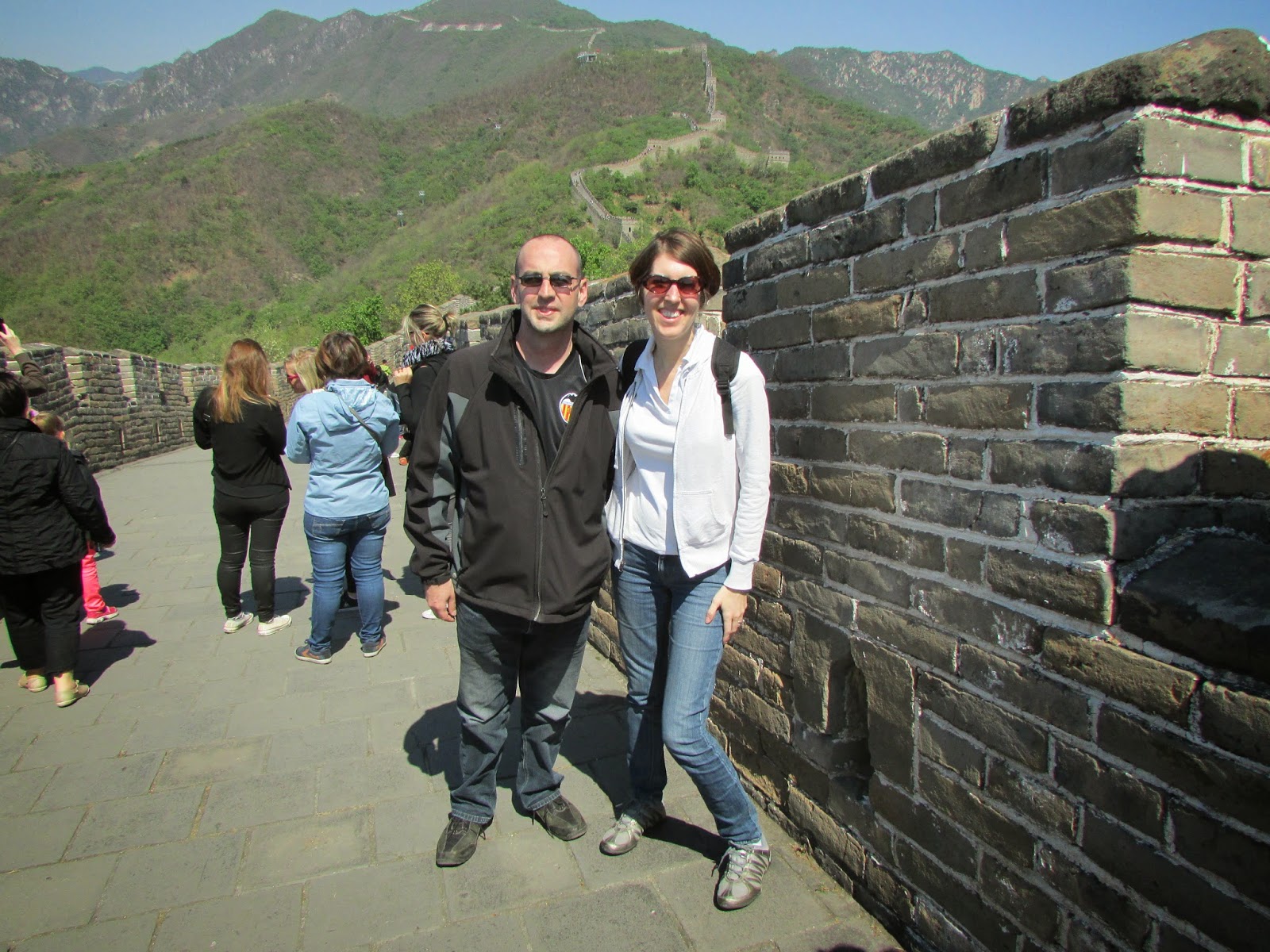 After almost two years in China, we felt we had no choice but to make a trek to Beijing on the latest holiday weekend. It becomes pretty embarrassing to admit you haven't seen the Great Wall when it's one of the most known sites worldwide. So, off we trekked with millions of other holiday-goers (when we told people we were going to Beijing for the holiday, the reaction was uniformly horrified over what we'd experience with the crowds).

We chose to take the high-speed train, which takes just under five hours. Again, some people wondered why we wouldn't just fly (prices are actually about the same) but as we sat back and enjoyed the leisurely journey, we knew we'd made the right choice. No airport security or arriving an hour ahead, a chance to read and watch the world go by (no free meal, but then again, no airline food indigestion) and almost 100% on time. We had a bet going with a friend who was originally going to go along for the weekend, but was going to fly, about who would arrive quicker...I am sure we would have won.

Because this was a quick trip and anticipating the holiday crowds, we narrowed things down to the list of "must dos" and figured we could always come back another time to explore more. We stayed at a great hotel...the Park Plaza Wangfujing (highly recommended!) which was relatively affordable but a really comfortable place with loads of amenities. I had wanted to stay in one of the hutong inns with a little more personality, but the better ones were booked and to be honest, the comforts of this hotel ended up being quite nice. They did the "club level" thing so common in China, where you get happy hour (which typically includes enough food to make into dinner) and breakfast. Both were generous and even though this can discourage exploring local spots, it is a relief on a busy holiday.

Our first stop was for a roast duck dinner. Since we have branches of two of the more famous spots, Quanjude and Dadong, in Shanghai we opted for the third choice the hotel recommended, 1949 (if you don't get the reference, it's time to review your China history). It was probably a bit more posh than needed for a roast duck place, but it was a beautiful environment and the duck was tasty. 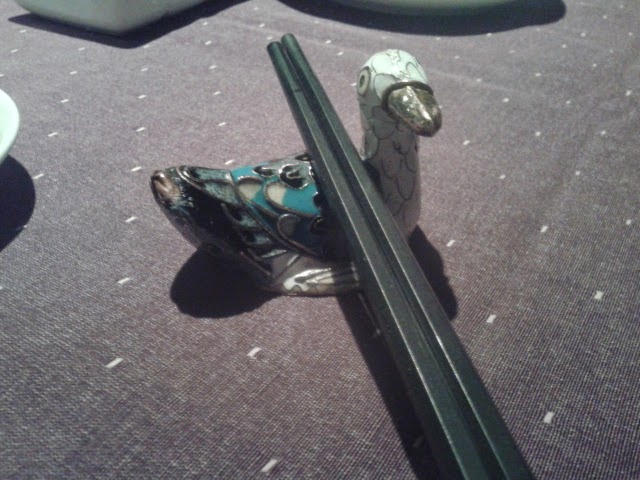 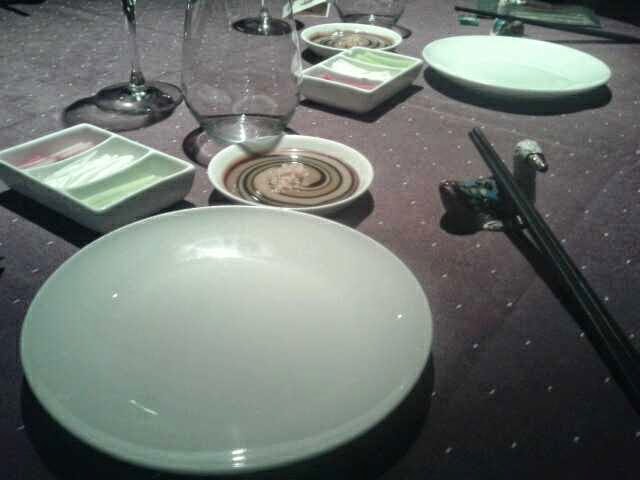 If you haven't experienced Beijing duck, the server brings the whole duck to the table and expertly carves it before your eyes. 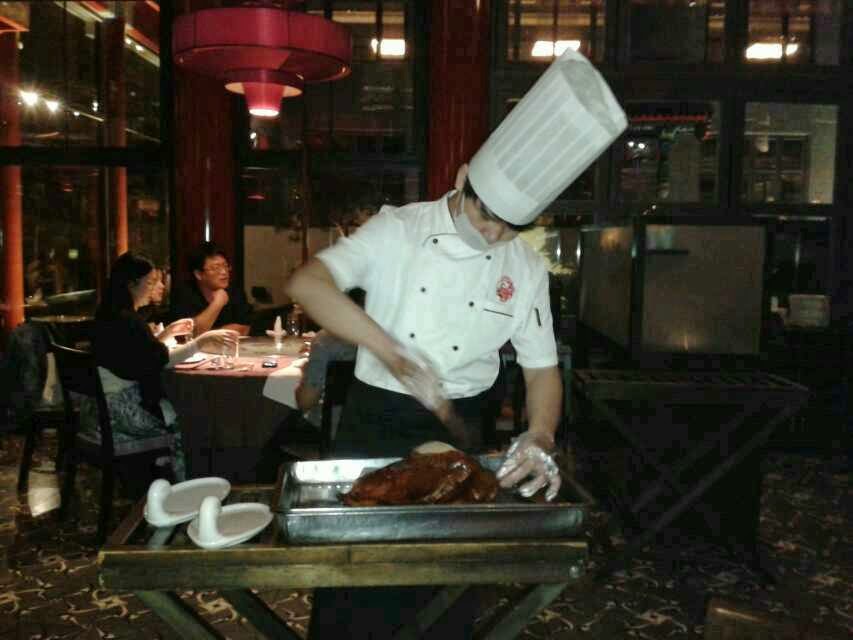 Typically, you eat it in little pancakes with sliced cucumber and spring onions and a sweet sauce. Here they mixed in a peanut sauce, which was a nice twist. They also provided two small sesame buns to make a little "sandwich" out of the duck as a twist, along with the pancakes. When we've eaten at Quanjude in Shanghai (highly recommended!) one of our favorite parts is eating the crispy skin dipped in the small bowl of sugar, which we missed here. But, it was fun to try a slightly different style. 1949 had an extensive menu of specialties, but only being two of us with a whole duck to eat, we didn't have the capacity to try much this time.

The next day we were up bright and early for our full day tour. We hired a driver and guide to take us out to the wall and other major sites (the wall is quite a distance from Beijing). We choose to visit the Mutianyu section, slightly less crowded and touristy than the most visited Badaling section, but well-restored and easily accessible (and still with plenty of stuff to buy if you so choose). 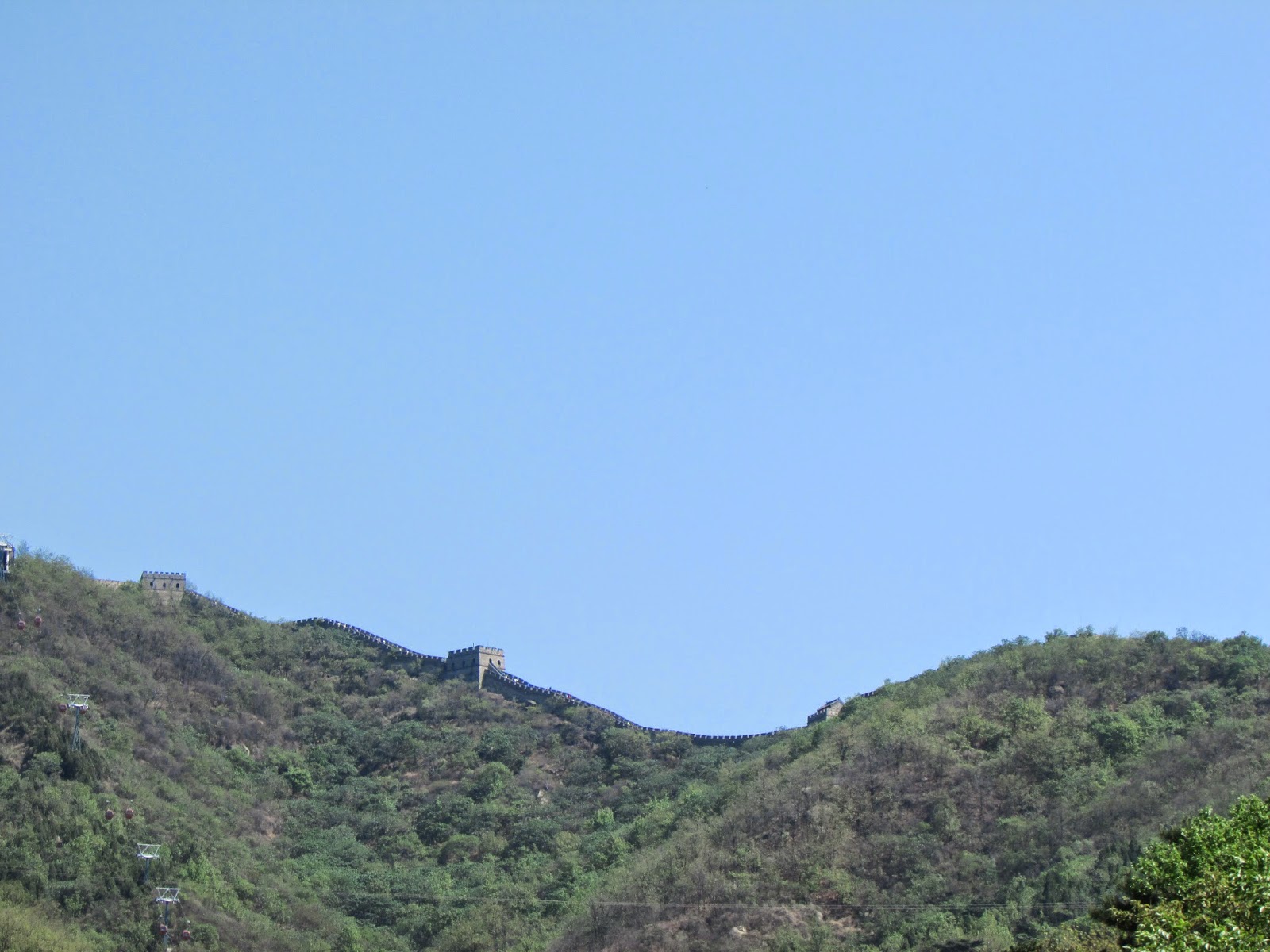 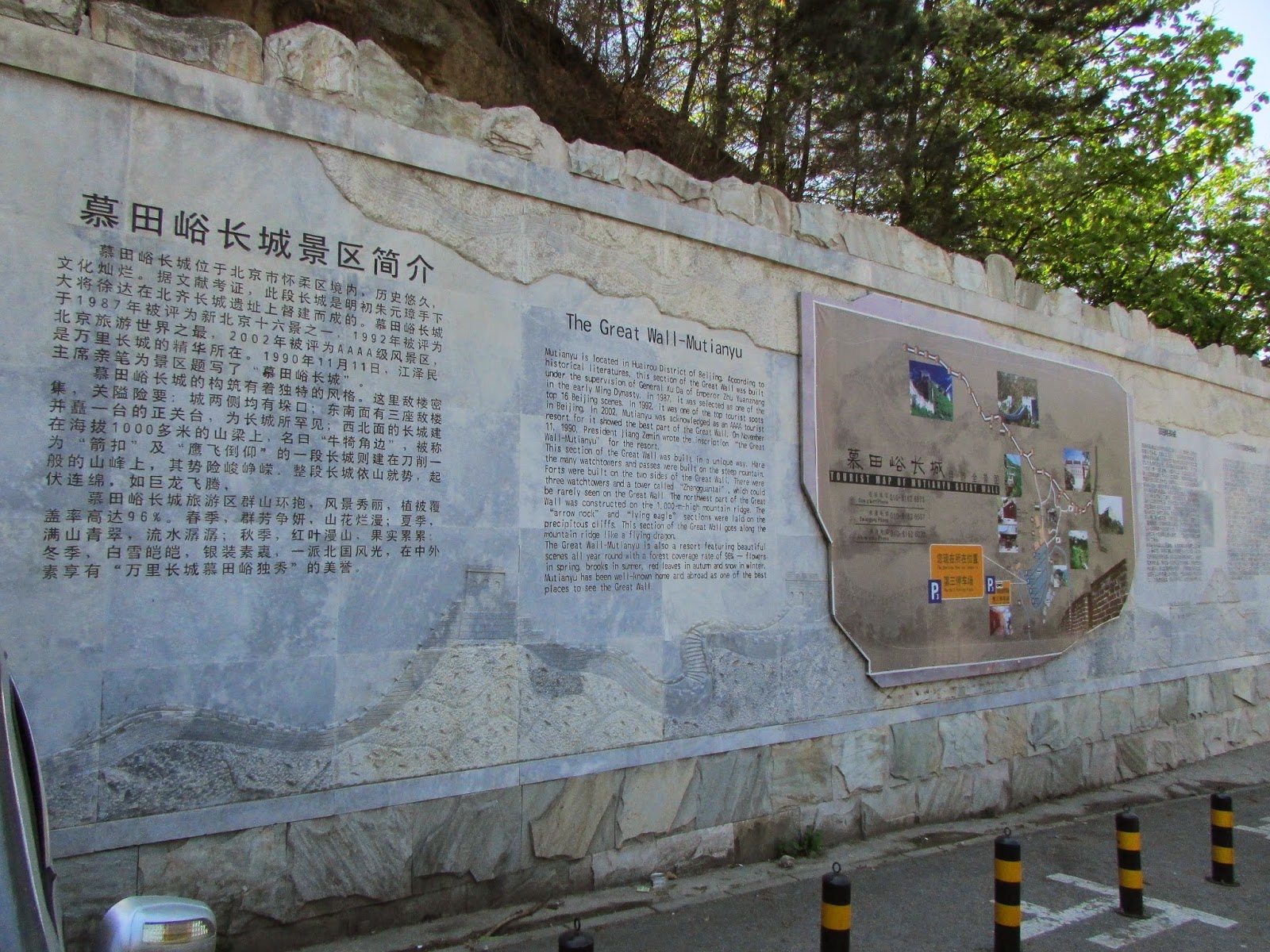 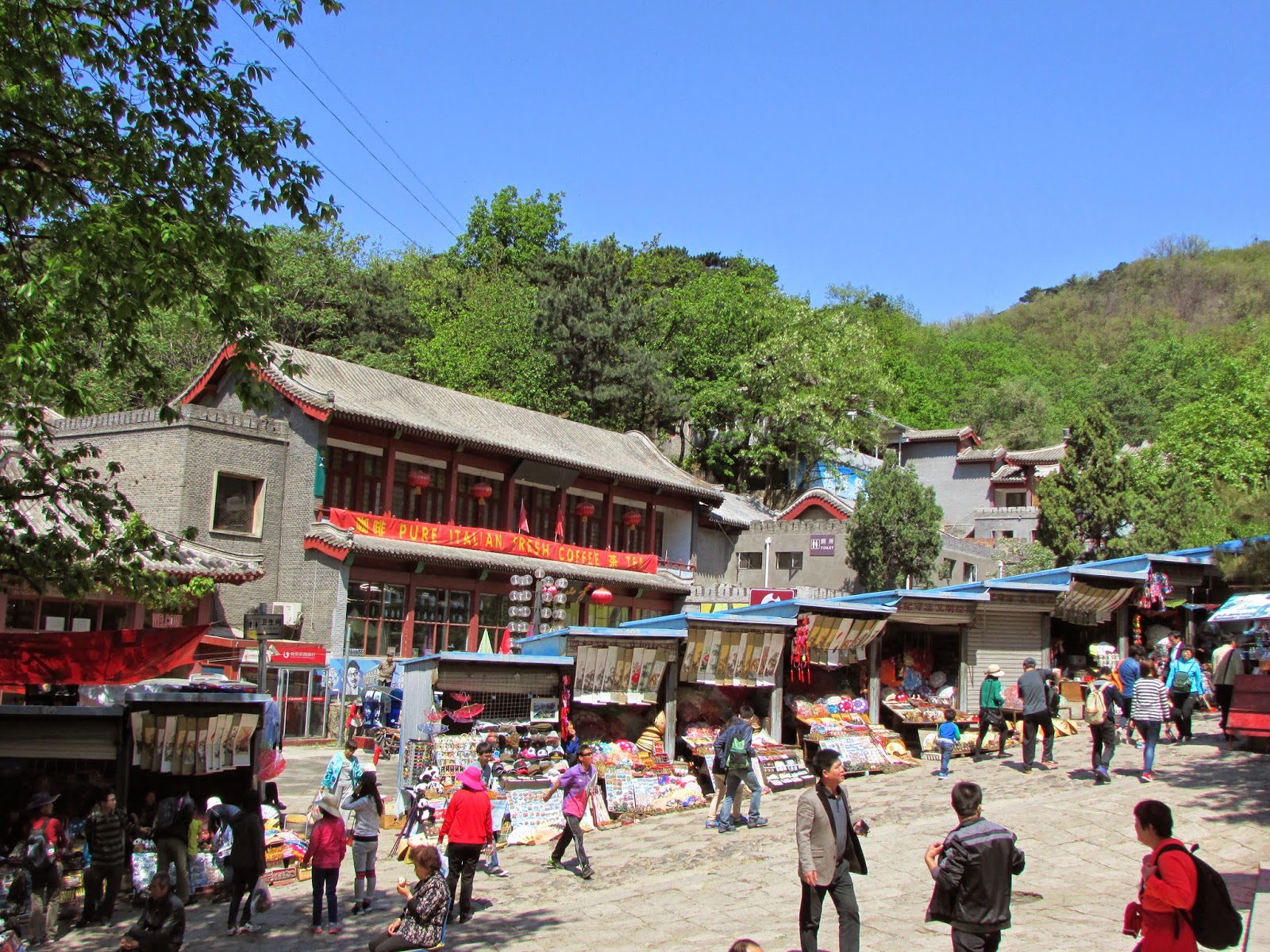 This was the only time this weekend that the crowds really caused any pain, as traffic was horrible and the drive took almost 3 hours. Once we arrived, however, the wall was surprisingly uncrowded. 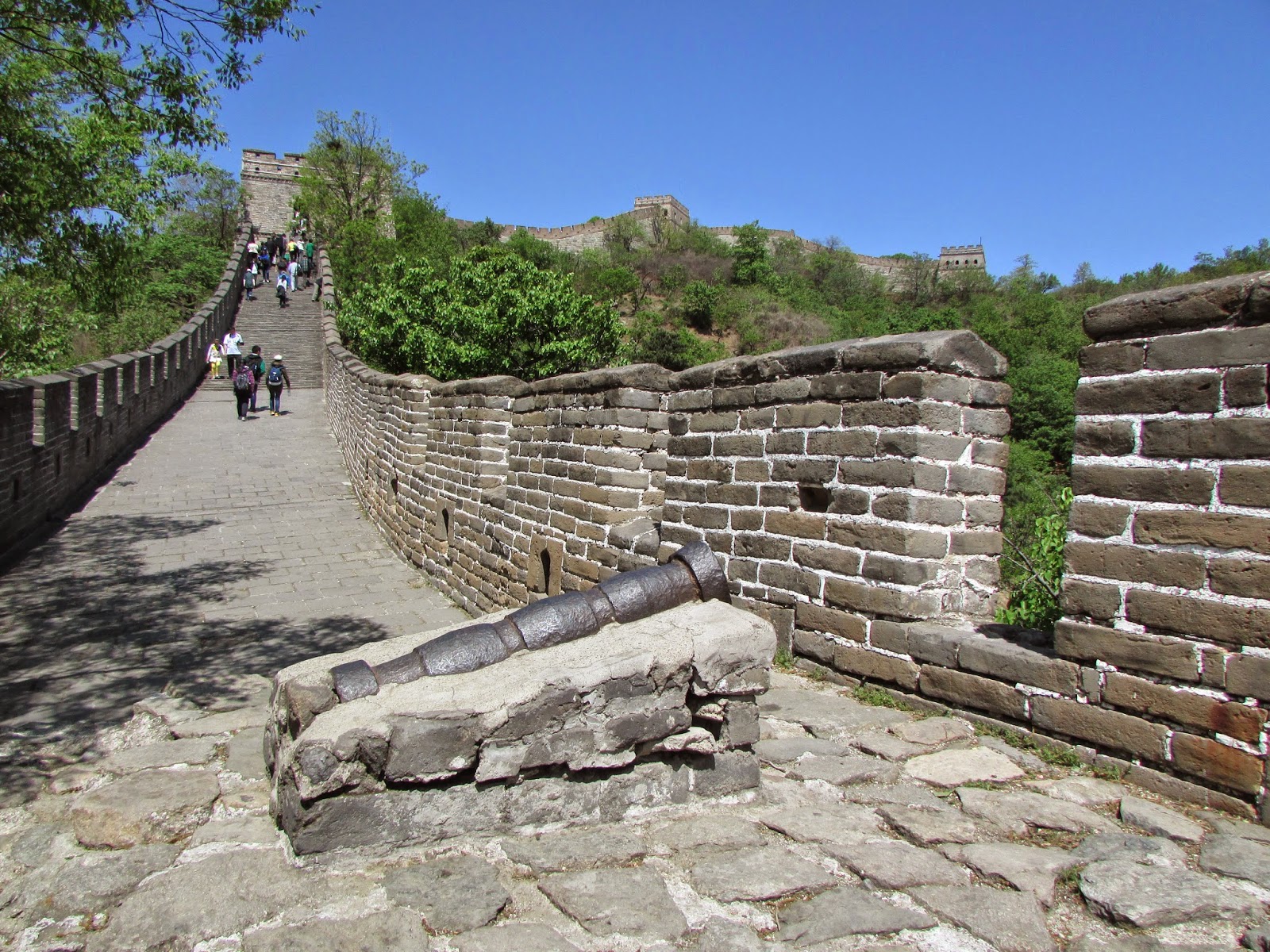 We chose to take the chair lift up the mountain and the toboggan ride down (there is also a cable car option, but who could resist the toboggan?). It was so nice to enjoy the breeze after being stuck in the car and what a view! 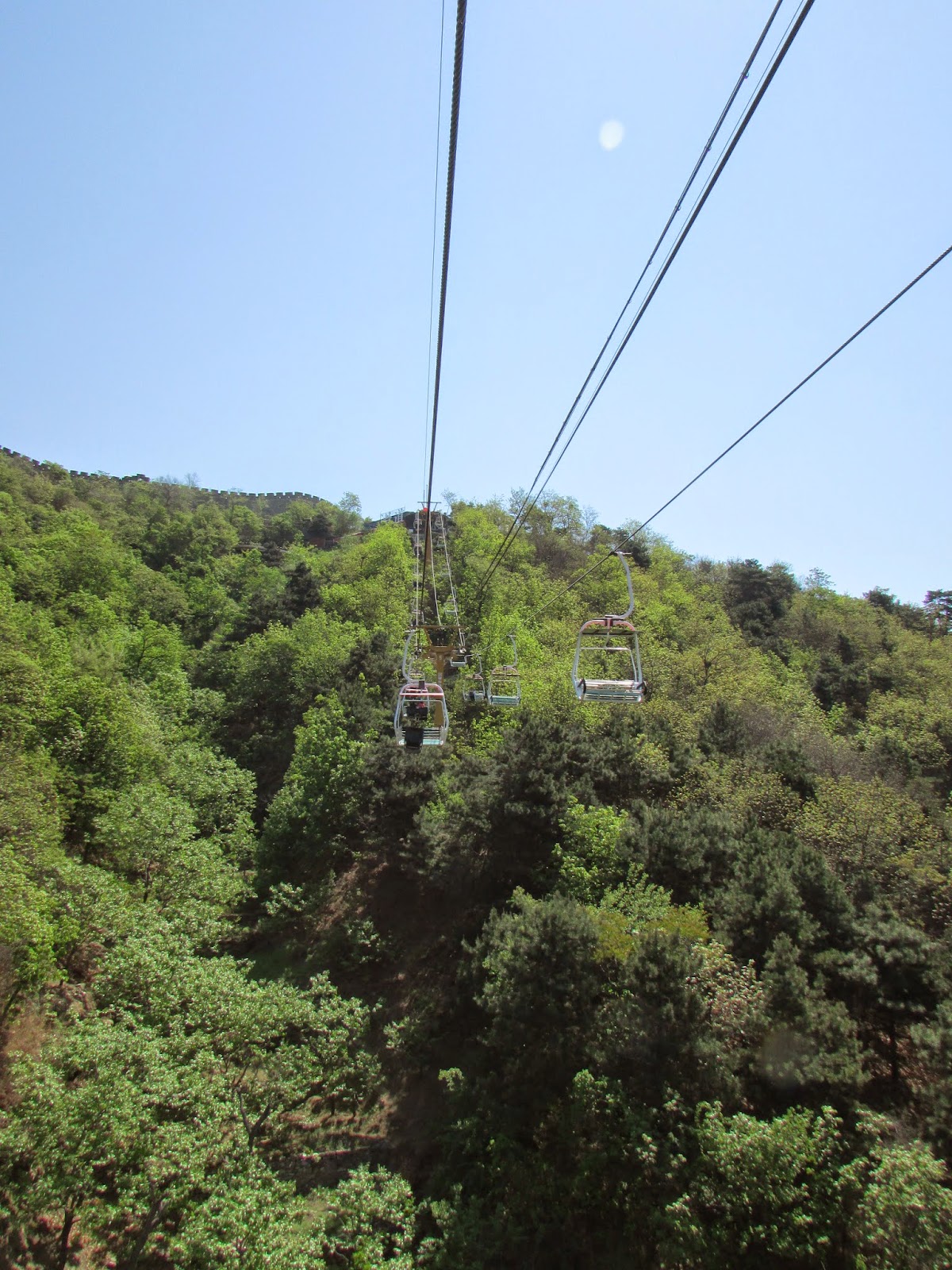 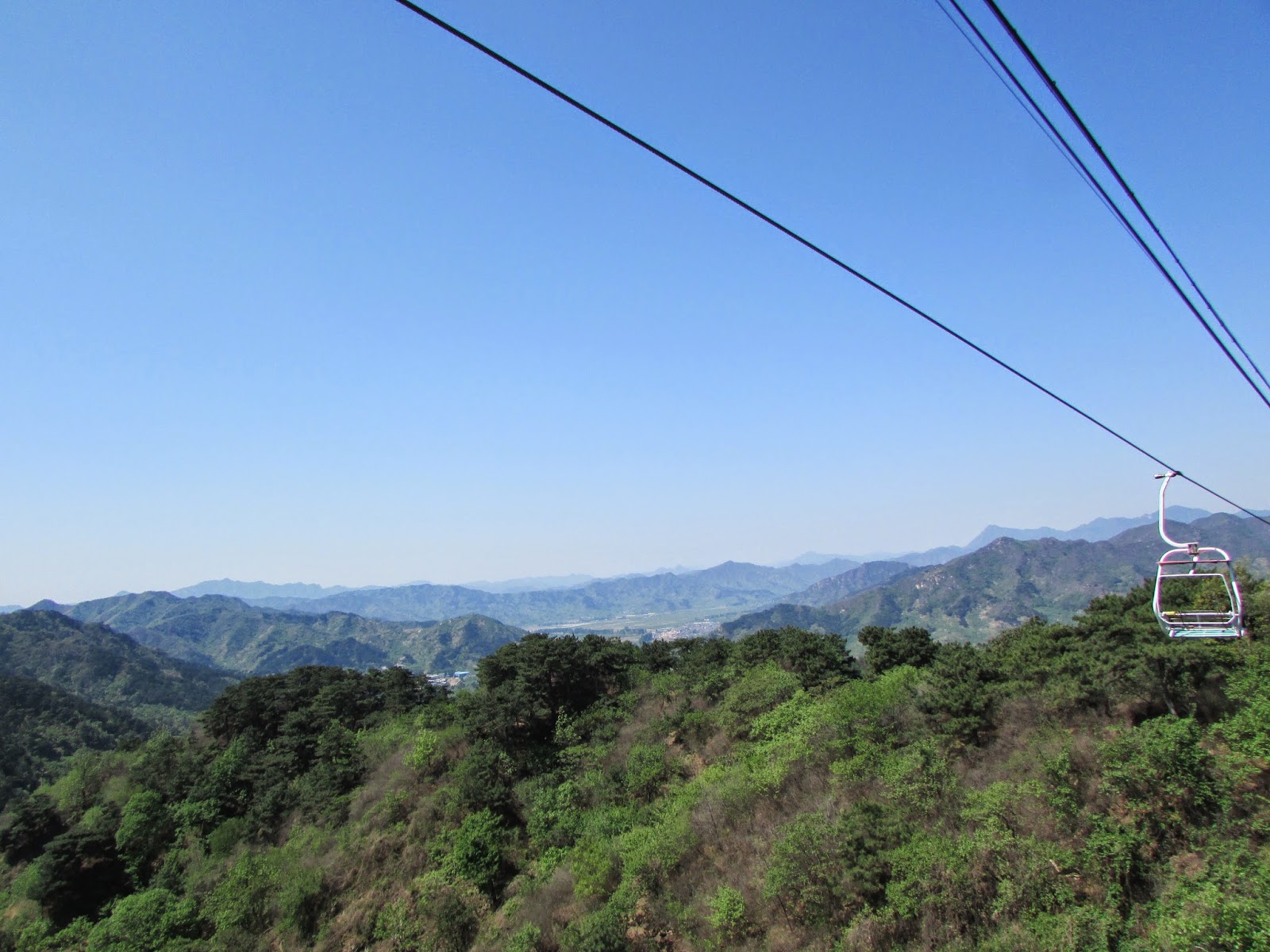 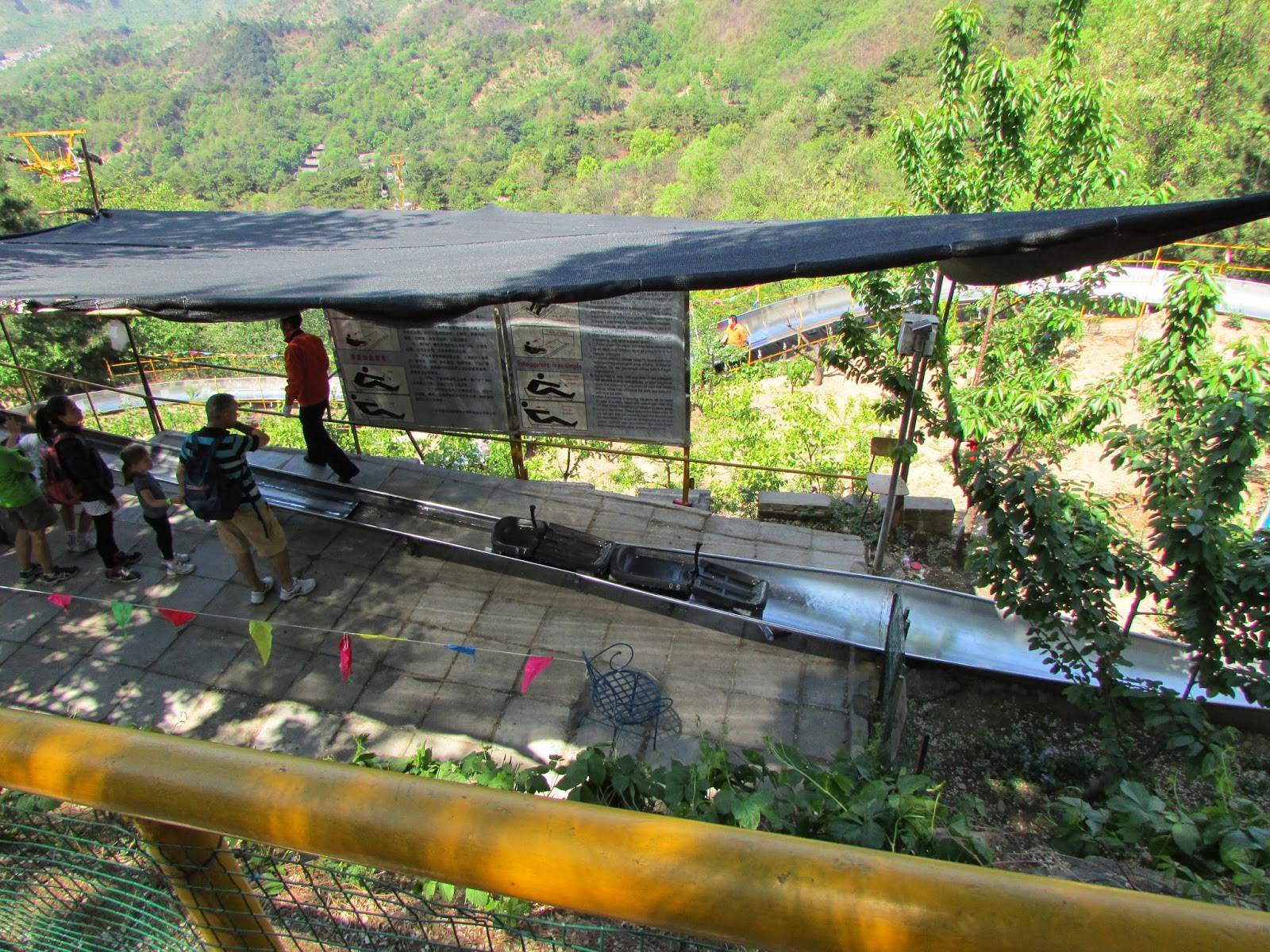 We had the most gorgeous sunny day for hiking...and the wall provides plenty of exercise as it winds along the mountains and you climb the stairs and cobblestone hills up and down. 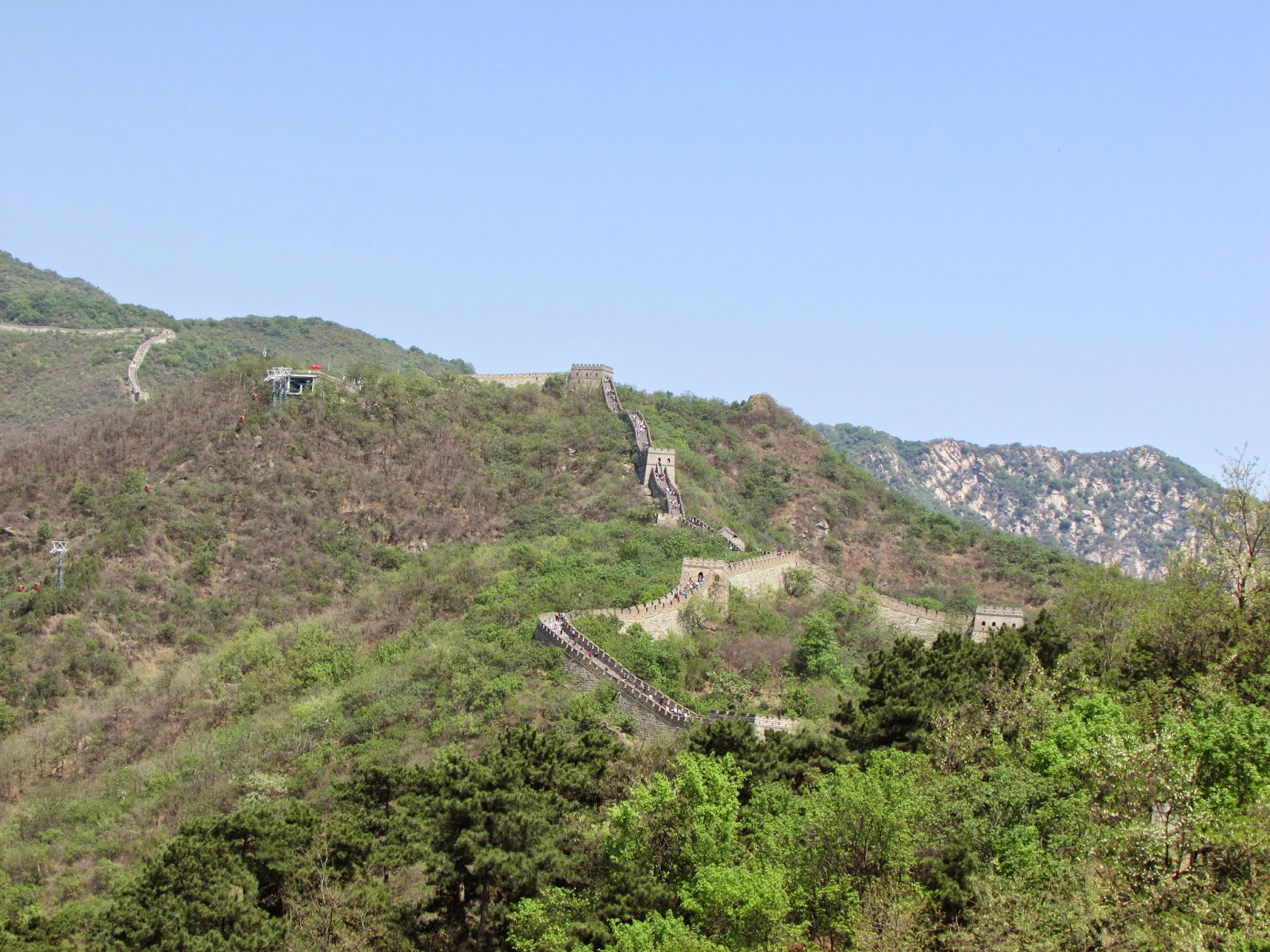 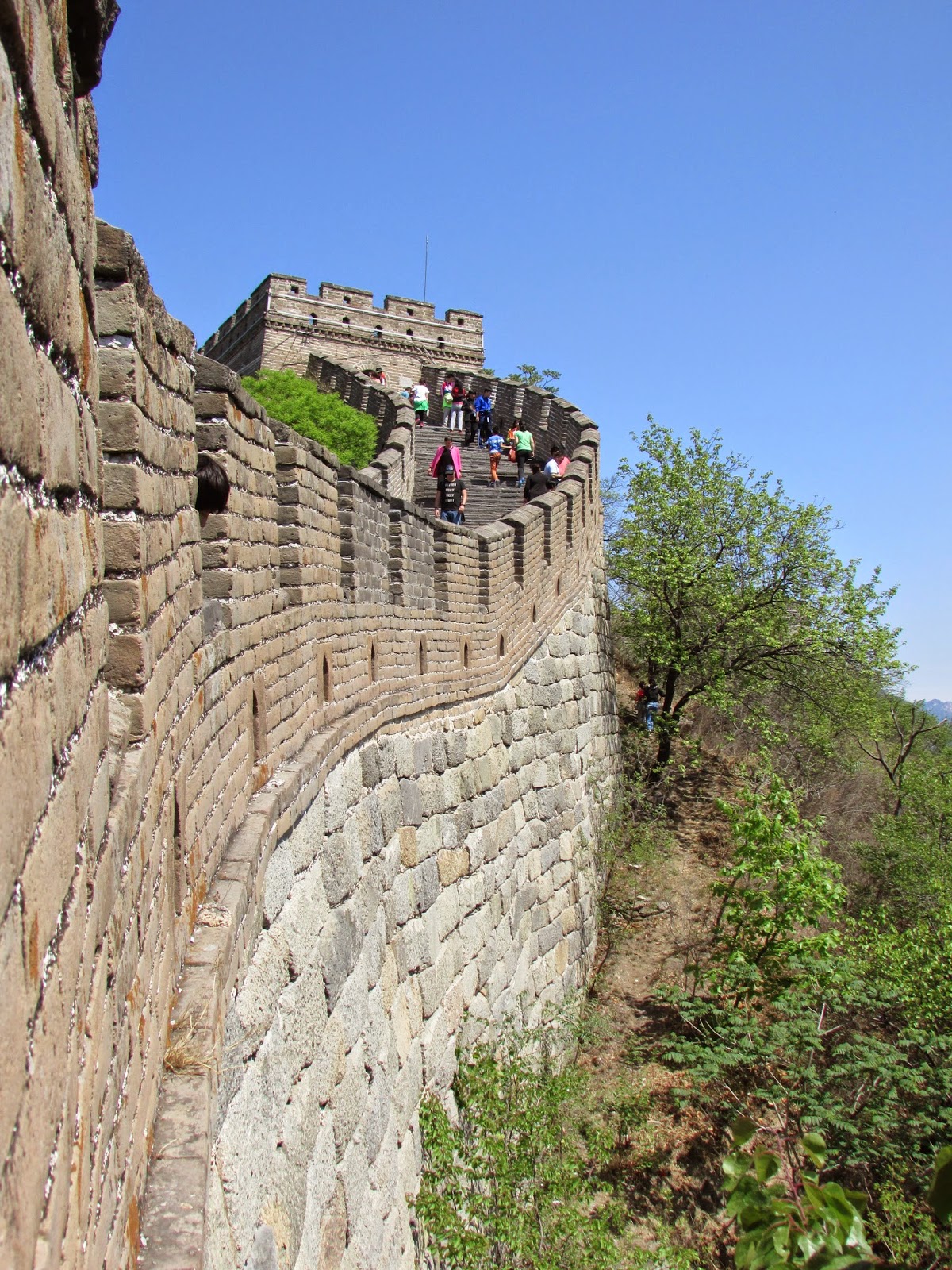 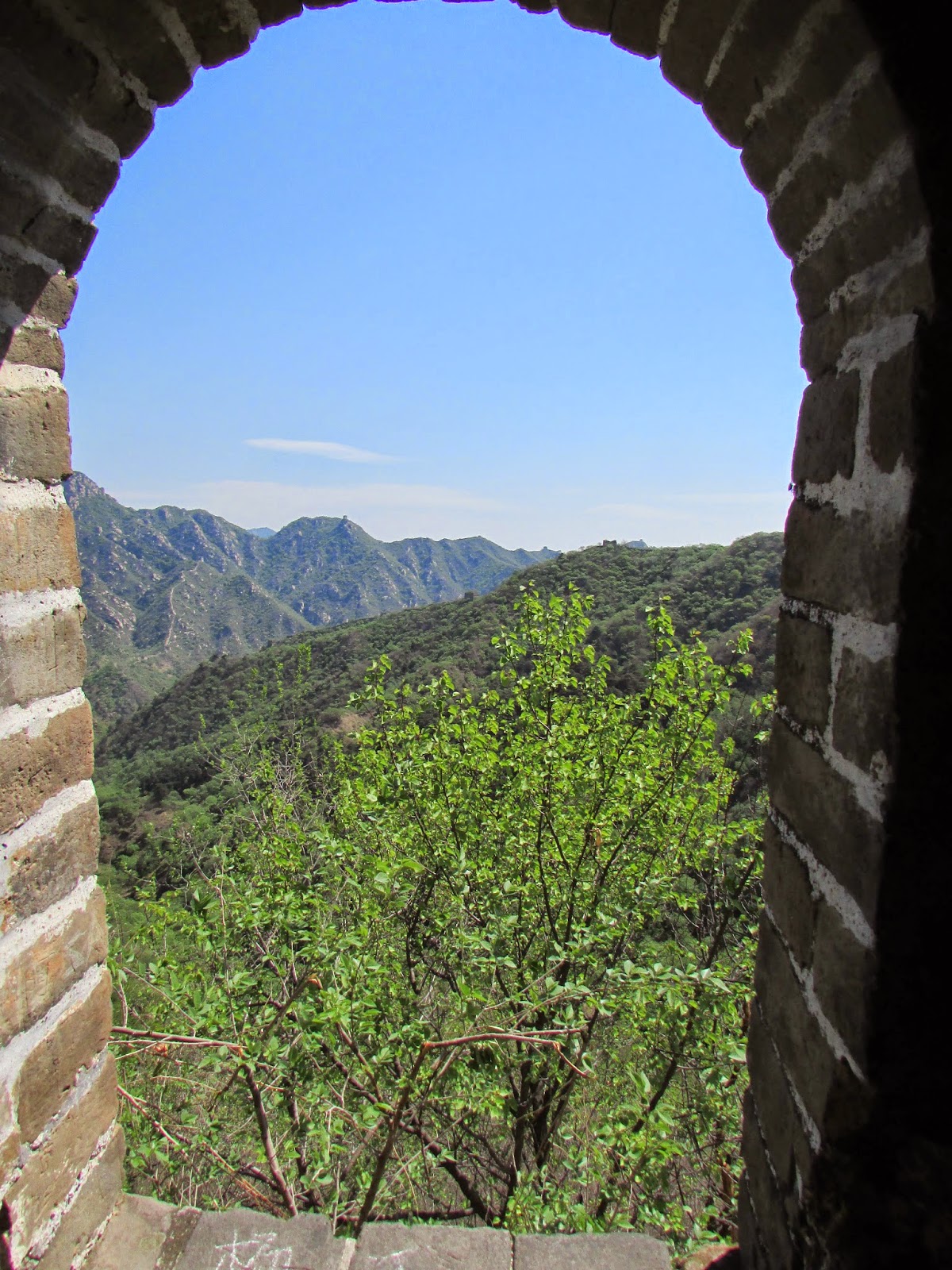 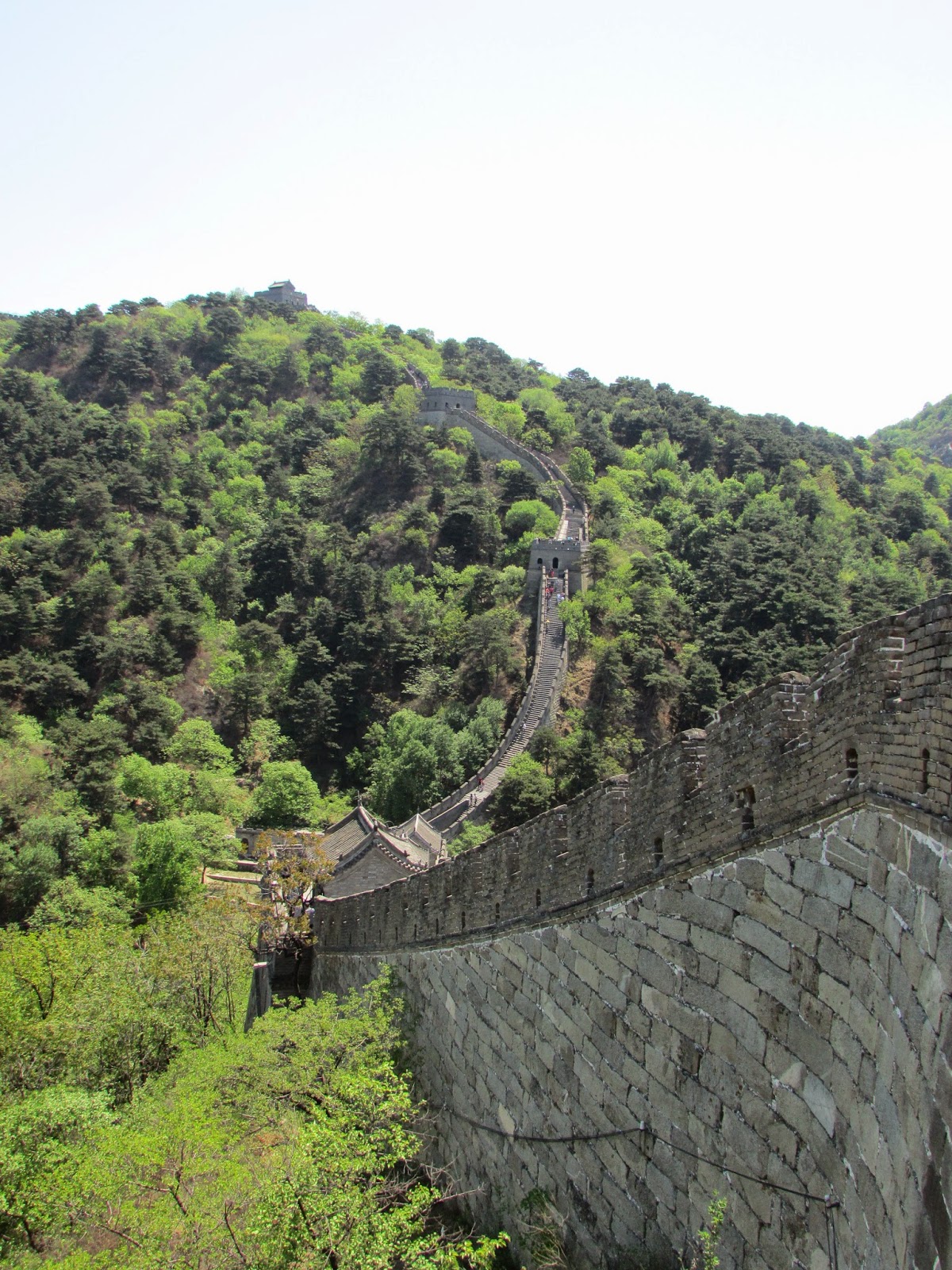 Just be sure to follow the rules of the toboggan (meaning you are not "a drinker", "mother to be" or have a "mental disease" or "permanent disability have difficulty getting about, old, weak") and you're sure to have a great ride! Since we have not driven cars in a while, this was our chance to reveal our driving personalities again...one of us got told to slow down several times, while the other created a traffic jam. 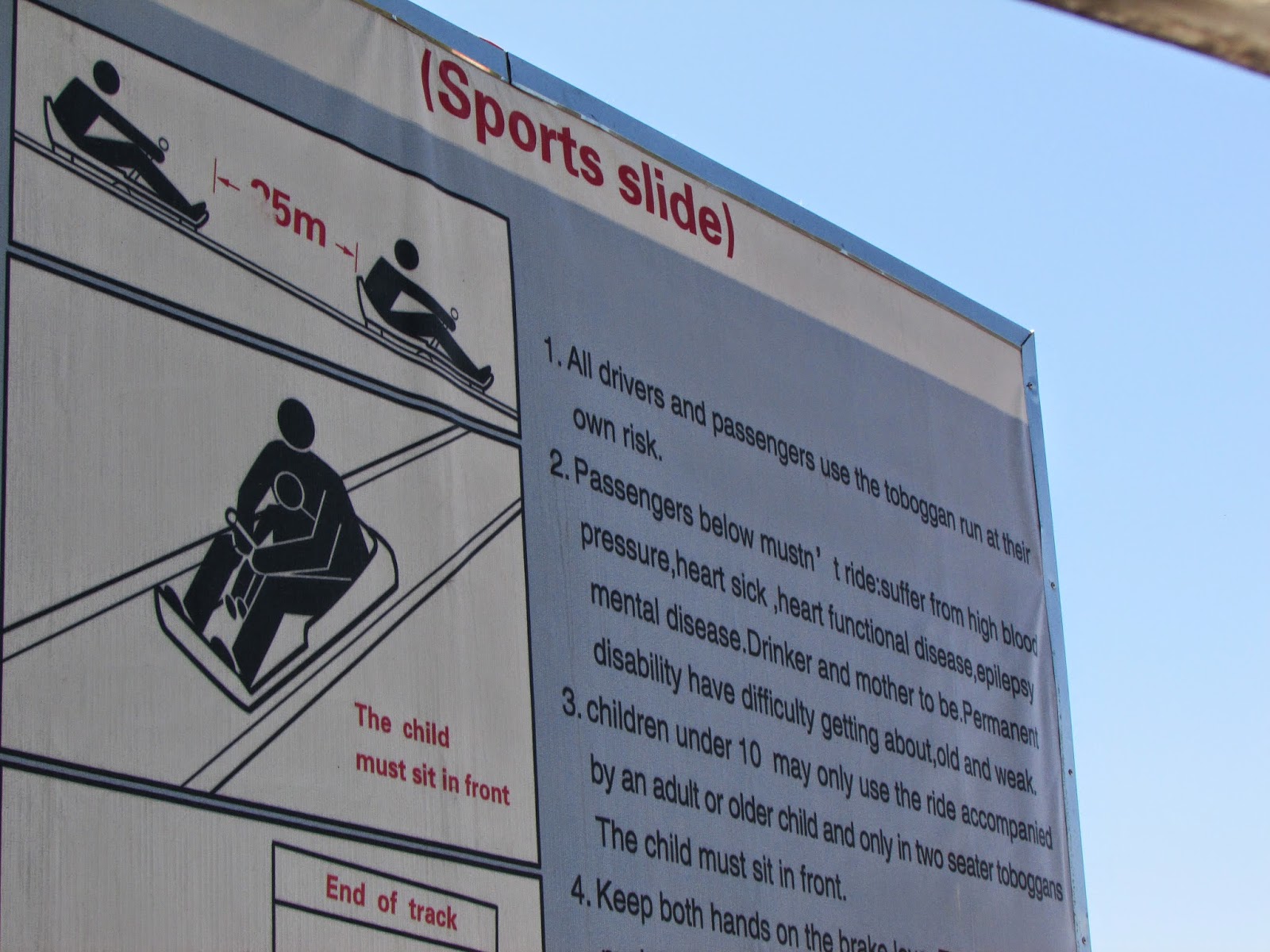 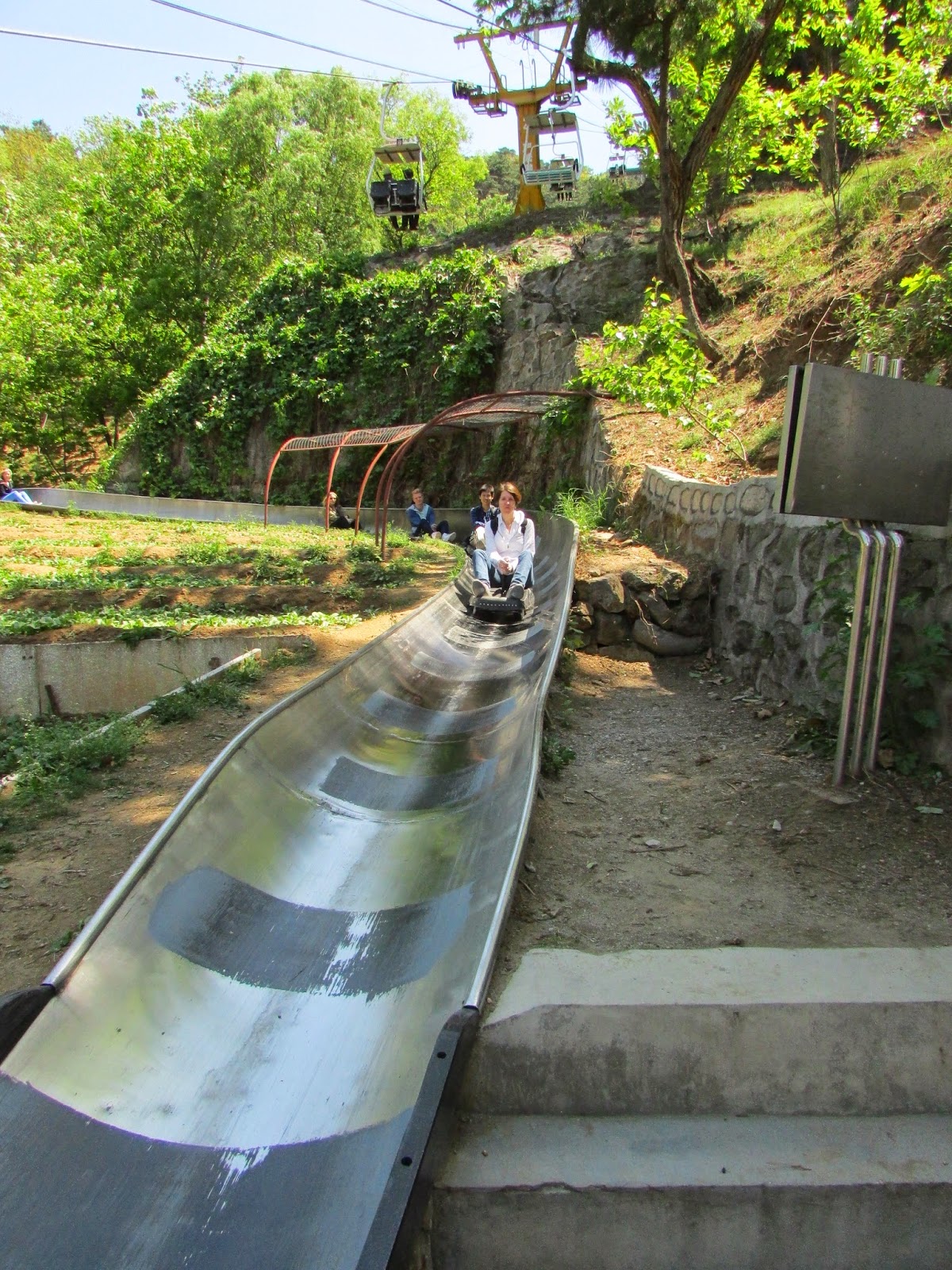 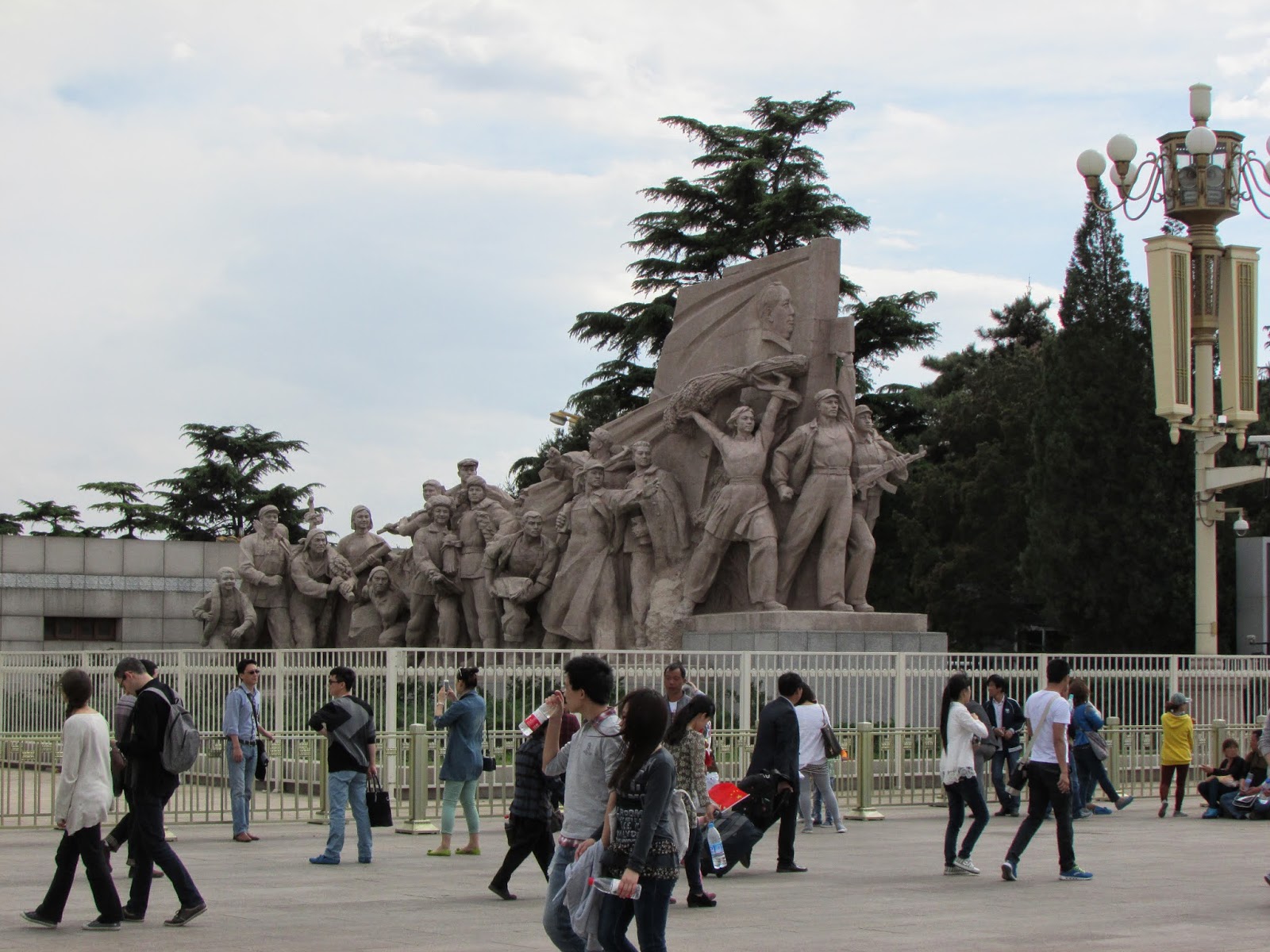 There's not a lot to see within the Forbidden City beyond the enormity of the whole thing, so visiting later in the day actually worked to our favor as we were the last group in and crowds had mostly dispersed. Our guide shared some of the history of the emperors, empresses, and many concubines, servants and staff who lived in this well-protected fortress. It brought me back to reading Empress Orchid by Anchee Min, which brought to life many facets of intrigue within the Forbidden City. 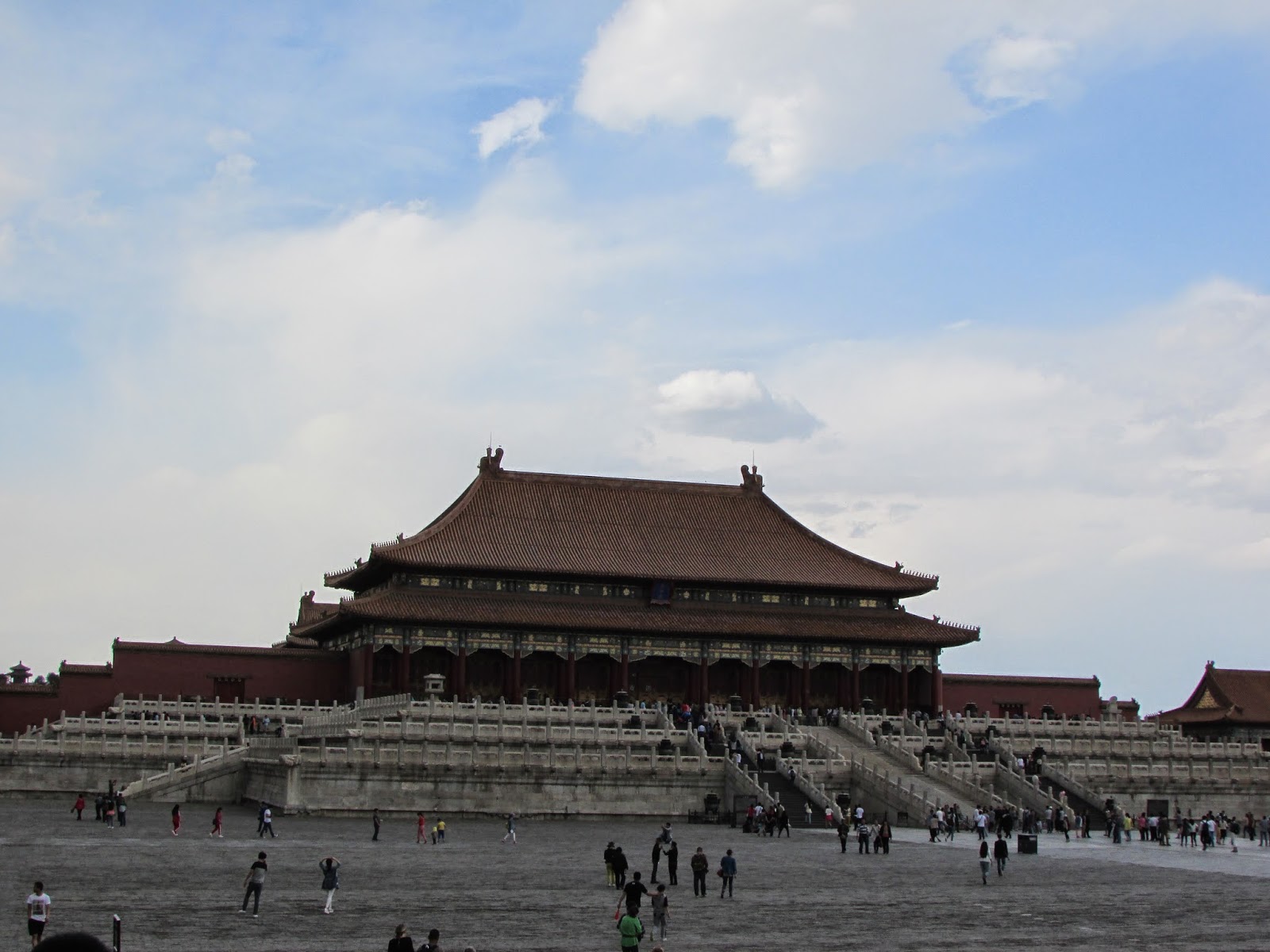 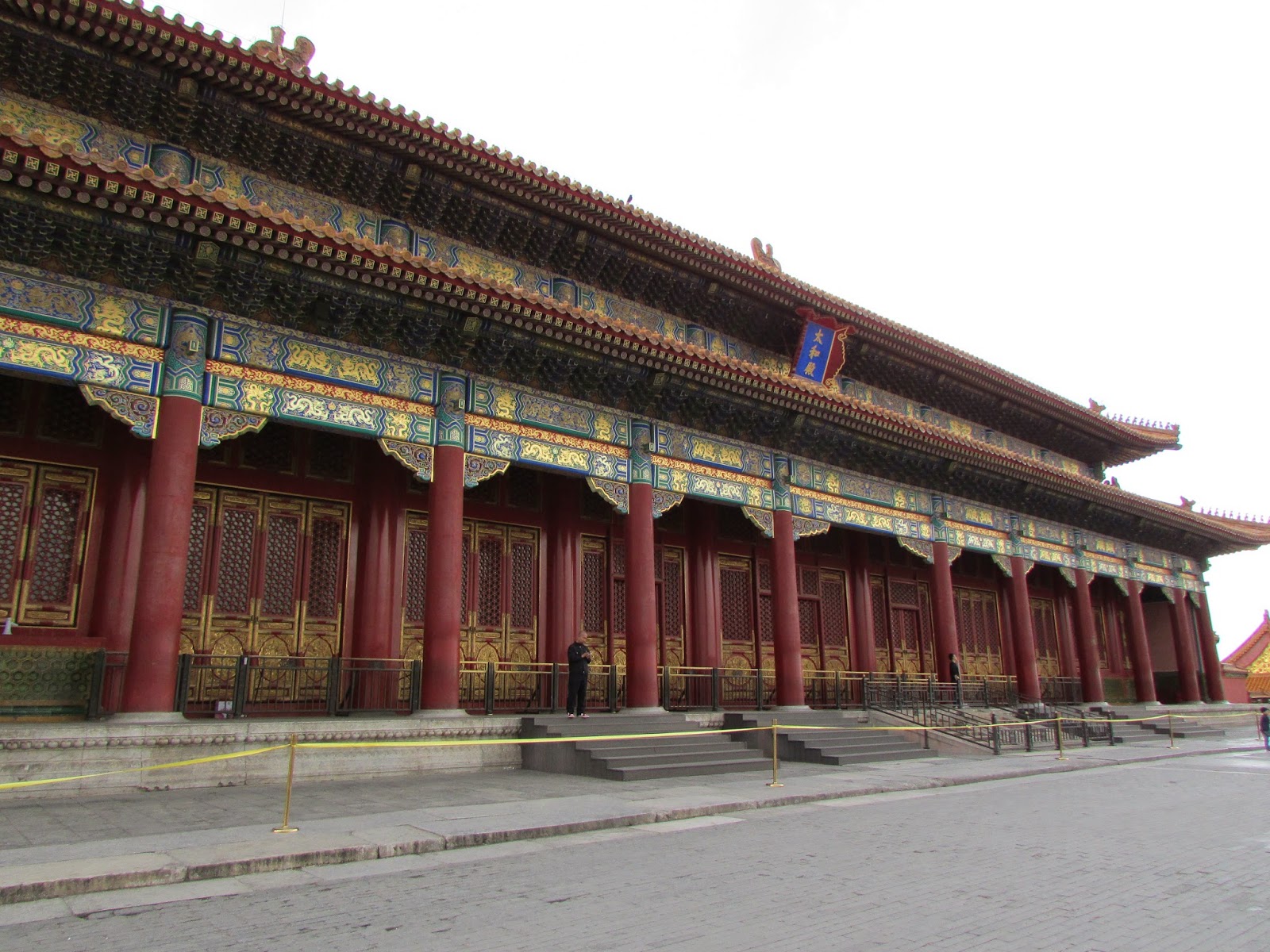 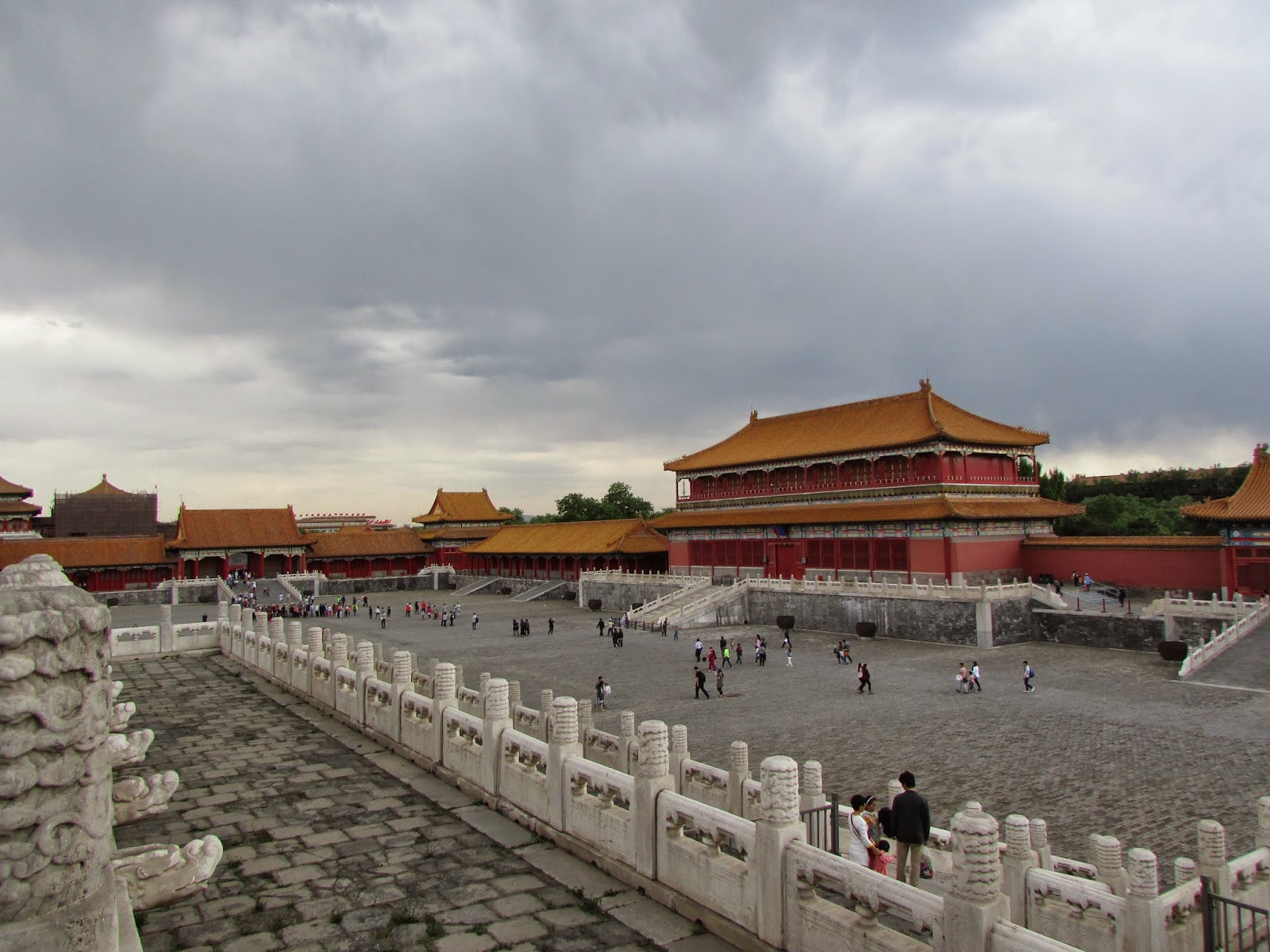 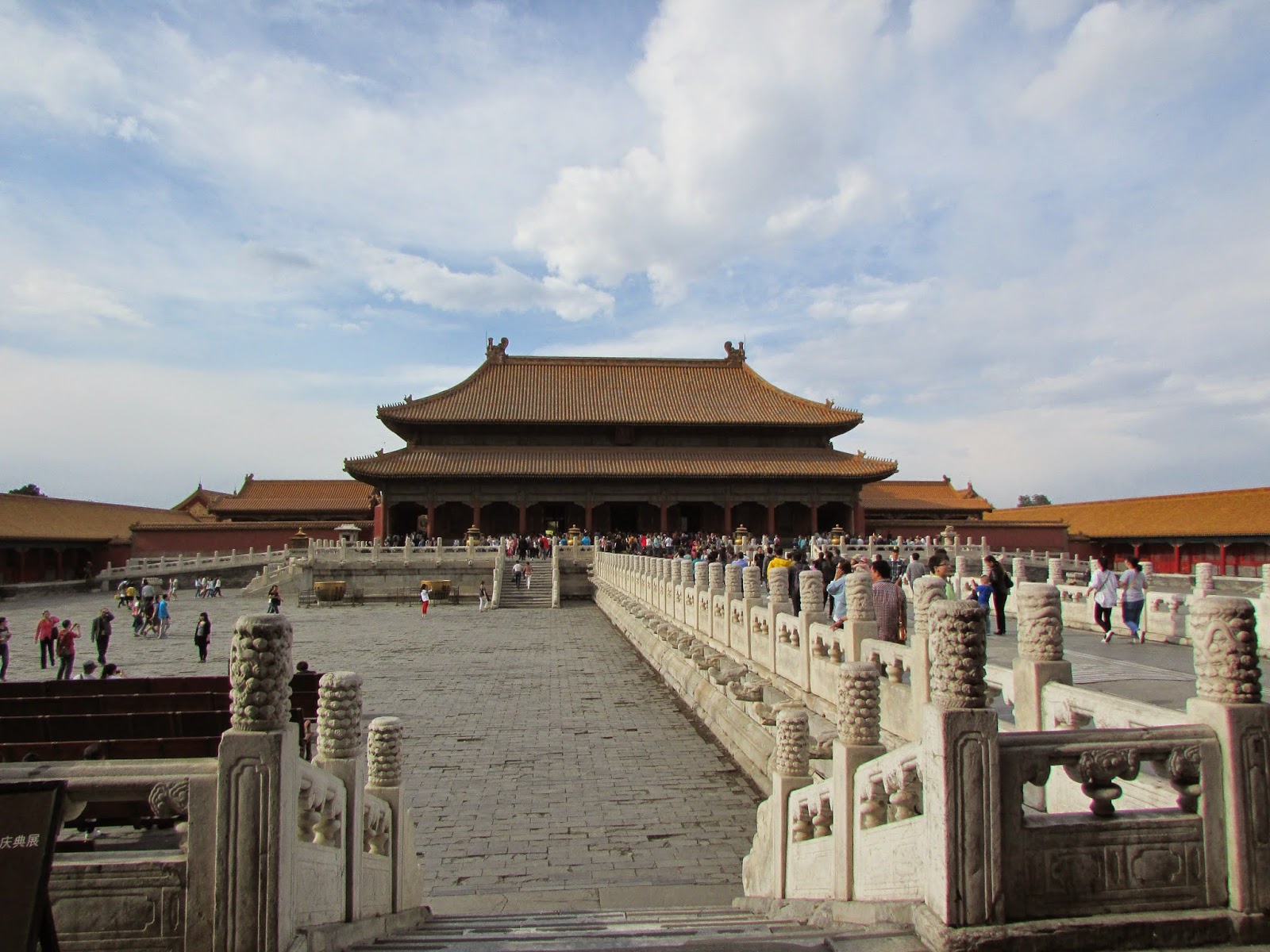 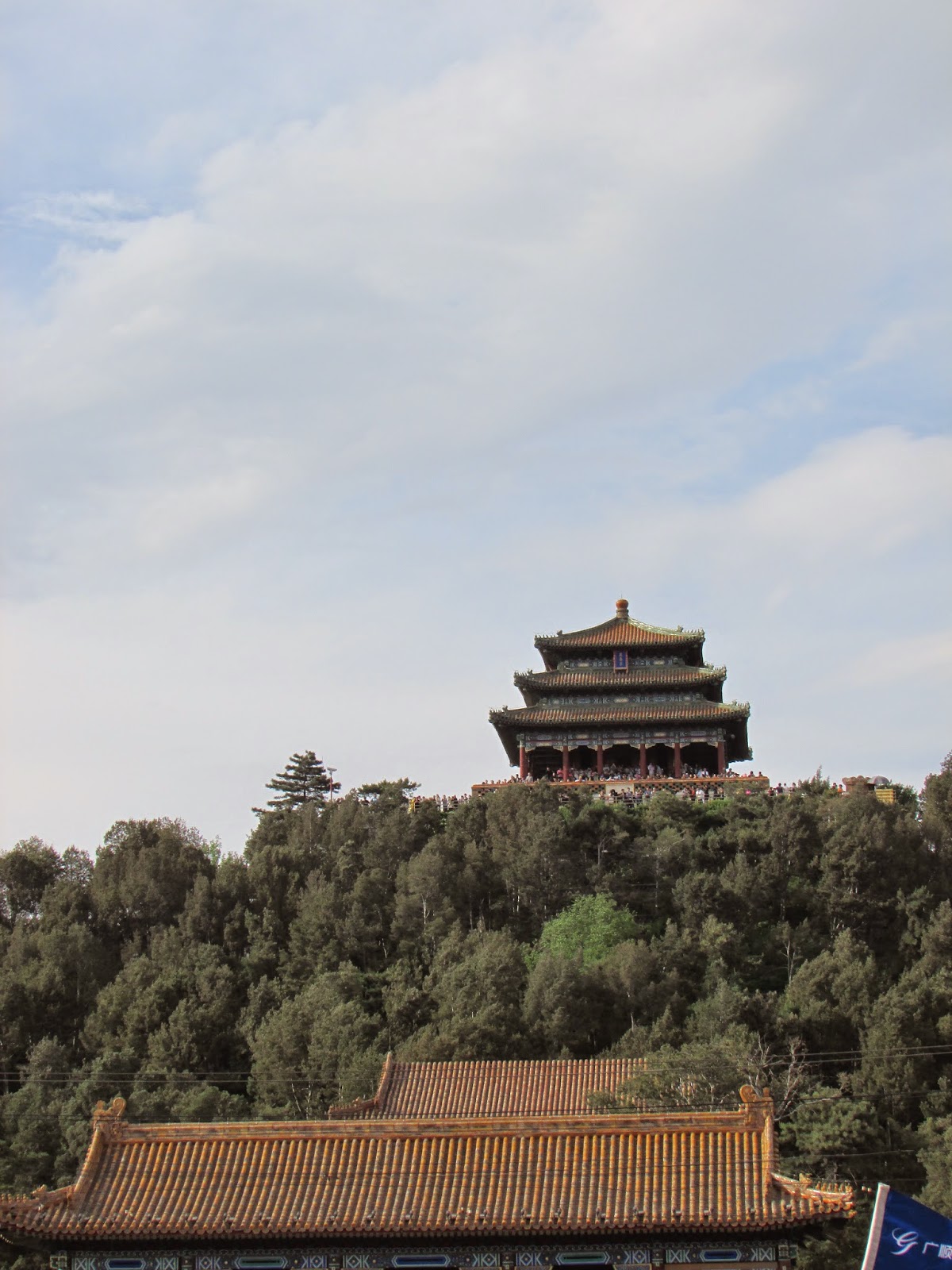 On our last day, we took some time to walk from our hotel towards Tiananmen and stroll inside some of the preserved hutongs (P.S. some highly recommended reading on this subject: The Last Days of Old Beijing by Michael Meyer). There's definitely a friendly rivalry between Beijing and Shanghai and a certain snobbery among residents of each toward the other. The comparison to Washington, D.C. versus NYC is quite apt. Shanghai is a cosmopolitan, fast paced atmosphere jam packed with skyscrapers while Beijing really feels like the capital city, with low-rise buildings spread out over a lot of space and a real sense of being the seat of government and much important history. We also got the sense of a much more enforced orderliness, where it seems like more of the tarnish and quirkiness breaks through in Shanghai (or maybe just in my neighborhood).
Posted by Samie at 4:08 AM