Beyond the DMZ tour, our trip to Seoul was mostly filled with more lighthearted, fun activities. Our apartment location gave us great access to the Hongdae area around Hongjik University so we had tons of restaurants, bars, shops and people watching nearby. We started the trip off right with some Korean BBQ (and for me, some spicy kimchi and tteokbokki).

We were also lucky to be able to join some friends (Mr. Twowhotravel's former work colleagues) for an evening out. They showed us great hospitality with a more well-informed (read: tastier) version of Korean BBQ and a visit to a Korean Jamaican/Reggae bar owned by the friend's brother. It is always great to be able to talk to locals and see things through their eyes a bit.

We had also scheduled a Korean baseball game, which was definitely one of the highlights despite getting rained out. We debated just getting tickets ourselves, but in doing research on activities we'd spotted a great food tour company and decided to combine activities since they offered a food and baseball tour. We met up with Daniel Gray, owner of O'ngo Food Tours, at our metro station, for our private tour. Our first stop was an area not far from the stadium for some dinner. Since we'd had plenty of opportunities thus far for Korean BBQ, Daniel steered us to something different. The first option was potentially too spicy, so we landed on a great chicken soup spot. The broth is actually patented and there were pictures of news features on the soup throughout the restaurant. It's hard to describe except to say it was worth a patent. The co-owner showed us the process (including mixing up your dipping sauce, spice level up to you) and we dug in to the ultimate comfort food. Even better, they added my new favorite (non-spicy this time) tteokbokki to the broth at the end. 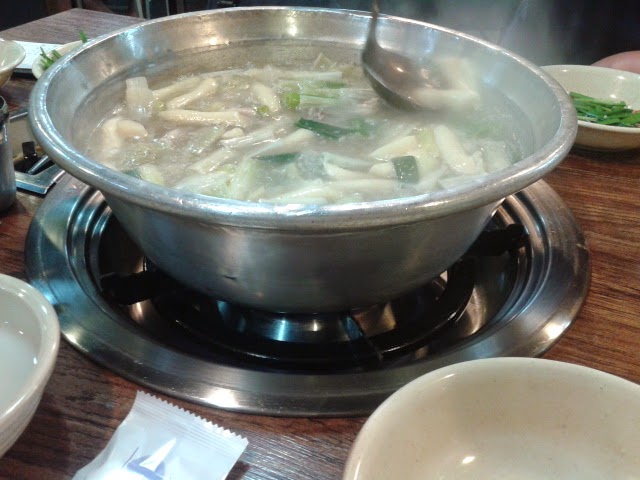 We waited out some rain (so we thought) in the restaurant and then headed to the game. Our host bought us some traditional game snacks outside the park: dried squid and beer plus sochu (the popular drink combo here...not my favorite thing, but it does seem to match well with the spicy, meaty food). 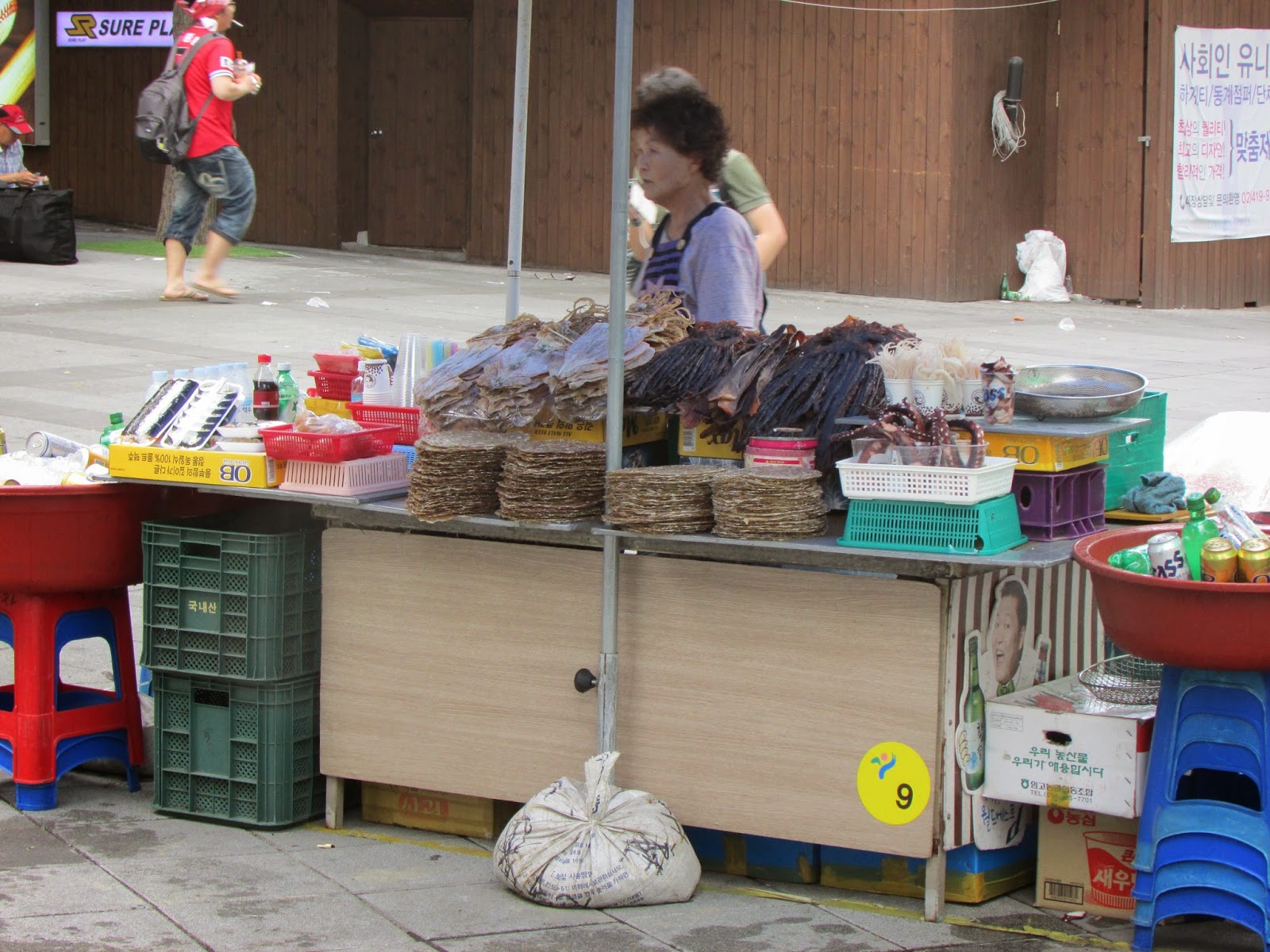 The game was so much fun, with each side enthusiastically cheering coordinated cheers for their players. Almost everyone wore team gear and each side's dancers also had all kinds of great routines (and new accessories for each). 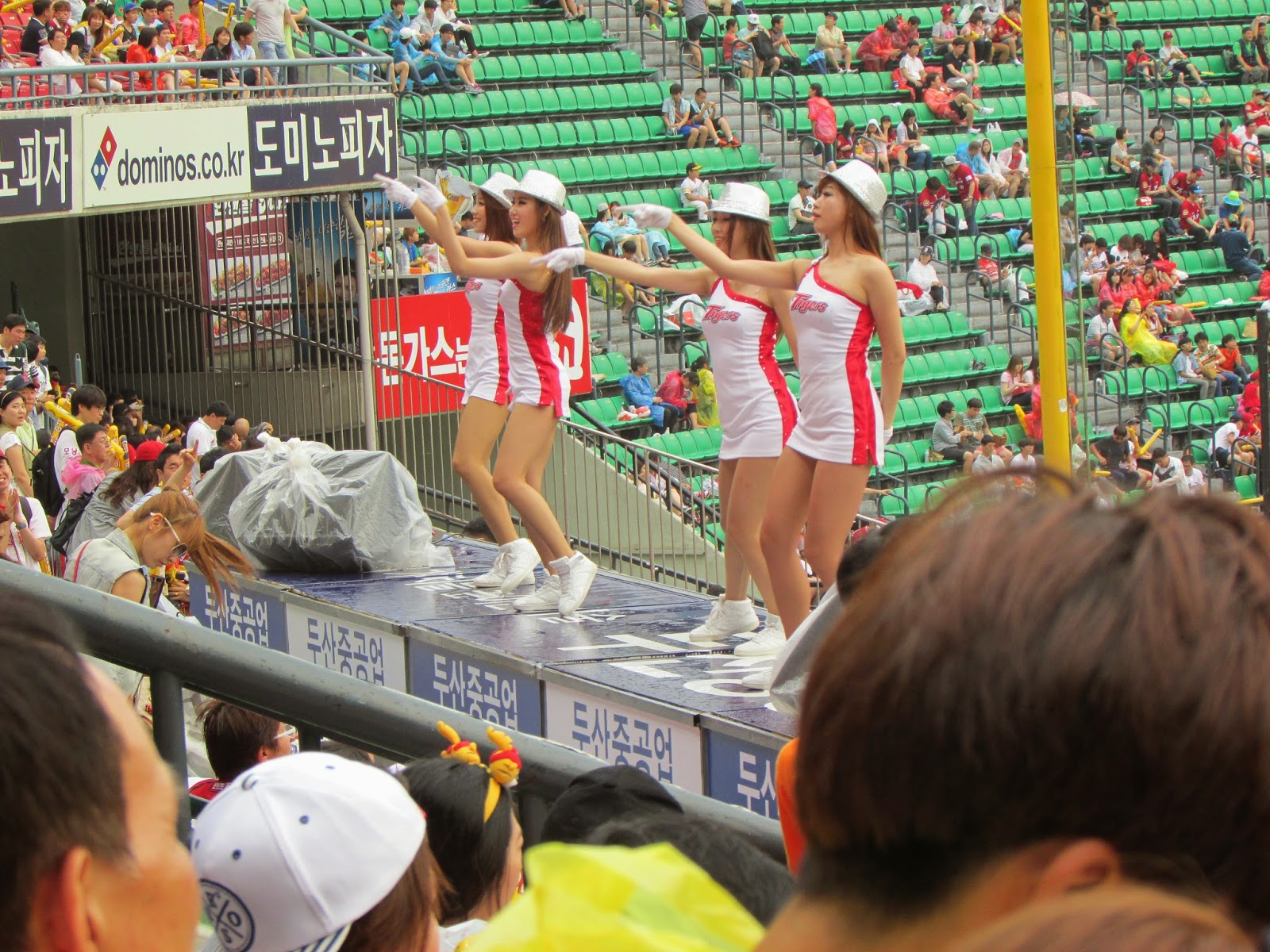 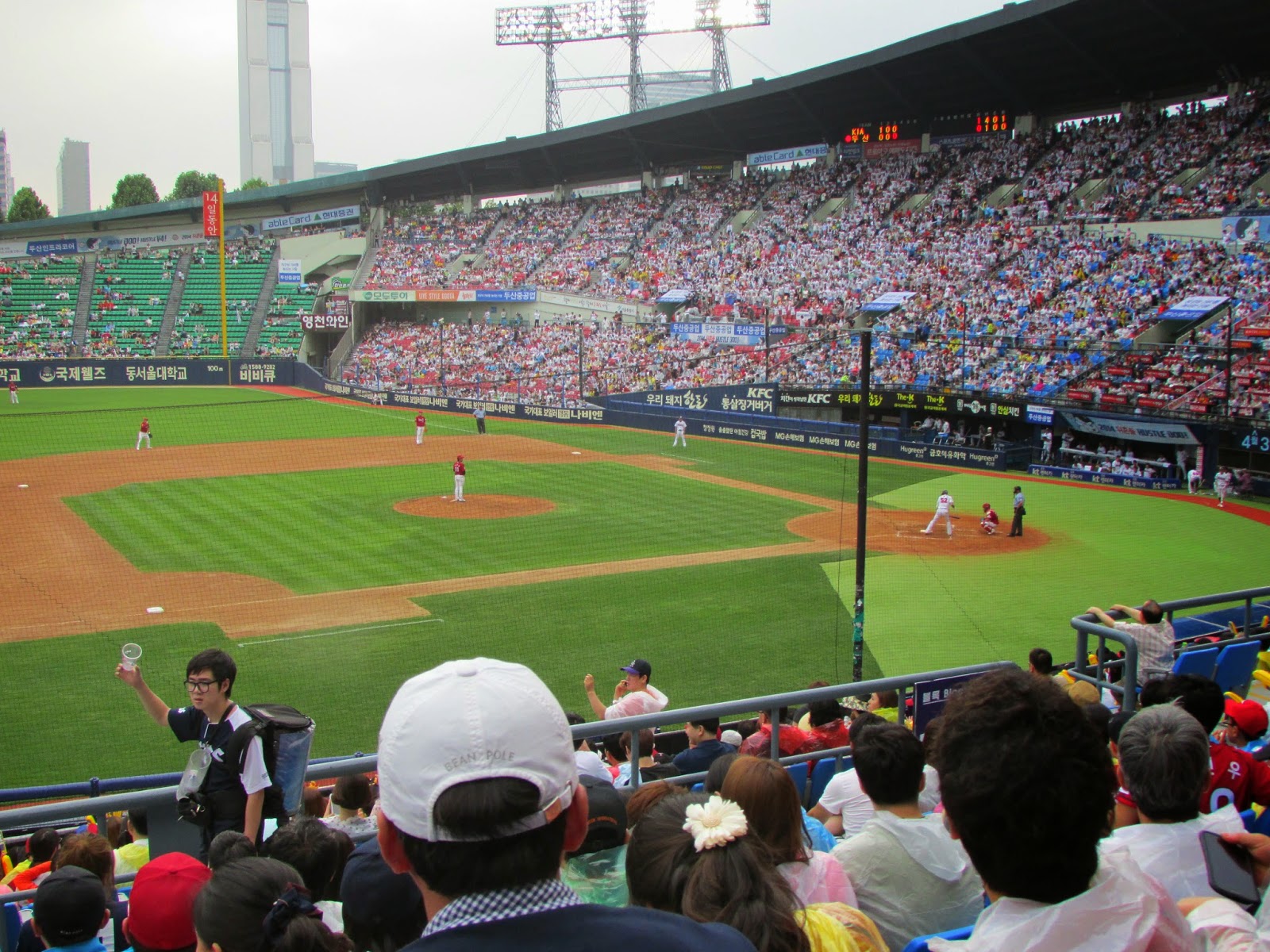 Unfortunately, after only a few innings, the true deluge began. Our host assured us "they never cancel the game" but when the TVs inside were showing waterfalls in the seats and a lake on the field, we guessed this would be an exception. Our host consoled us with some Korean fried chicken (a trend that has hit Shanghai big time, apparently related to popular Korean TV shows). This particular specialty was topped with a massive pile of garlic. I think next time I need to ease in to all the delicious Korean food a bit more slowly. It was great fun talking to Daniel and learning about his business and personal path to what he is doing today.

The next day we made a visit to the Gyeongbokgung Palace. 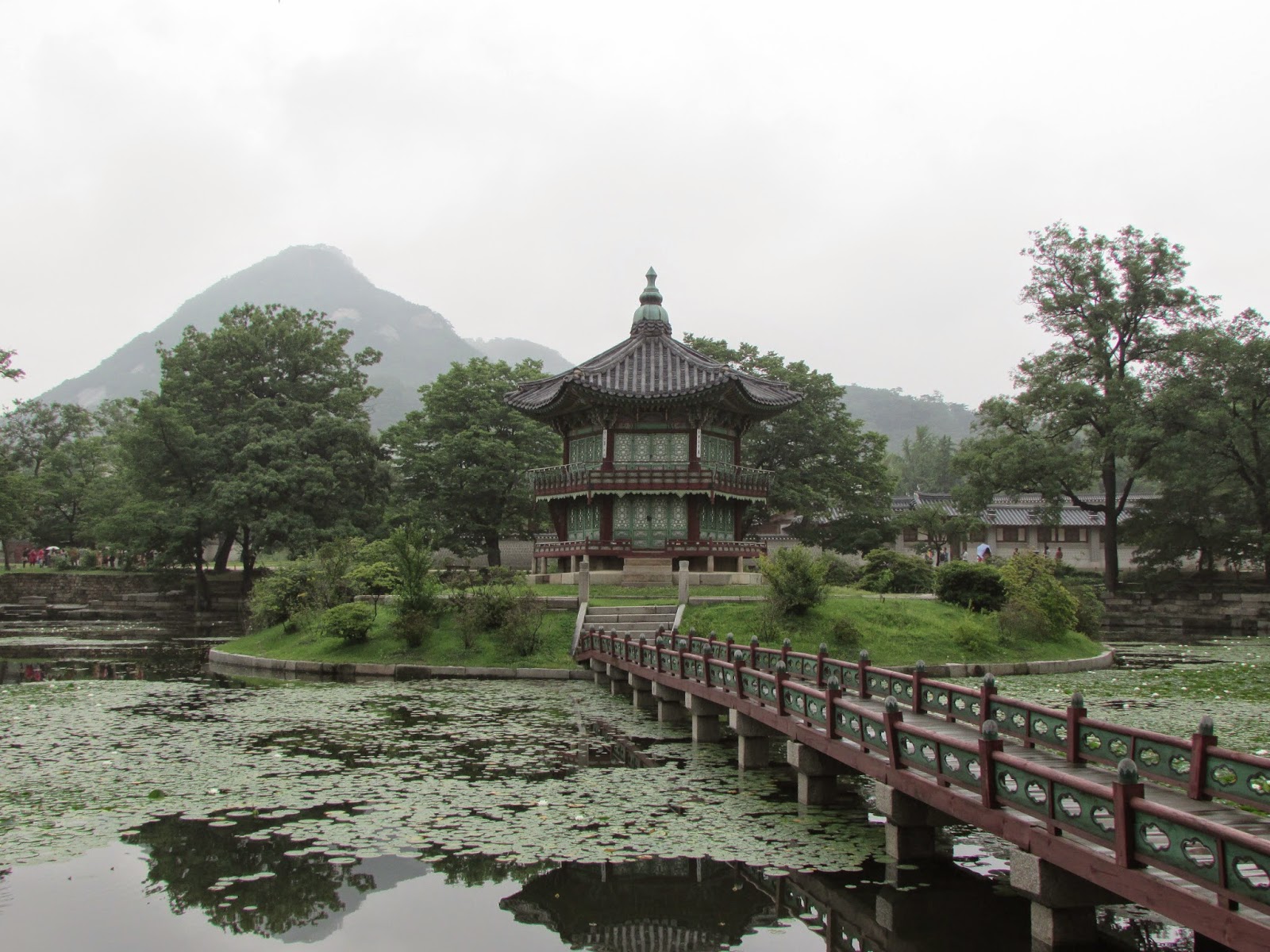 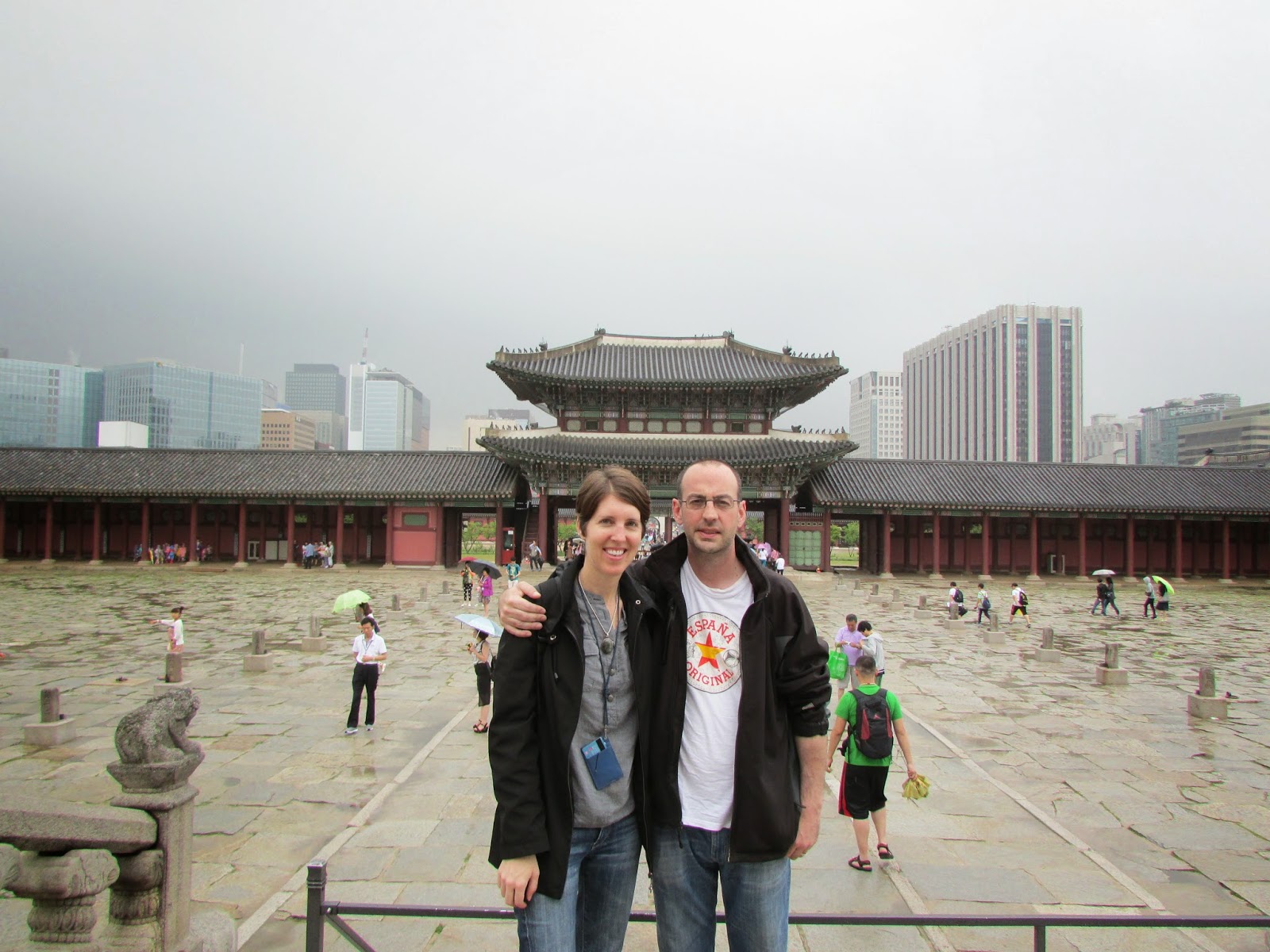 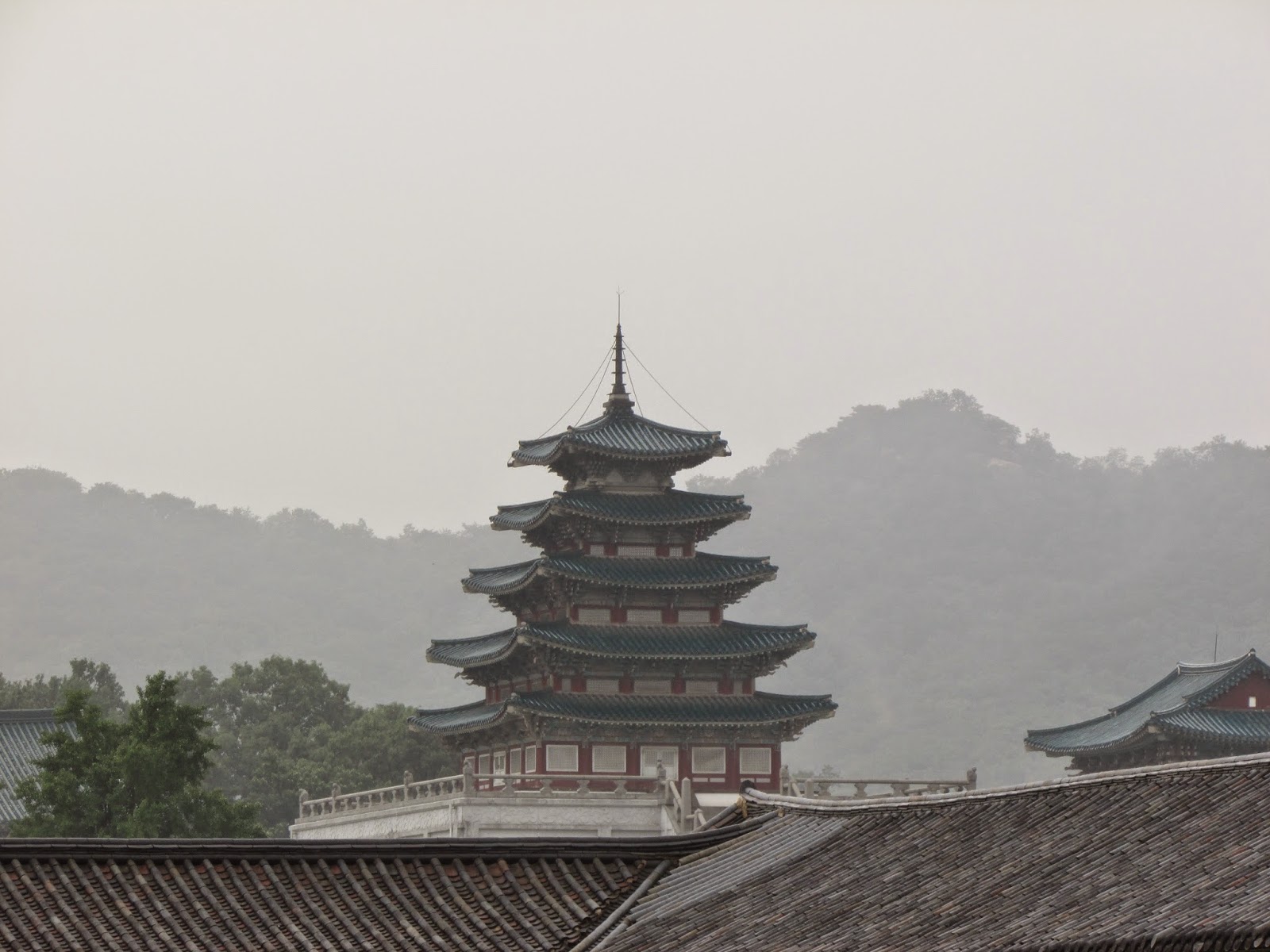 On the way back, we visited Bukchon Hanok Village, which is situated between the two major palaces. This is an area of preserved traditional homes. Like most rapidly progressing Asian cities, many of these had been torn down as people moved towards high-rise living. But, recent efforts have helped to preserve this area and make it a tourist destination as well. I'd love to spend more time wandering the narrow streets on a less rainy day some time. We ducked in from the rain for lunch at a great little place called Pan Steak.

Korea was a wonderful surprise. So far, this has been true of almost everywhere we have gone in Asia. We are constantly impressed by these great gems. Seoul also has wonderful nature surrounding it, with mountains and easy hiking access right on the metro. Another place I'd love more time to explore (or even settle down for a bit)!
Posted by Samie at 8:06 AM