What could be more fun than making merry with a bunch of makeshift "Santas" throughout the city--spreading wonder, joy and amazement while having a general great time?  We thought it sounded like a pretty good time when we heard about it online and decided it was a fun way to spend a Saturday afternoon.  After spending a heavy morning reading the tragic news of the Newtown school shootings, Santa Con delivered some much needed joy and reinforcement of the good in the world.

Santa Con is a gathering of people dressed as Santa Claus, which apparently began in Copenhagen in 1974 and has spread throughout the world.  It is essentially a "Santa convention" that moves throughout the city, having a good time and spreading goodwill.  It is kind of a mix between a pub crawl, a parade and a city tour.  SantaCon now takes place in 275 locations in 37 countries.  We were surprised to learn this was Shanghai's first SantaCon.  SantaCon Shanghai was put together with help from Shanghai Pub Crawl, BEAN (a volunteer organization) and sponsors like Daily Secret Shanghai.  BEAN, which does great volunteer and charity works in Shanghai and brings together young professionals for events and networking as well, benefited from donations collected along the route.  Donations went to pay for diapers and supplies for orphans, and they also sold flasks to help fund operating costs.  Check out BEAN online for ways to contribute (there are BEAN organizations in many cities throughout the world too).

After receiving the loose schedule online (the location and route is kept somewhat secret up until the day or so before the event), we arrived in the Former French Concession to find a group of Santas loitering on the corner near a Lawson's, fueling up on Santa Con juice (beer and wine coolers for some, water for others). 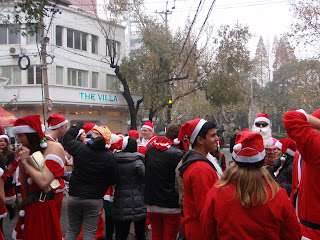 Other Santas gathered at a nearby bar, The Camel, playing pool and enjoying some Santa juice and food for the long journey ahead. 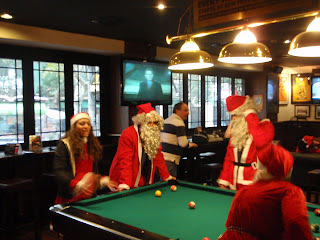 The group quickly became the curiosity of the neighborhood, and the first of many photos were taken.  After experiencing the curious onlookers (and resulting traffic jam) at the Halloween party we attended in Shanghai, we had anticipated and looked forward to being a source of wonder to the locals.  I'm sure SantaCon attracts attention anywhere, but the pure curiosity and joy of the people in China at such sights makes it especially fun. 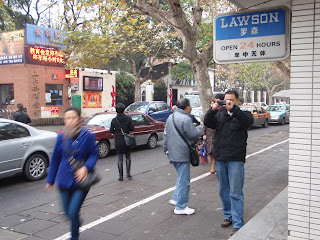 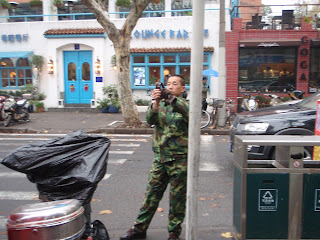 Eventually, the group gathered and got a little introduction about the festivities, took a few photos and began our march. 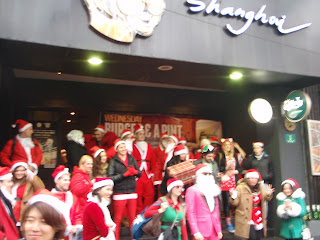 Our group made its way over to Yongkang Lu, a great little street of cafes and bars.  It was a drizzly, cold day but overall not a bad one for a SantaCon--no downpours or extreme cold, and we had Santa hats and beards (and spandex suits or hot pink tuxes, depending on your interpretation of Santa style) to keep us warm.
The locals' curiosity built and we began attracting onlookers.  Bryan and I delighted a little boy with a camera by posing for his first photo and then giving him one of the lollipops we brought along to give out on the route.  I especially enjoyed watching the little old ladies grasping arms and giggling walking down the street.  I imagined the phone calls going out from the apartments over the street, "You have to come see these goofy Laowais (foreigners) dressed up as Santa.  Crazy!  Come take pictures!". 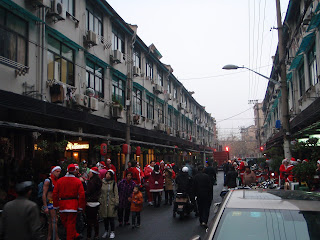 A little boy, who I nicknamed Waldo, became the local star as he came along in his Santa hat, Christmas sweater and eyeball glasses and joined in the crowd.  His family enjoyed watching him have fun and take part in many photo opps. 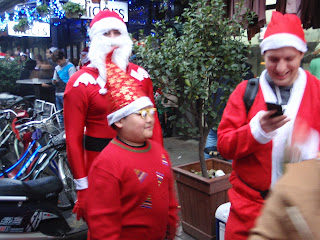 We had mostly traditional renditions of Santa, along with a few "girl" Santas in dresses, an elf, and one guy in a skimpy cheerleader-like belly baring outfit (brr!).  While hanging out on Yongkang Lu, a biker covered in stickers joined us.  I don't really know what it was all about, but he was big on giving hugs (maybe to keep warm) and seemed to be in the spirit, if not in the proper costume. 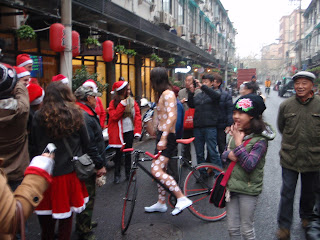 We enjoyed a spot at the Handle Bar watching the action in the streets, and then grabbed a couple of slider sandwiches at Sliders to fuel up for the rest of the journey.  Of course we had to snap the obligatory "wherever you go" shot of the ubiquitous Yankees hat (may be a little hard to see in this photo)... 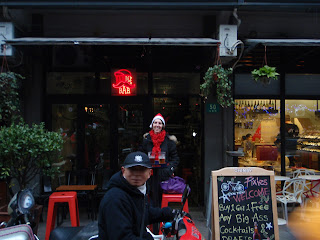 Next, the group walked to the Metro and gathered on the platform to catch the train together because of course Santas must stick together on the same sleigh.  We sung various carols as we rode to our next destination. 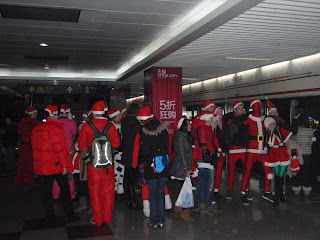 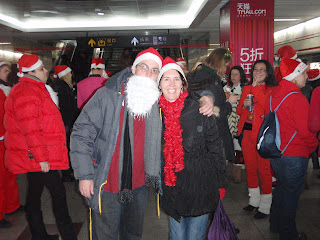 We arrived at People's Square metro and had some politically incorrect photo opps with the statues. 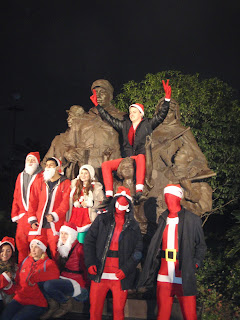 We proceeded to East Nanjing pedestrian road--one of my least favorite (touristy, crowded, constant hawkers) places in Shanghai, but which is a lot more fun at night with a large group of Santas! We stopped for a great photo opp by the tree (sponsored, of course, by the Galaxy Note II). 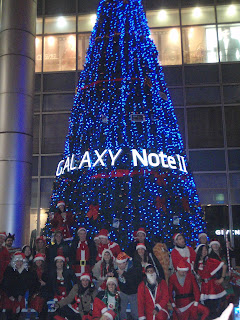 We even had our minute of fame, gathering on a small stage and dancing and singing along to some tunes.
There were various photo opp stops along the way, as we continued to be the objects of fascination and we delighted in spreading joy by posing with many, many people who were thrilled to have their photo taken with one or more of us.  We gave joy through photos, candy handouts and simply by existing.  It really was a refreshing way to spend the evening after such a sad start to the day.  As a few beggars approached, we had no change to give but handed them each one of our lollipops.  The reaction was amusing, as of course it was not what they were hoping for, but yet they smiled and were thankful.  Bryan gave a lollipop to a little grandmother who was walking with her family and you would have thought he handed her a winning lottery ticket.  She smiled widely and thanked him and all of the family joined in the thanks and joy.  This occurred over and over with children as well, though a couple children and parents were a bit shy/unsure about the whole thing.

We made our way up to The Bund.  Normally, this would have been the best photo opp, but the Shanghai smog was at its finest.  However, we took some group photos and then spent a lot of time giving out joy by posing with many Chinese people for them to snap pictures with us.  I wonder how many of these photos are traveling around the internet on Weibo or being messaged to friends ("Look at me with these goofy Laowais who were parading around as Santas.  I don't know if this is some kind of Laowai traditon?").  Bryan was asked by one group who spoke a bit of English if we were all friends.  "No, just strangers who got together and dressed as Santa for the night." and in reply, "Oh, so this was on the internet?"  They got it! 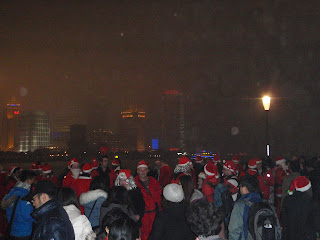 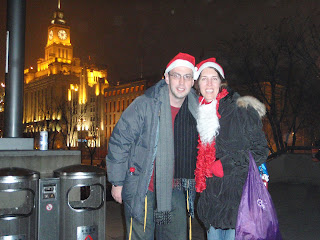 Our group rounded out the night at the South Bund/Cool Docks area, at Bubba's Texas BBQ (nothing says Christmas like BBQ and beer).  We jumped in taxis and cozied up inside with some food and drinks.  Many of the SantaCon participants continued the party with a Christmas Pub Crawl and loaded into a bus from Rico Rico.  We said goodbye at this point as we're not quite as young as the rest of the group (not that we couldn't have done it, we just have enough life experience to know Santas need rest!). 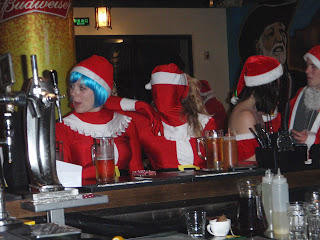 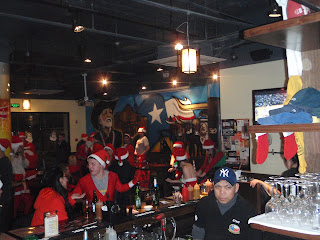 There may still be the opportunity to participate in a SantaCon this year in your area and I'd highly recommend it, especially if your Christmas spirit is lagging and your faith in humanity has been shaken.  If not, dress in something cheery and go spread some joy anyway!

Happy Holidays to everyone and let's all wish (and work towards) for peace and kindness in 2013!