We spent our first Christmas away from the U.S. this year.  Even with all our past travels, we have always been somewhere in the states in all the years past.  We certainly wondered with Christmas as expats in China would be like...

After returning to Shanghai in early December, the Christmas decorations began to appear.  We really didn't know what to expect, and perhaps we should not have been so surprised by the level of "festiveness".  While Christmas is not traditionally celebrated by most people here from a religious point-of-view (Wikipedia says about 4-5% of the population is Christian), the commercial side of things has certainly been embraced.

Everywhere we went, the store employees donned Santa hats atop their usual uniforms.  Christmas decorations filled the aisles of stores, trees popped up throughout town and a lot of businesses sported decorated windows. 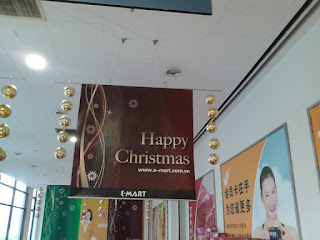 Our apartment building had not one, but two, Christmas trees in the lobby--including this one which we were invited to "make up". 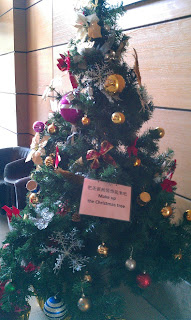 When I returned from my trip home, my unexpected Christmas gift was a festively decorated apartment.  After an attempt at "Holiday House" which turned out to be more "Christmas junk store", Ikea saved the day with some classy decorations to make our apartment sparkle. 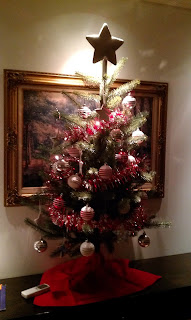 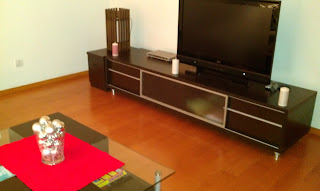 The Shanghainese people seemed to get in to the spirit in their own ways.  Our friendly apartment doorman (who mainly sits in the lobby smoking, but is also responsible for fetching the water jugs for residents' water machines--and he does keep a "discard battery" box at his desk, so I guess the duties are really quite diverse), flashed a big smile and wished us a "Merry Christmas!" (I'm being generous with the pronunciation, but let's be truthful it far exceeded my Chinese pronunciation) when he came to bring our new water on Christmas eve.  It was a nice change of pace from our usual exchange of "Ni hao" and gesturing.  We got greeted quite frequently with "Merry Christmas" all over town.  At the office, apparently there was a day of giving small gifts amongst all the Chinese colleagues and we saw several company parties out celebrating throughout the season.

I also got a lot of smiles when I wore my Santa hat out and about and we got in to a nice chat with a newly transplanted expat from Australia who was heading to meet friends for a holiday lunch.  Of course, I get an even better reaction when I wear my panda hat.  I never saw so much enthusiasm as the spa receptionist's welcome when I was wearing my panda hat and gloves on our trip to get massages.  No one thinks it is unusual since cutsie animal wear is all the rage, but they do seem to puzzle over a foreigner in it.  I think it also made quite an impression at home in the states, but people had to struggle between curiosity and those pesky western mores telling them not to stare.  (By the way, even though we spent Christmas in China--as you can see, we got in to the holiday spirit back home first and celebrated early with the family.  Now you see where I get it from!  They encouraged me to buy the matching Panda gloves at Claire's.  Here we are in all our finery at the Williamsburg Grand Illumination.) 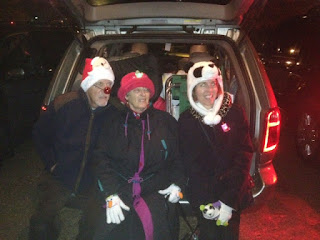 Back to Christmas in China...we began scoping out all the holiday options.  Our choices seemed endless, especially if we wanted to eat and drink until we popped.  Every restaurant seemed to be offering holiday dinners and festivities.  The major hotels all have large pre-set dinners and drinks, often including entertainment and the ubiquitous "lucky draw" and prizes.

Side bar:  To give you an idea about the cross-cultural popularity of chances to win (and I won't say the cultural phenomena because it seems to be pretty universal if Powerball, El Gordo, etc. are any indication that people universally love a random game of chance) the official receipts/invoices here contain a scratch off chance to win.  Why?  Apparently, it was an effort to encourage people to actually report income and sales, instead of the more common practice a number of years ago of skirting taxes at all times--what better way to encourage people to demand official receipts?  Give them a chance to win something!  P.S., you ask for the "fapaio" to get this official receipt (with the ever-present red stamp).

We started off the holiday season by joining in Santa Con 2012.  What a great way to get in the spirit!

For holiday eating, we scoured the magazines and online postings and finally decided to try El Willy, one of Shanghai's most well-known Spanish restaurants, for Christmas eve dinner.  We love El Willy's "younger brother", Elefante, and have enjoyed many good meals there.  Our six-course Spanish meal with to-die-for views of the Bund made for a great Christmas eve.  We had also discovered one of the best holiday deals in town--a 98 RMB (about $13) all-you-can-drink "happy hour" running throughout the holidays at The House of Roosevelt's rooftop deck.  The setting cannot be beat and they have glassed in the deck to make it nice and toasty for winter.  With the price, you can enjoy a cocktail or two with a view that is worth the price of admission.  On Christmas eve, they had a supposed "Christmas film" night, which consisted of a screen in the corner showing some random cop flick.  Not exactly the Christmas movie we expected, but it was more fun to watch the neon lights of Pudong and the varied crowd celebrating.

We started out Christmas Day Skyping with family back home--Christmas eve their time.  Unfortunately, bad weather changed their plans so we only got to Skype with half of one group and caught the other group rushing off to beat the icy road conditions.  When our ayi arrived to clean (the benefits of this not being a holiday here--cleaning on Christmas day!), we went out to enjoy some (cold) sunshine and visited the European Christmas market at Xintiandi.  It was enjoyable to walk around the park and check out some of the items for sale, but I don't know that this market really lives up to the standard.  There was plenty of random stuff to buy, but the Merry-go-Round was only for show and the entertainment consisted of taking your picture with a Garfield or Gangnam Style cut-out (which I had to do, of course, because nothing says Christmas like Gangnam Style). 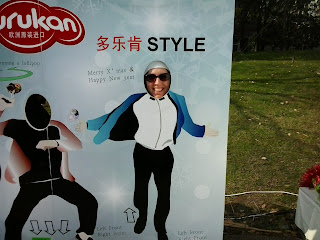 For Christmas dinner, we had decided to order from our favorite online organic grocery store, Fields.  They were offering various holiday meals and we got a dinner suitable for 4-6 and invited our new neighbors to spend the evening together.  Fields usually delivers within about a 4 hour time block, but were nice enough to get more specific for us so we could have the meal warm and not have to deal with reheating in our limited kitchen.  As we sat chatting with our neighbors, the doorbell rang and our feast arrived.  We had a whole chicken, stuffing, mashed potatoes, brussel sprouts, purple cabbage, squash and pumpkin pie.  Every bit of it was delicious, and we ate heartily with plenty left over.  We enjoyed the company of our new neighbors and getting to know each other better, as we all adjust to living in our "home away from home" adopted Shanghai. 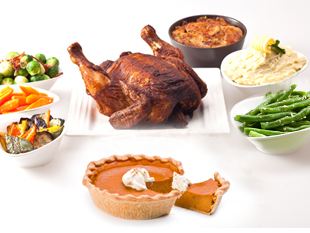 We received a nice Christmas bonus when our realtor came over Christmas morning to help us figure out the TV that we have never been able to work.  We can now watch our movies on the big screen, instead of the tiny little laptop!  And, with newly purchased speakers, we can hear the movies better and could play our thousands of Christmas carols while we enjoyed dinner.  We finished off our Christmas with a favorite holiday movie, Love Actually.  Don't worry--we also watched that great American classic, Christmas Vacation, the next day.

Now...on to the bigger holidays here!  Chinese New Year will be something to behold, and from what we hear 12/31 is not too shabby either.  We have a "front row" view from Hyatt on the Bund to watch the fireworks and stay out of the cold.

Wishing everyone everywhere a peaceful and joyful 2013!
Posted by Samie at 3:21 AM