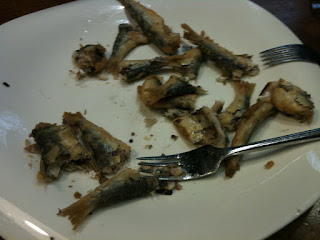 I'm an admitted food lover and discovering the foods of a place is one of my favorite parts of travel. However, even I have been pleasantly delighted by the food in Spain. Bryan mentioned the other day that it was one of the things that had most surprised him about our visit--he had thought he would find things to like, but never expected it would be one of his favorite things about the trip (big praise from a non-food obsessed traveler). I am looking forward to our visit to Italy, well known for its culinary delights, but I think Spain has been underestimated in this area. Though tapas are increasingly popular in the U.S. and I have been to some nice Spanish restaurants there, it is so different having the food in the native land.

First, we are in the Valencia region--home of paella. So, of course, we have had quite a bit of outstanding paella. If you get served paella too quickly, you will know it is not authentic. It is a dish that takes time...simmering in a huge, flat pan--preferably over an outdoor stove--until the rice must be scraped off the bottom of the pan and all the ingredients are infused together. There is an art to serving it--scraping the rice with a fork and spoon and giving you the proper portion of the protein (be it chicken, seafood...) with the rice.

I have mentioned before that jamon (ham) is huge here and I plan to post a collage of pictures to illustrate because I don't think words can adequately explain the obsession. I will say as a non-pork lover, the quality jamon here is something special. The iberico bolleta (black-hoofed) pigs are the most prized--raised in an idyllic setting where they graze on acorns, they have a unique flavor and are at the top of the culinary food chain as it were. You will see their large legs hanging in grocery stores, roadside food stands, bars and restaurants. We sat in a famous little bar, Las Teresas, in Seville sipping a wine before our Flamenco show, admiring the juicy ham legs with little triangular dishes attached to them to catch the drips. This all would have sounded like a nightmare to me if you had described it to me prior, but instead it is such a part of this wonderful culture. Sliced paper thin (using a special knife and a device specifically designed to hold the ham leg--and yes, Las Teresas had a memorial to their old ham knives with them placed on a plaque with the dates of service listed), sprinkled with the EVOO made throughout the region, and served on its own or on some crusty bread. You can't compare the taste to any other ham.

Bryan mentioned the free tapas in Granada. I believe it was a big reason I became obsessed with us needing to find a way to live there for a while. Perhaps it was the city overall--the gorgeous scenery of the Sierras, the Alhambra, the cathedral--but the tapas sure helped. Probably one of my favorites was the big plate of fried sardines, which arrived just as we were feeling ready to pop after a night of many free plates. Fried fish is a big specialty in Andalucía and it is generally done quite perfectly...something I would rarely say of fried seafood.

It is interesting how customs vary from city to city and region to region. Free tapas are big in Granada, and occasional in other spots. In Denia, we often get bread included with our meal and free something, such as olives or peanuts, with a drink, but in most of Andalucía, you are charged for cubierto y pan (cover and bread) which is brought to you automatically. Being one who likes bread, the miniscule charge is worthwhile. I often forget, though, that the bottled water (sin or con gas--without or with bubbles) will probably be as expensive as the house wine--not unlike a good # of places throughout the world, though.

I have also mentioned wine before and have to comment on it again. Spanish wine, though gaining popularity, has been far underestimated. Or, as our host surmised, under marketed--when compared to French or Italian wine. Same goes for the olive oil. As an example, I bought a huge plastic jug of extra-virgin grown locally (at a roadside travel center!) for 7 Euro-delicious. The same roadside stops sell all manner of local products in their stores, as well as having self-serve restaurants/bars where you can stand around and get a delicious cafe (or cafe con whisky as all the truckers seemed to do), sandwich or full menu del dia, with a bottle of wine, served with real flatware and plates-no plasticware here. Quite different than the fast food and gas station stops at home (though you have the McDs and Burger King options here as well, though usually in mall areas). Such a stop is where I picked up the delicious Vino cookies. Those are second favorite, but more reasonably priced than the olive oil cookies that I love most.

Of all the food, the fresh produce at the local market and the plentiful seafood are what delights me most. In Denia, there is a red shrimp locally famous that has to be the sweetest and most tasty I have had. Mussels, langoustines, all types of fish...and that's all without having been to the daily fish market, which we somehow continue to miss. We had perfect "variegated scallops" (the English menu's translation, really a type of clam) in Jerez, with just a touch of olive oil and the local sherry. I tried the popular adobo fried fish in Granada, which was unfortunately so good that I overdid it a bit and the huge portion of garlic marinated, fried fish and potato chips was a little much for my stomach.

Even the grocery store holds many delights for me. A few favorites are the fresh baked bread at our closest grocer, the canned white asparagus (local), cartons of Salmarejo (like a creamy gazpacho, though the creaminess comes from the addition of bread--well known in Cordobo/Andalucia), goat cheese and a whole array of regional cheese options, and the canned mussels or tuna in olive oil.

Obviously, I could go on and on (and do). I was reading a story in Spain on my Mind (a collection of short stories and excerpts) this morning by a food writer about his visit to the Santiago area for his favorite local peppers (pimientos de Padron) and could truly relate to his "Register of Frustration & Deprivation"--foods that are rarely served outside of their territory of origin (or not well) and he therefore cannot get at home. Is it wrong that I am already formulating that list in my head for my return to the U.S.?