A roadtrip across the South of Spain 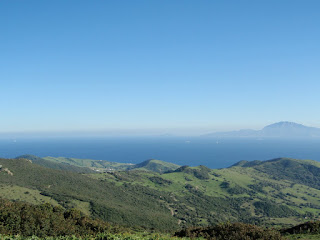 Our recent bus trip to Gibraltar introduced us to the Andalucia region in the south of Spain and showed us just enough that we wanted to see more. We decided to go back on our own this time, with a rental car, to spend a week in the region to sample its diverse towns, cities and history. It also provided a very convenient way to take the ferry across the Straight of Gibraltar to Morocco and spend a day in Tangier. Morocco post here.

Our first stop in Andalucia was Granada, a wonderfully large and diverse city with a very different feel than anywhere we've been so far in Spain. Granada is overlooked by the snow-capped Sierra Nevada mountains and the Alhambra--an ancient and grand Moorish palace. After finding our hotel and getting settled in the Albacin district , we started to explore the city's many plazas, shopping districts and tapas bars. It is entirely possible to never be hungry in Granada and never spend a cent on food. Every restaurant provides free tapas when you order a drink. We've seen this throughout Spain, but it's really just a nibble of peanuts, olives or potato chips. Not really all that different from the US, except here you never have to ask. In Granada however, you get a full size appetizer. Usually hot, delicious and whatever they want it to be... meat stew, deep fried fish, deviled eggs, jamon sandwiches, veggie or potato salads, tuna and so forth. Point being, you could pay for food in Granada, but why? We went into restaurants, sat at the bar and ordered a glass of the cheap house wine each (which is very very good and at most costs about $4) and got enough uniquely different and fantastic tapas to fill us up along our “tapa tour”. 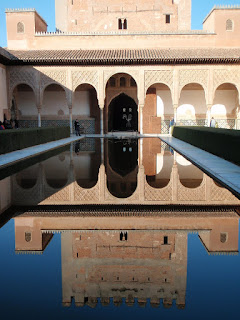 Personally, I think the free tapas are just an attempt to lure you from The Alhambra. The place is massive, meticulously landscaped and what an incredible history. It was first built by the Moors in the 700s when they occupied southern Spain, then the Romans, English and every other Empire along the way. You can see the influence of each as the place just seems to never end. From the oldest and highest spot, the bell tower, you have the best panoramic views of the city. We spent about four hours there and although we covered all the points on the free map they give you upon entering, we still feel there was so much more to see.

The city is a modern thriving metropolis with ancient buildings, churches and history as its backdrop. From the narrow pedestrian malls to the city squares, it is definitely a must-see in Spain. 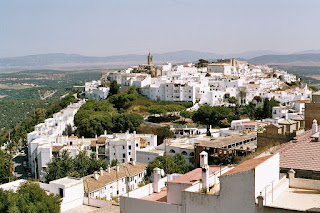 We were there in the off-season, so it's mainly just locals. All of the houses and buildings are painted white in this multi-tiered town. Getting just a bit lost on the way in, thanks to GPS, we found our hotel by getting in taxi only to have the cabbie laugh as we told him our destination. It was literally right around the corner. It technically was faster to walk there. Our hotel was an old convent remodeled into a hotel. Vejer has authentic Spanish restaurants and, surprisingly, modern bars and shops mixed with an ancient castle and churches over looking Andalucia – one can only imagine this “frontier” town in the days of the Catholic reconquest of Spain.

After a short drive, we were at our next stop on the journey – Jerez De La Frontera. 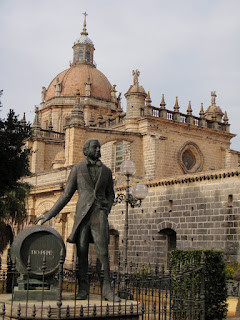 This region's claim to fame is Sherry. As we were there in the off-season and a Sunday, there was not a lot going on. However, we saw the town's Sunday flea-market - really a giant yard sale. Most people had a small table or two selling used books, old bottles, nicknacks, clothes, stuffed animals and old electronics including VCRs, cell phones and power adapters. It seemed every other table had an electrical spaghetti of random power cords for all kinds of unknown devices. It was such an odd assortment stuff. I guess the phrase - “la basura de uno hombre es el tesoro de otro hombre” applies in Spain as well.

We took a tour of the Tio Pepe Sherry bodega (the largest in Spain) and learned about the history and process of Sherry and Brandy making. It is interesting to note that you will not find a year of production on a bottle of Sherry. Each bottle is made with several year's vintages so that the quality will be consistent even if there is a bad harvest in any given year.

We tasted some Sherry and after Siesta, we enjoyed a great dinner at a local spot recommended by our hotel, La Cruz Blanca.

The last stop on our Andalucian tour was Seville, or Sevilla here. 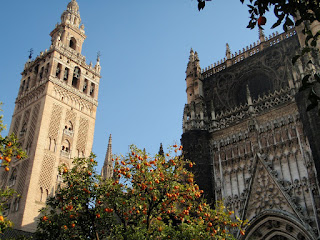 Once the Capitol of Spain, and from where Christopher Columbus sailed before discovering America in 1492. Seville is also the home of the largest gothic cathedral in the world, which is home to Columbus' grave. Our hotel was right in the middle of town and was very convenient to check out the city by foot. We toured the cathedral, the bull fighting ring and museum, as well as taking in a traditional Flamenco show and of course, ate some really great food.

From Sevilla, it was short 8 hour drive (which I did in 7) and we were back home to Dénia. What an awesome week.
Posted by Samie at 6:32 PM