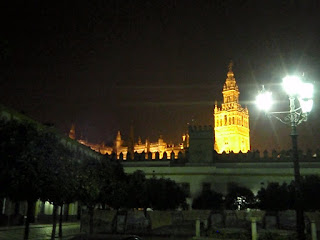 Before the trip is too far from my mind, I wanted to share a few favorite finds and recommendations from our Andalucia trip.

My first advice would be to be fully prepared for the adventure of driving in Spain if you choose to rent a car over here. It is ironic that such a relaxed culture in which people stroll as if without a care in the world, turns out some pretty wild drivers. Apparently, there is a big effort to make roads more safe and your tour company will warn you to vigilantly follow speed limits and signal...but sometimes you feel you are the only one doing so (even in radar spots, where they warn you constantly, people fly by you). Interestingly, drivers generally seem very courteous about passing and staying out of the fast lane when driving slow. My feeling is that the speedy driving is not of the road rage, harried variety we might see in the States, but just the norm leftover from days of little speed controls and wild terrain.

The highways are in great shape, especially the toll roads (not cheap) and thing are well-marked...but there is some mystery to the road signs. All roads appear well-marked, but you will be missing just the sign you need at the decision point. Signs never use directions such as X road North, but instead use cities as references--confusing in unfamiliar territory. My advice would be to forget GPS and carefully map things out with an online program, and perhaps get a good road atlas. The GPS gets quite confused and either way, expect to make a few wrong turns. The cities are another situation...and the best thing to do is either not have a car at all, or park as soon as you see a garage and enjoy walking and public transportation. Many of the ancient areas of the cities (i.e. tiny cobblestone streets, windy hills) limit traffic to taxis and those with special permission and three of our four hotels were down alleys open only to foot traffic. I was super thankful I had a great driver as I would have quickly given up, but I'm no good at driving manuals (and that's all you'll be able to rent here for the most part) even in familiar territory.

Granada is a lovely city where one could spend several days at minimum. The Alhambra alone is worth almost a full day, but don't come without some planning as they limit admittance and tickets can be impossible to get if not purchased ahead. You are assigned a specific time for entry to the main palace and have only a 1/2 hour window to enter. You can see the rest of the grounds and buildings before and after that timeframe, and expect it to take several hours. All the walking is worth it, though, as this site is truly indescribable. I got a big thrill out of the plaque stating "Washington Irving slept here" after reading his book in preparation for the trip.

I would also highly recommend the walking tour, "Cicerone", which meets at 11 AM on the Bib Ramblas. Our tour was done in English and Spanish and our guide led us through town illustrating the exchanges of power that have made up the city and country's history. Of course, you could spend days and evenings just strolling, shopping and enjoying the free tapas as well.

A friend recommended the white hill towns to me before our trip and this was one of my favorite choices. We stayed in Vejer de la Frontera (you'll see de la Frontera attached to many of the towns, meaning on the Frontier). Driving there we stopped at an overlook with the best views of Africa and the deep blue waters of the Med and Atlantic. The drive was stunning, through an area famous for windsurfing and past the hundreds of giant windmills that would have stopped Don Quoxite in his tracks. Climbing up the windy hill, we arrived at a white washed, walled city and parked our car to climb the pedestrian-only streets of the town. We stayed in an old convent--Convento San Fancisco, a lovely spot that I would highly recommend. We didn't spend much sightseeing time in the city, as this was our jump off point for taking the ferry from Tarifa to Tangier, but it was a pleasant place to spend the evenings with some lovely food and a very local crowd.

Being a Sunday in the off-season, the land of sherry, Jerez de la Frontera (sherry being the English attempt at pronouncing Jerez) seemed pleasantly empty of tourists, except the large group of American college students with whom we took our sherry tour (Tio Pepe bodega). The hotel, Casa Grande, was absolutely beautiful--spacious, historic yet with a gorgeous modern bathroom (jacuzzi tub-a rarity!) and attentive staff (of course, we came to believe we were the only people staying there and I don't mean that figuratively).

We could have used more time in Seville perhaps as it has that great combination of modern (although a little too much modern with the smog) and ancient, with more sights to see and more time to be spent strolling. The Flamenco show at Casa Memoria de la Andalus was one of my highlights. Flamenco options abound, but this is one of the less touristy options and truly moved me. The singing is haunting and bring to mind the Muslim call to prayer with its Moorish roots. The dancing is amazing, especially that of the male dancer, who does the more elaborate footwork and powerful steps.

Seville's cathedral is the third largest in the world and holds Christopher Columbus' tomb. Take a deep breath while admiring its beauty, and prepare for the climb to the top of la Giralda. This minaret was originally used for the Muslim call to prayer, before this became a Christian cathedral, and the view from the top is worth the sore legs.

The Hotel Alminar was one of my favorites of the trip. Located in the heart of everything, down a pedestrian street, this small historic building has modern style and nice touches included like tea and coffee in the lobby, beverages in the minibar, and a great breakfast spread. A few steps out the door and you are at the cathedral. Turn the other way and head to some great shopping or take a short stroll to the riverfront, where you will find crowds of people enjoying the paseo.

Even though our time was too short, we snuck in a visit to the bullfighting ring and museum. The tour guide informed us of the history of the ring and many interesting facts about the sport.

When you think of Spanish culture, you most likely think of Andalucia. It is worth including in your itinerary and easily accessible with the high speed trains from Madrid.
Posted by Samie at 6:08 AM