A Taste of Africa


During our recent week in Andalucia, we took a day and went to Morocco. There is a fast ferry service that leaves from Tarifa, Spain (about 30 minute drive from Vejer de la Frontera), across the Straight of Gibraltar to Tangier, Morocco and this was our first time setting foot on the continent of Africa.

We arrived at the port and, after a slight miscommunication, met up with Aziz, our tour guide and host for the day. We found him through Rick Steves' Spain guidebook. We started our tour with a van ride through the outskirts of the city. 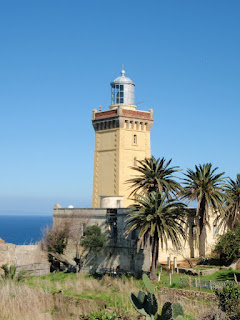 We saw "the high rent district" where several Middle Eastern Kings and Princes live, and the African coasts of the Atlantic and Mediterranean, as well as the lighthouse on the most northwest point of Africa where they meet. We had the obligatory stop to see camels and toured the ancient caves along the coast.

When the driving part of the tour ended, we were dropped off in the center of the city. This city is a fascinating melting pot of society. So many people with different backgrounds, cultures, religious and political beliefs, and personal styles all fitting in and living together peacefully. The Christian church sits on the same block as the Synagogue and Islamic Mosque. As our tour guide said, "Anything goes here. We don't judge each other, everyone does (dresses, worships, lives) what they want to" and it seems to work. There is a tolerance, like nothing I've seen before and would challenge a lot of people's preconceived notions. It is peaceful and more diverse than one could imagine. I guess we Americans could learn a thing or two.

Aziz described the many changes the young, progressive King has brought to the country and Tangier especially. Soon the port where we arrived will be a marina for luxury yachts, and much industry has been built in a new port on the outskirts. Unemployment is way down, and new companies are coming to town. The role of women has progressed quite a bit as well, though Aziz admits there is a way to go. The Queen is the first queen to be seen in public, was a commoner/love marriage and trained as a software engineer...representative of the new guard.

We wandered through the local food markets, which was an overload of the senses. These markets sell everything and everything fresh. In Tangier, you go to the market daily to buy what you will need for the day. We started at the seafood market, there were boys peeling shrimp, men cutting up fish, fresh squid staring at you from the counter. Then we moved on the meats which were just as fresh, bloody and waiting to be purchased. Everything but pork here... understandably, but it was quite a difference from Spain, just a few miles away. Vendors were selling fruits and vegetables, olives, spices and the old Berber women sitting on the floor selling fresh milk and eggs. Overall very different, very chaotic, but very worth seeing and understanding. Sadly, it put our very cool local market in Dénia to shame.

Being around all the food at the market had us ready for lunch, so our host took us to nice and very Moroccan restaurant, Nabada. We had some of the best food and service ever. I enjoyed a Pastilla, a chicken pastry topped with fresh cinnamon and powered sugar. Shannon had a couscous with chicken and vegetables. Both extremely tasty. The meal ended with a dessert of fresh oranges and sweet mint tea. We said ¨merci¨ and took back to streets to walk off lunch.

We wondered around the Kasbah and the souk markets. We enjoyed not buying a rug from the very polite, very well spoken but high pressure Mohammad. We saw the community bakers, bath houses and tailors. I exchanged a couple Euro for some Moroccan coins, my favorite souvenir. Most fascinating off all I think was the ¨Moroccan Yellow Pages¨ - day laborers that sit in the main town square. They sit atop their milk crates behind an artistic display of their trade. Plumbers have a sculpture of pipe and spigots, painters have their paint bucket and brushes on display, and so on... quite fascinating. With all of the different languages spoken here, this is truly efficient and effective.

Tangier was just a very minor taste of Morocco, and even smaller taste of Africa, we will most definitely return... I recall as we were finishing our late afternoon lunch, after excusing himself our guide disappeared for long while. We and the other couple on the tour with us, also American (from Maryland) noticed his longer than normal absence. It was at that point I also realized there was a distinct "chanting" that was being broadcast throughout the city, so loud it could even be heard even inside in restaurant. Our wonderful, friendly, trustworthy and sincere Islamic host had gone to pray. He returned shortly thereafter to finish our tour and personally escort us on to the boat back to Spain. As I reflect on his words "anything goes" and "no one judges", I can't help but be reminded that we Americans could maybe learn a few things about getting along with each other... and the rest of the world.
Posted by Samie at 9:39 AM